Overt Cautiousness from the Bank of Canada

At their July rate setting meeting, the Bank of Canada (BoC) attempted to strike a balance between optimism around the reopening of the economy and the improving outlook that accompanies it, with an expectation that the subsequent “recuperation” phase which follows is likely to be long, drawn out and bumpy.

Canada’s central bank indicated the target interest rate will stay at 0.25%, the BoC’s “effective lower bound”, until the 2% inflation objective is achieved. Based on their latest projections, the Bank does not expect inflation to reach that level at least until 2023. Additionally, the Bank’s purchase of Government of Canada bonds, known as Quantitative Easing (QE), will continue at a minimum of $5 billion a week until the expected recovery is “well underway” and “self-sustaining”. The BoC is clearly sending the message that monetary policy will remain accommodative for quite some time: in other words, providing forward guidance without explicitly stating it as such.

It’s interesting to see that the BoC is more cautious than the consensus1 on the outlook for growth, especially for 2020, as Table 1 indicates. The BoC expects growth this year to be 1% weaker than the consensus. Moreover, as Chart 13 pulled from the Monetary Policy Report (MPR) which accompanied the Bank’s announcement illustrates, even by the end of 2022, the Bank does not expect the Canadian economy to have the same growth trend that had been projected before COVID-19 derailed it. Another way of saying this: the output gap, which measures the difference between actual and potential economic growth, is expected to persist and remain into 2023. The combination of slower population growth as immigration is temporarily restrained, weakness in both business investment and labour productivity trends, along with struggling consumer confidence, will all weigh on potential economic activity.

As BoC Governor Tiff Macklem mentioned at the accompanying press conference, an unprecedented shock requires a historic response and the BoC intends to keep monetary policy accommodative for the foreseeable future until their inflation and growth objectives are achieved. 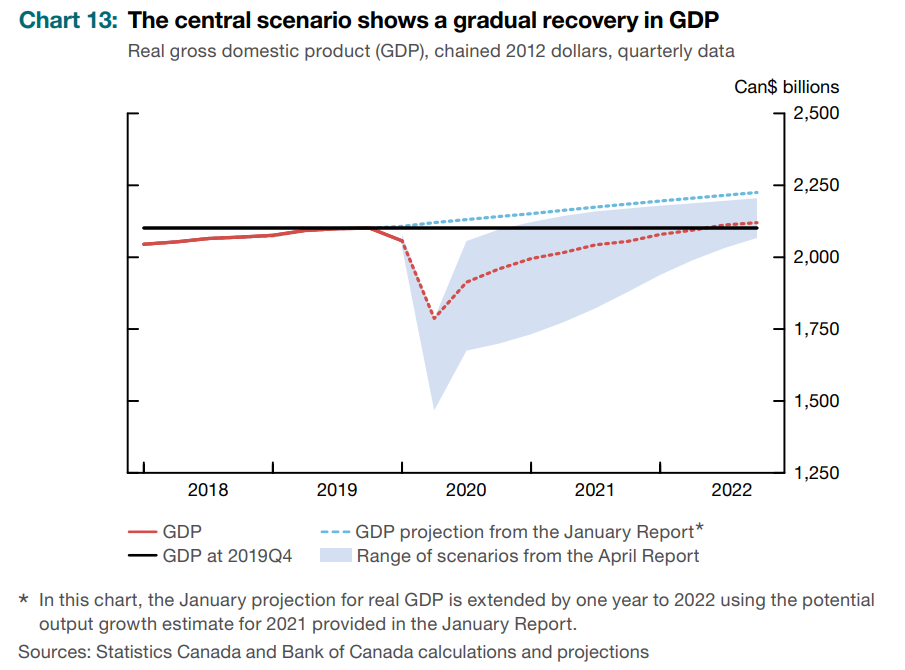 Regarding Inflation:
Firms have been heavily discounting some products to clear out undesired inventories that built up at the height of the pandemic. At the same time, there is only limited evidence to date of firms marking up their prices to cover the increased costs of doing business during the pandemic. Despite these additional costs, respondents to the summer Business Outlook Survey stated that they intend to raise prices less than last year and operate with smaller margins to remain competitive. Combined with low energy prices, these forces are expected to keep inflation weak in the near term.
In the central scenario, the path for CPI inflation over the next year largely reflects the influence of energy prices. The dramatic decline in these prices in March and April will hold inflation down until early 2021. After that, the inflation outlook depends primarily on the speed and strength at which demand and supply recover.

Relating to Business Investment:
In the Bank’s central scenario, uncertainty about the composition and strength of future demand, elevated debt levels and lingering financial stress significantly dampen business investment. Across all regions and sectors, respondents to the summer Business Outlook Survey reported that uncertainty is weighing heavily on investment plans and suggested that their investment will remain weak over the next 12 months.

Investment and the Energy Sector:
Restructuring within the industry, ongoing since the 2014–15 oil price shock, is expected to continue. Oil production has been reduced and capital expenditure plans have been significantly curtailed. In addition, there are renewed questions about the likelihood of pipelines being developed. The central scenario anticipates that, with weaker investment in the face of reduced demand and low prices, oil production is now on a considerably lower path than before the COVID-19 crisis.

Outlook for households:
In the central scenario, household spending picks up gradually as containment measures are eventually lifted and confidence in the economy improves. However, caution persists. Thus, while the savings rate declines from its peak in the second quarter, it remains higher than in recent years.

The bottom line is there are encouraging signs the economy has transitioned from a recession and into an early recovery. That recovery, however, is likely to be fraught with challenges, requiring the central bank to maintain extreme policy accommodation for the foreseeable future.

1 Consensus represents the mean estimate from economists and other investment professionals.