A closer look at the (mis)behaviour in markets

The virus and associated government containment efforts have turned off entire industries and driven an unprecedentedly sharp slowdown in the U.S. and global economy. Financial markets have been very volatile as investors (unsuccessfully) try to think through the likely contours of the virus - as we’ve written about before, these epidemiological models aren’t very accurate. The situation in New York appears worse than models previously anticipated. But Italy and Germany may be within days of hitting a peak in new confirmed cases. And previously Erik Ristuben wrote about how China is carefully trying to come back online again.

What has definitely changed globally is the policy response to this pandemic. The combined support from fiscal and monetary authorities around the world has helped drive a partial compression in risk premia. Below is a quick snapshot of the percentage of peak-trough losses in various areas of the market had recovered by the end of March.1 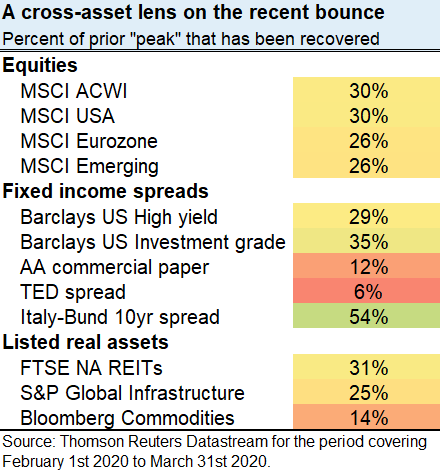 On the other side of the Atlantic, investment-grade corporate bond spreads compressed by roughly 100 basis points in the United States from 23 March to 31 March. What happened on 23 March? Well, the Federal Reserve (the Fed) announced a number of new emergency facilities, including the so-called Primary and Secondary Market Corporate Credit Facilities. With a combined $20 billion in equity capital from the U.S. Treasury Department, these facilities are scheduled to buy $200 billion in investment-grade corporate bonds. Again, a non-economic buyer stepping in to backstop the cost of financing.

Big picture: we don’t know what is going to happen with the coronavirus tomorrow, or next week or next month. But areas of the global market that have demonstrated some success from their containment efforts and/or areas that have very strong policy support have shown some incremental improvement here. Today’s selloff makes it clear that we are by no measure out of the woods yet. But we’re encouraged that some of the preconditions for an eventual recovery are falling into place.

1 This table is just one of many ways that an investor can quantify the extent of recovery following a market selloff. Using investment grade as an example, spreads have compressed nearly 100 basis points from 23 March to 31 March. That represents a 35% recovery of the peak-trough 283 basis point spread widening from 19 February to 23 March. 100 divided by 283 gives us the 35% shown in the table.