As the summer holiday season approaches, Van Luu explains why the euro looks attractive for multi-asset portfolios in the long-term.

Don’t overlook currency management in a multi-asset portfolio: Spotlight on the Euro

As the holiday season approaches and people set off to catch some summer sun (Greece, Italy, Spain anyone?) it seems as good a time as any to look at how the euro is faring, and what we think is in store for the rest of 2017.

At Russell Investments, we closely monitor the risk-reward profiles of individual currencies. This ensures that we are continually able to take advantage of opportunities as and when they arise. Amid a period of impressive performance since the beginning of the year, we are becoming more and more constructive on the euro. Here’s why.

Political risks are fading in Europe

While earlier elections in the Netherlands and Austria did not end with populist victories, the biggest win for the euro came after France’s presidential election. Macron’s victory over his Eurosceptic rival Marine Le Pen of the National Front not only boosted the euro exchange rate (in a sort of relief rally), but it eliminated the tail risk of France departing from the single currency.

We do believe the upcoming German election in September is likely to see the continuation of Chancellor Angela Merkel’s time in office. A refurbished Franco-German engine can now revive important reforms including the banking union and permanent stability mechanism. And in the face of Brexit, unity between France and Germany is important to safeguard the future of the monetary union.

Fading of political risk pulls euro higher against US dollar 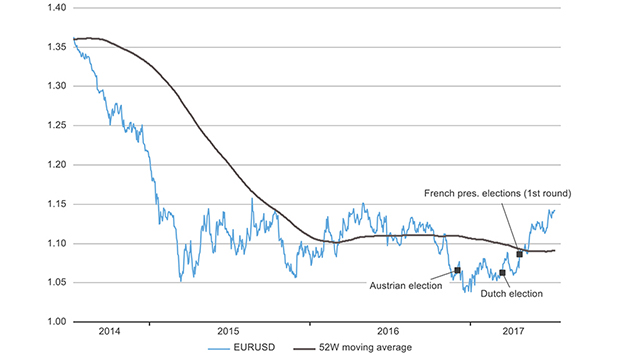 Political headwinds for the euro are not completely gone with the Italian elections expected in the spring of 2018. According to the latest poll by Italian firm EMG, the Euroskeptic Movimento 5 Stelle (the Five Star Movement) are currently polling strongly as participants expect the party to take 27.8% of the vote (as at 17 July 2017).1 However, pro-euro and pro-globalisation parties and politicians are on the rise in the countries of the single currency area, contrasting with the rise of populist movements looking to restrict free trade and migration in the U.S. and the UK.

We always asses the outlook for currencies through the lens of our Cycle, Valuation and Sentiment framework

Negative interest rates and quantitative easing (QE) still weigh on the euro. However, we believe the European Central Bank’s next move will probably be to extend, but reduce its bond purchases in 2018. If the currency markets firm up their view that the eurozone is past the peak in QE, this could be perceived as a positive for the euro.

On the fiscal and structural policy front, President Macron may be joined by a re-elected Chancellor Merkel to push for a reform of the eurozone institutions. The news is also good on economic front. Gross domestic product (GDP) growth continues to accelerate and is close to 2%. Consumer and business confidence are riding high and credit growth is positive. As a result, consumer spending, corporate investment and housing are all doing well. 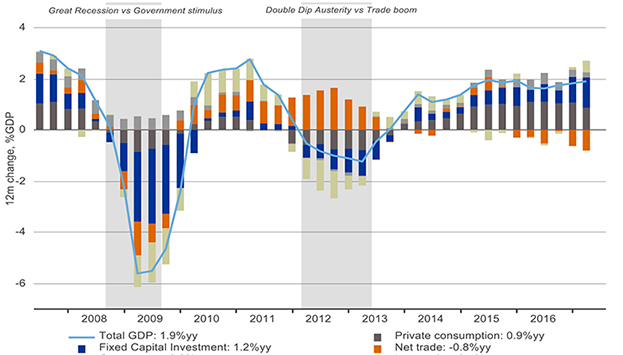 On top of this, companies are reporting strong earnings growth driven by both margin and revenue expansion. Given euro-friendly political, economic and business developments, our cycle view on the euro is positive. 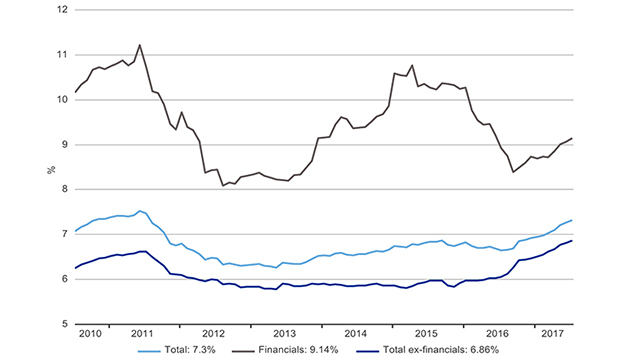 The European single currency is supported by attractive valuations, and the euro trade-weighted exchange rate is low compared to history. The euro (EUR) is also cheap vis-à-vis the U.S. dollar (USD) from a purchasing power parity (PPP) perspective, as shown in the chart below.

Using PPP data from the Organisation for Economic Co-operation and Development (OECD), a representative basket of goods would cost the same in both the eurozone and the US if the EUR/USD exchange rate was at 1.30 (the black line). At the current market exchange rate of 1.14 (as at July 12, 2017), the EUR is around 14% undervalued against the USD. 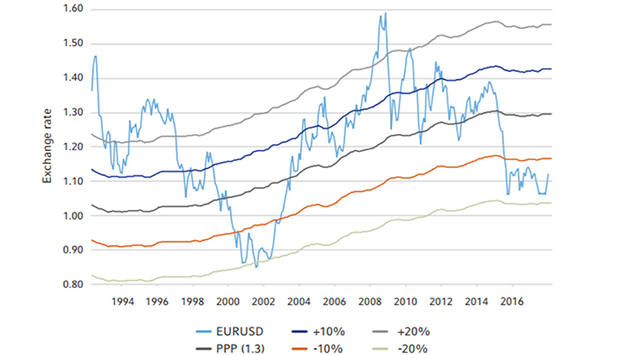 Sentiment for the euro is positive. The currency has enjoyed a solid recovery since the beginning of the year (up 8.4% through 12 July), particularly after the French elections. In the last 18 months, EUR/USD has tested the region between 1.03 and 1.05 three times, and this level has become a strong technical support. On the opposite side, the euro has not been able to decisively break through 1.15 and some resistance can be expected as we approach that mark. However, given the underlying momentum and support from Value and Cycle factors, a breakout of EUR/USD above 1.15 sometime in 2017 is now our main scenario.

Our optimistic view of the euro implies different courses of action for a multi-asset portfolio, depending on your home currency. In portfolios that are denominated in pound sterling, we recommend that exposure to euro assets remain unhedged. That way, UK-based investors can benefit from the expected strengthening of the single European currency. For euro-based portfolios, we strongly advise due consideration is given when hedging any foreign currency exposure.

And if you are heading to the continent for your summer break, don’t put off getting your euro spending money at the bureau de change.

Any reference to returns linked to currencies may increase or decrease as a result of currency fluctuations.
Any past performance figures are not necessarily a guide to future performance.