When was the last time a client didn’t ask you what effect Donald Trump might have on markets? In all likelihood, it was some time ago, which means it is probably best to have an answer up your sleeve. An answer that is more helpful than a shrug of the shoulders would be better still.

The thing is, the President’s actions are not really that unpredictable. The timing and subject of his Tweets may be haphazard, but in terms of concrete action he is a model of predictability. So far, he has been almost faultlessly faithful to his campaign pledges:

The list is expanding almost daily. The point is, if we rummage around his manifesto pledges, we can form fairly reliable opinions on what he is going to do (Congress permitting). Armed with that knowledge, investors can make some informed guesses about the direction of the US economy. David Vickers, senior portfolio manager at Russell Investments provides a few pointers, below.

President Trump has deliberately set out to ignite animal spirts. He has pledged to reduce taxes for corporations and individuals, to tear up financial regulations and to withdraw from all environmental treaties. This is all music to the ears of Corporate America and to small business owners in particular. US small caps have rocketed by 40% since Trump was elected and small business confidence is at a 12-year high. The signs are positive for US stocks, although any pullback of the Trump agenda could produce a strong, negative market reaction.

Will trade grind to a halt?

Trade is a big Trump issue. Trade agreements with Europe and Canada, on the table for years, are likely to be abandoned and a bilateral system put in place instead. The President has repeatedly accused China of manipulating its currency, of stealing US patents and of taking American jobs. China acts with reason, in normal circumstances, but its leadership will not stand being humiliated in front of its own people and in the eyes of the rest of the world. A trade war is possible. However, as Vickers says: “Everyone loses in the case of a trade war, but I don’t think it would signal the end of world trade. Globalisation has gone too far, it is too entrenched.”

There will be clear losers

Trump’s Make America Great Again campaign translates into a clear set of winners and losers in the corporate world. This is already impacting stock selection. To put it in simple terms, Trump intends to penalise companies who import a large proportion of their goods and raw materials. Penalties are designed to encourage companies to build in the US and employ US workers, thereby boosting the employment rate.

Border adjustments: winners & losers in the US 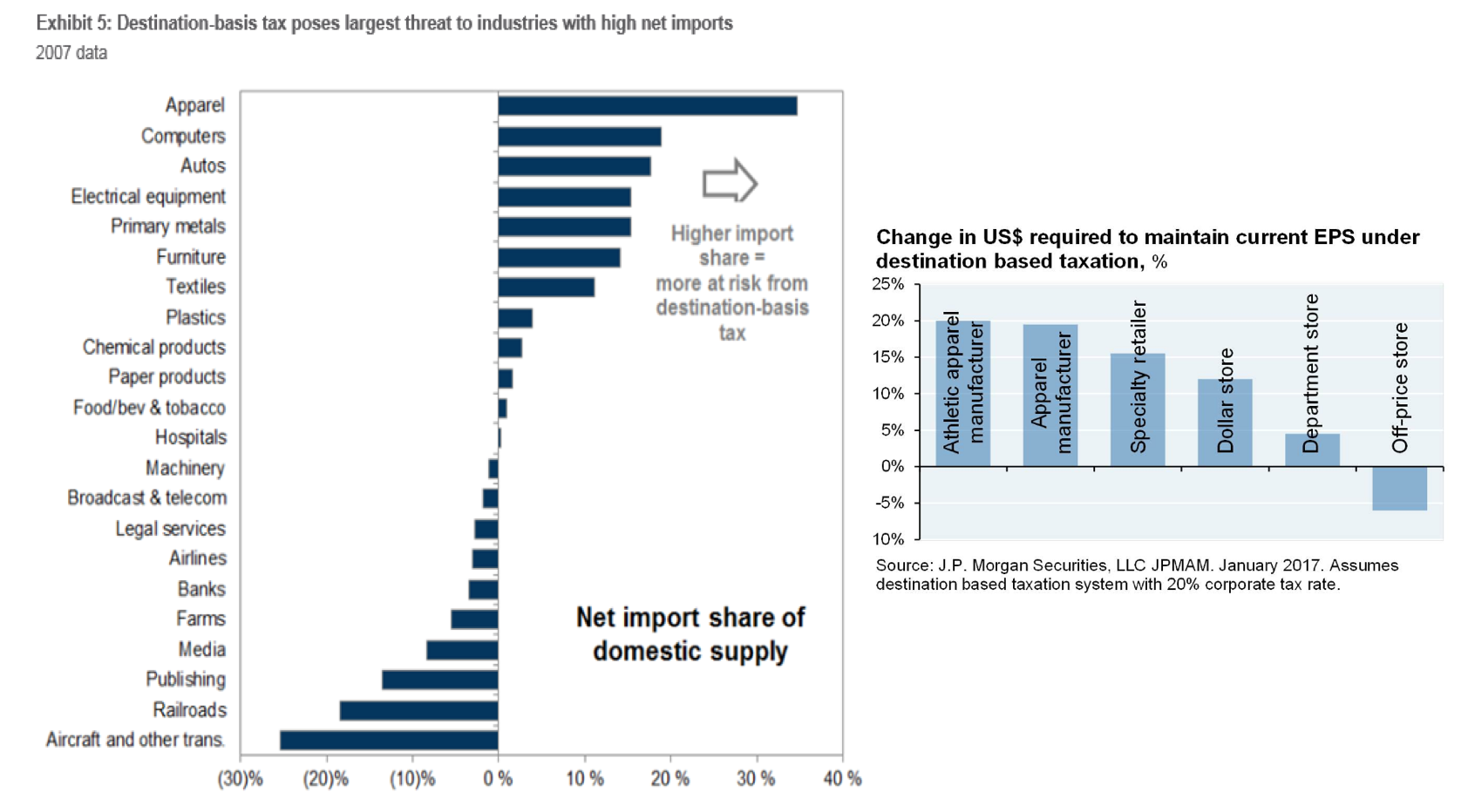 If you are a domestic company and export a lot abroad, the net effect will be positive. Domestic companies that sell to domestic consumers will also do well. But US companies that rely on imports may face tariffs which could substantially reduce profit margins. This group is led by clothing (apparel), computers and autos. At the happier end of the spectrum, are aircraft and railroad manufacturers.

The other big impact is on emerging markets. If the dollar appreciates by 10%, emerging market companies are suddenly saddled with 10% more debt. Although emerging currencies are under-valued at the moment, the Trump effect could produce a shorter-term pullback.

Trump’s policies are not unlike those of Ronald Reagan in the 1980s. Reaganomics produce a huge dollar overshoot, as can be seen below.

Could there be a 25% upside

We are not convinced 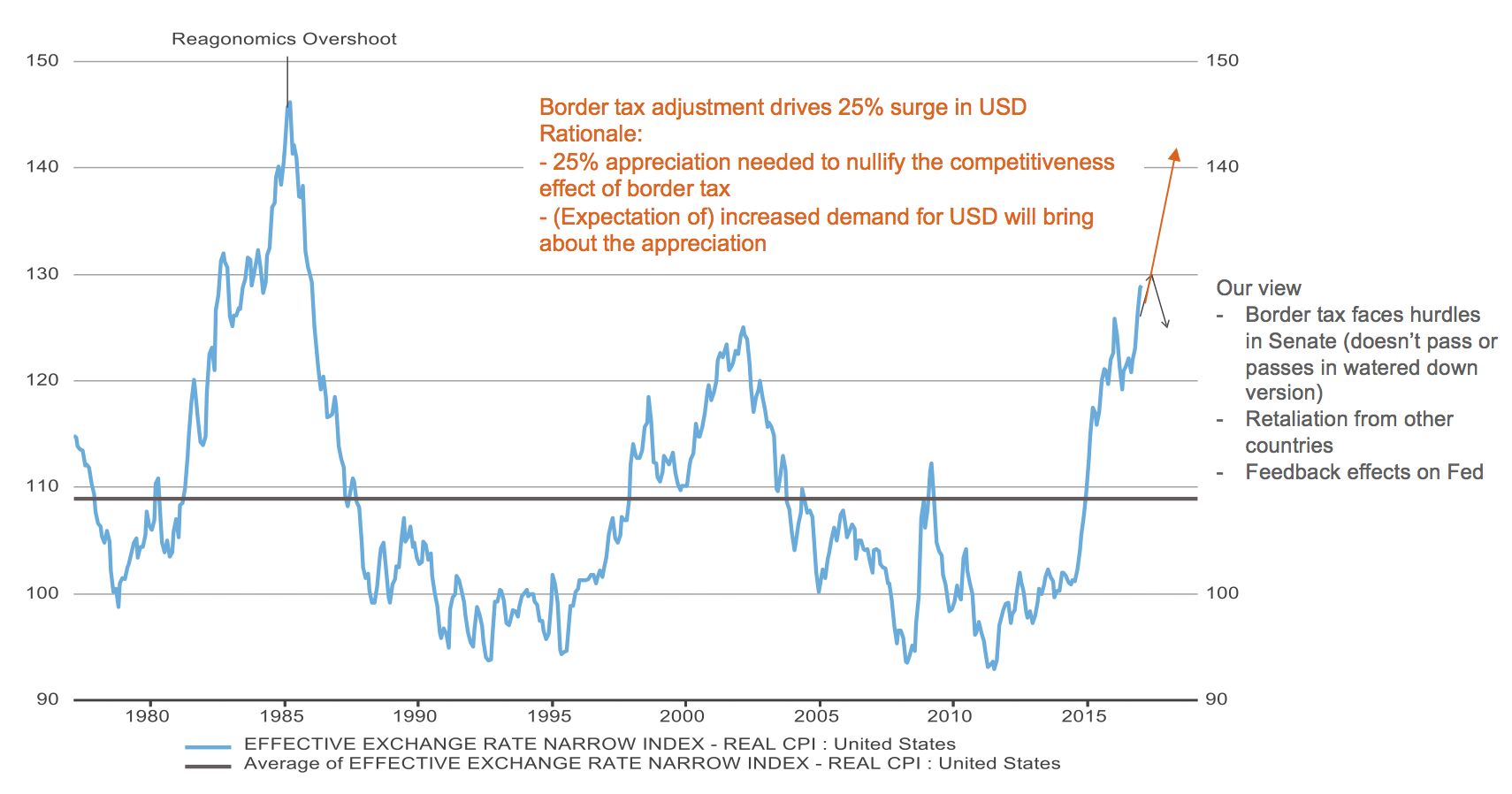 The overshoot is unlikely to be quite as sizeable this time around, but it could be large enough to impact stock selection. In short, call the dollar right and you will win big.

Active managers back in vogue?

Active management has been much maligned in recent years. It has been accused of closet index-tracking and poor value for money, and has lost significant market share to cheap index-trackers. In the US market, the accepted wisdom is that the relative transparency and volume of research means it is hard to generate alpha. Now, with changing correlations, the opportunity set suddenly seems rich and only active management has the skills and flexibility to exploit the idiosyncratic risks arising.