The tide may be turning: 2 reasons to favor Europe and Japan over the U.S.

It’s easy to see why some investors have been enamored with U.S. stocks (represented by the Russell 3000® Index) in their portfolio over the past 5 years: They’ve done really well. Compared to returns in Emerging Markets, Europe and Pacific (represented by MSCI Emerging Markets Index, MSCI Europe Index, MSCI Pacific Index, respectively) over the past 5 years ending March 31, 2016, the U.S. stock market has dominated, with an annualized return of 11.1% versus the next closest region (Pacific) at 3.0%. But biases within a portfolio can be limiting. Historically, it has often been the case that when assets are out of favor – like Europe and Emerging Markets have been recently – their price eventually drops to a point that offers better value and opportunity going forward than the assets that have most recently been in favor. Regional performance for the previous 5-year period, ending 2010, is a visual reminder of exactly that dynamic: market leadership rotates and what happened in one period doesn’t forecast what will occur in the next one. In 2010, Emerging Markets had been the leading region for 5 years, with an annualized return of 13.1% (MSCI Emerging Markets Index) while the Pacific lagged at 1.8%.

As of March 31, 2016 Sources: EM – MSCI Emerging Markets Index; Europe – MSCI Europe Index; U.S. – Russell 3000® Index; Pacific – MSCI Pacific Index. Indexes are unmanaged and cannot be invested in directly. Returns represent past performance, are not a guarantee of future performance, and are not indicative of any specific investment.

While the U.S. has been the dominant region lately, Russell Investments currently sees more potential opportunities in Europe and Japan in the coming year for two reasons:

Central bank policies around the world have begun to diverge after years of coordinated stimulus. Supportive monetary policy introduced in response to the Global Financial Crisis has lifted stock markets globally. The U.S. Federal Reserve (Fed) was the first to implement monetary stimulus in 2008 and became the first to start unwinding it as of 2014. Following a first rate hike in December 2015, Russell Investments’ North America investment strategist, Paul Eitelman, expects the Fed to raise rates two more times in 2016 – potentially as early as June. While this move would reflect the Fed’s confidence in the strength of the U.S. economy, it could potentially represent a headwind for the U.S. equity market compared to other regional stock markets.

Across the globe, the European Central Bank (ECB) and the Bank of Japan (BoJ) have introduced a negative interest rate policy. The goal: to help shift the economy out of neutral and into growth mode. The policy encourages banks to lend and businesses to spend, which hopefully increases the value of the stock market and potentially increases inflation expectations, which both Europe and Japan have struggled with over the last year.

A comparison of U.S., Euro area and Japanese economies and markets 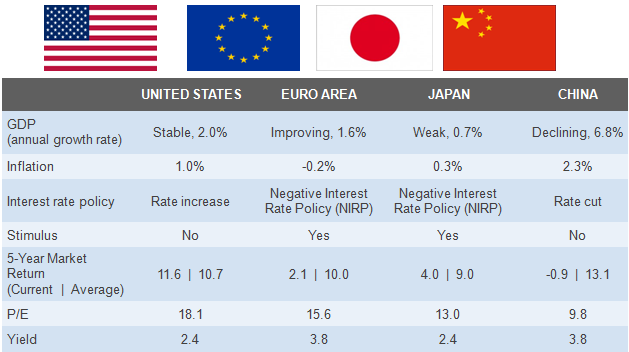 As of March 31, 2016 Sources: Sources: U.S. – Trading Economics, U.S. Bureau of Economic Analysis, U.S. Bureau of Labor Statistics. Euro Area – Eurostat. Japan – Japan Ministry of Internal Affairs and Communications. Market returns: U.S. – S&P 500® Index, Europe – MSCI Europe Index, Japan – MSCI Japan Index. Indexes are unmanaged and cannot be invested in directly. Returns represent past performance, are not a guarantee of future performance, and are not indicative of any specific investment. Forecasting represents predictions of market prices and/or volume patterns utilizing varying analytical data. It is not representative of a projection of the stock market, or of any specific investment.

From a valuation perspective, Europe and Japan currently look attractive relative to the U.S. What might be most interesting is the recent 5-year performance relative to each market’s historical average 5-year return. The U.S. is the only market whose recent 5-year return is above its average 5-year return. For those investors who believe in mean reversion – the tendency for a stock’s price to revert to its average price over time – the data in the table suggests that the U.S. is unattractive while Europe and Japan are attractive.

For example, European stocks returned 2.1% during the most recent 5-year period, which included the debt crisis and double-dip recession. That market showing was paltry compared to its historical average 5-year return of 10%. If the European market reverts to “normal,” we would expect to see a higher return. Europe also currently boasts a higher dividend yield on stocks and fair valuations (based on a price-to-earnings measurement). The old adage “buy low, sell high” comes to mind when we see this data on price and returns.

Being a global investor isn’t always easy. It requires patience and persistence. But, there are a number of reasons why we at Russell Investments think opportunity in the coming year is likely to be greatest outside the U.S.