2014 capital gains: As bad as advertised

I have been writing and speaking with clients about the tax implications of capital gain distributions for a long while – especially because capital gain distributions have been on the rise in the last few years, in turn increasing investors’ tax liabilities. With year-end statements and 1099-DIV forms arriving in investor mailboxes, your clients may also be taking notice. Indeed, this topic is relevant for taxable investors – who collectively represented $6.6 trillion in investments in 2013.1 This represents just under one half of the total $15 trillion investing in mutual funds in the U.S. But this issue (and those assets!) also represents a potential opportunity for advisors.2 So, what were capital gains distributions like in 2014 and what might be worth paying attention to in 2015?

As the chart below shows, in 2014, the average U.S. equity large cap mutual fund distributed $2.31 per share of capital gains – which is the highest distribution since 2007. 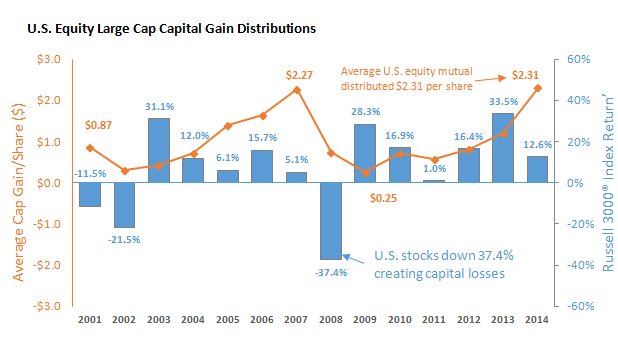 It’s not only the amount of the distribution, but also the sheer number of funds are that are impacted. Consider that last year, 84% of U.S. equity mutual funds (both active and passive funds) made a capital gain distribution, and one fourth of those distributions were greater than 13% of their investment value. Of course, for taxable investors there’s some irony to the current capital gain distribution situation: the market downturn in 2008 was painful for many – but it created capital losses, which have served as an offset to most capital gains over the subsequent years, thereby helping reduce investors’ tax liabilities. However, with 2014 marking the sixth consecutive year of positive equity markets – which in many ways is cause for celebration for investors – most of the capital loss carryforwards generated from 2008’s losses have been used up. That’s why we see capital gain distributions on the rise.

What’s worse is that a substantial amount of capital gains distributions in 2014 were characterized as short-term in nature. As the table below shows, 15.7% of the average capital gain distributions across all U.S. equity mutual funds (both active and passive) were Short-Term Capital Gains, which are taxed at the highest marginal rate for many taxpayers.

Barring a material equity market pullback in 2015 (which Russell’s global strategist team is not currently anticipating), the low capital gain distribution – and accompany tax liabilities – environment is likely over for investors. In fact, the U.S. equity market may not have to move up or down much this calendar year to increase the size of distributions among some funds. In that sense, 2015 could be a repeat of 2007: a year in which U.S. equity markets (represented by Russell 3000® Index) returned only 5.1%, marking their lowest performance since 2003, capital gains distributions were nevertheless high relative to previous years because many mutual funds had used up the capital loss carryforwards they had accumulated in the 2001-2002 market downturn.   It’s a pattern we’ve seen before and may well repeat in 2015.

Investment decisions should not be driven solely by considerations of their potential tax impact. Instead, investors should aim for higher after-tax wealth. But one way to help improve after-tax wealth is to be aware of the tax drag and the tax impact of investment decisions. Working with investment approaches that are designed to reduce the impact of taxes and focus on after-tax returns can help improve an investor’s odds of reaching their goals.