In speaking with investors, I’m frequently surprised by the divergence between their perception of stock market returns and the actual returns markets are posting. In my experience, the difference often lies in the fact that many investors are basing their feelings about the market on what they’re hearing and seeing in the news headlines. Like most years, 2014 had no shortage of sensational storylines that could make the average investor justifiably nervous. Think Crimea, Ebola, ISIS, Malaysia Airlines crashes, for instance. In actual fact, though, 2014 was not only a year of positive U.S. stock market returns (as measured by the S&P 500® Index) – it was the sixth consecutive year of positive calendar-year returns.  A few statistics and the exhibit below may help bolster their confidence: 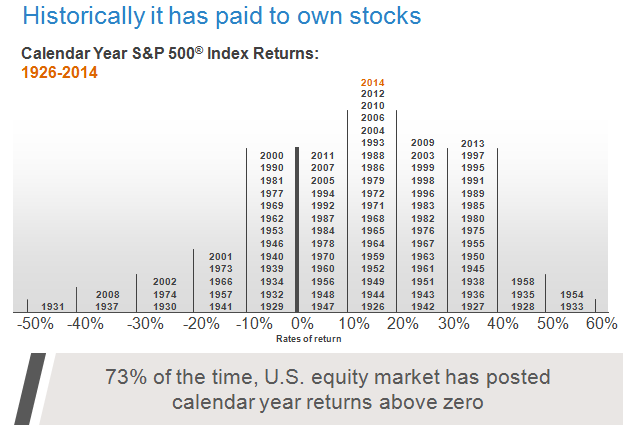 Represented by the S&P 500® Index from 1926-2014 Index returns represent past performance, are not a guarantee of future performance, and are not indicative of any specific investment. Indexes are unmanaged and cannot be invested in directly. Going beyond the average But focusing simply on the average return for the year masks what was going on below the surface – in the economy and the individual equity market sectors and styles. What were some of the key drivers of the 2014 11.56% calendar-year return? (measured by the Russell 3000® Index) The economic backdrop – and the market expectations it shaped Heading into 2014, many market observers anticipated that the U.S. economy would continue on its path of recovery with the unemployment rate to continue improve, inflation to remain low and the U.S. energy sector to continue its strength of the prior year. These drivers also led many to believe that interest rates would rise during the year and cyclical or pro-growth equity sectors to be among the top performing. What actually happened during the year? Most of the expectations were realized except for two big ones:  the path of interest rates and the energy sector. One of the most surprising elements of U.S. equity markets in 2014 was the degree to which the leadership at the stock level was narrow. 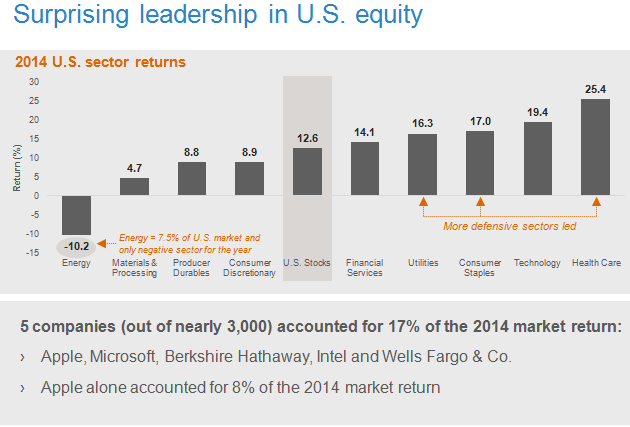 Source: Russell Investments, U.S. Equity: Russell 3000® and Russell 3000® equity sectors. Five stocks everyone would have wanted to own… In 2014, five companies – Apple, Microsoft, Berkshire Hathaway, Intel and Wells Fargo & Co. accounted for 17% of the calendar-year return of the Russell 3000 Index – which is made up of 3,000 companies. Apple alone accounted for 8% of the total return.  Five out of three thousand is pretty narrow leadership.  If a U.S. equity portfolio did not include those companies at least the same weight as the Russell 3000 Index, the portfolio likely would have had a tough time outpacing the benchmark. …and the five everyone would have liked to avoid Amazon, Exxon Mobil Corp., IBM, General Electric and Chevron were the largest detractors within the Russell 3000 Index in 2014. Notice that the names of three of the five largest detractors end with “on.” Which makes 2014 the year in which “ons" were “off.”

It can be easy to let news headlines be our guides for where markets are at. With 2014 now in the rearview mirror, we can plainly see that U.S. equity market returns were better for the year than sensational headlines may have suggested. As you review last year with your clients, remind them of what the equity market was able to overcome – for the sixth consecutive year.