With only a few weeks left in 2015, are you prepared for the possible tax impact coming from mutual funds? My colleague, Cory Christiana, recently said that 2015 has the potential to be the year that capital gain distributions add insult to injury for many shareholders. How is this possible? Consider that through October of this year, the Russell 2000® Index was down -2.5% and the Russell 3000® Index was up 2.0%. These returns, combined with anticipated capital gain distributions for many mutual funds, mean that many investors may have underwhelming investment returns and taxes coming out of their mutual fund investments. I’m with Cory on this one: that’s adding insult to injury. 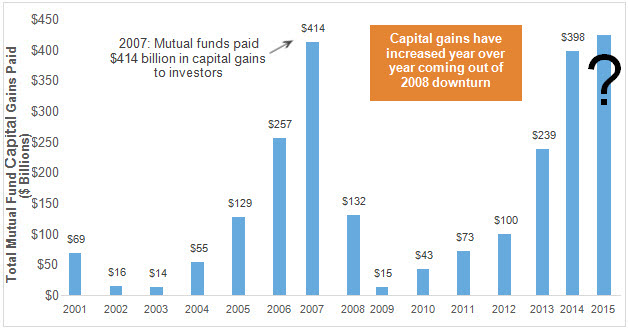 Source: 2015 Investment Company Institute Factbook Recall that U.S. equity markets were negative in 2001 and 2002 (Russell 3000® Index down -11.56% and -21.5%, respectively). From the exhibit above, you can see how this contributed to low capital gain distributions of just $16 billion in 2002. Against a backdrop of strong U.S. equity markets between 2003 and 2007 (average annualized return of 13.6% for the Russell 3000® Index), the level of capital gain distributions increased, reaching an eye-popping $414 billion in 2007. What’s interesting is that distributions peaked in 2007, even though U.S. equity market returns in 2007 were lower than they had been in any calendar year since 2003.1 The landscape in 2015 looks eerily similar.

With U.S. equity markets having experienced strong gains over the past six years2, there is reason to believe that capital gain distributions in 2015 could be in-line with, or worse than, those in  2014. Last year, 84% of U.S. equity mutual funds (both active and passive funds) made a capital gain distribution3, and one fourth of those distributions were greater than 13% of their investment value. This year, investors may not have the benefit of markets being up as much as they were 2014.

To illustrate, let’s look at a hypothetical small cap fund. Assume you invested $100,000 at the beginning of 2015 and the fund moved in line with Russell 2000 Index, which was down -2.5% through October 31st. Let’s assume the 2015 capital gain distribution is in line with average small cap fund distributions witnessed in 2014 = 8.9% distribution of the Net Asset Value (NAV) with a 85/15 split between long term capital gains and short term capital gains. We will assume this taxpayer is in the top marginal tax bracket with Long Term Capital Gains taxed at 23.8% (20% + 3.8% for Net Investment Income Tax) and Short Term Capital Gains at 43.4% (39.6% + 3.8% for Net Investment Income Tax). The tax calculation looks like:

In the example above, you see that instead of an investment return of -2.5%, the hypothetical investment was actually down -4.8% after paying the tax. Again, insult to injury.

So, what do you consider for clients?

Of course, as an advisor you can’t influence whether the distributions will be characterized as long-term or short-term, and for assets held in taxable accounts, the tax on appreciating assets will be due at some point. But depending on your client’s individual situation, the investment process may be able to defer the gain recognition until a later date, which can have a powerful impact on compounding over time. Also, you can be aware of the estimated capital gains for the year that most fund companies publish this time of year. Understand how these distributions add up and compare. Take the time to understand the investment process that generated the after-tax return and taxable distributions. For instance, is the investment process explicitly designed to manage taxes? Does your process include a focus on tax loss harvesting, minimizing wash sales, managing holding period, managing the fund’s yield – all of which may help reduce taxes over time. Typically, these strategies are available only in investment vehicles that are explicitly stated as being “tax-managed” or “tax-aware.”  If a fund caters to both taxable and non-taxable (e.g., 401k or IRA) shareholders, the portfolio manager will be indifferent to taxes. By being explicitly tax-aware, the portfolio manager has a broader tool kit to help manage the pinch of taxes.

For those investments that might have taxable distributions and underwhelming investment returns, do yourself – and your clients – a favor by helping to manage the insult that potential high capital gains distributions may add to the potential injury of modest market returns in 2015. Make a point of talking to your clients about the impact of potential capital gain taxes well in advance of their tax bill arriving.

3 Source: Morningstar and Russell Investments calculations. Includes all open ended U.S.equity mutual funds to include all both active and passive funds. Includes all share classes.