2016 was quite a ride for investors 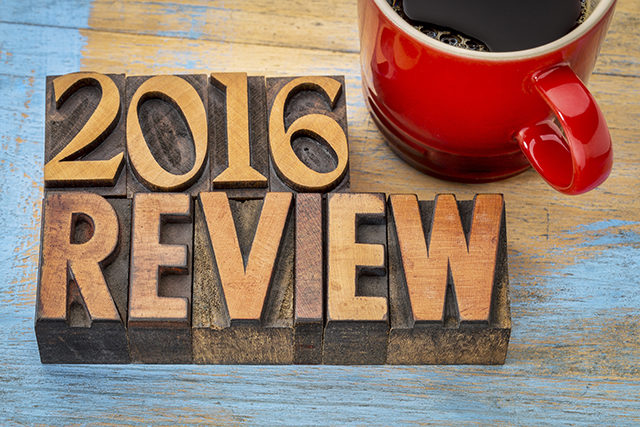 Capital markets treated investors pretty well in 2016. A hypothetical balanced index portfolio returned 7.7% for the year, exceeding expectations of many “experts” going into the year. Given concerns about global growth and historically low interest rates, it was not unusual to see projections for a diversified portfolio producing low single digits or even flat returns for the year. Returns of 7% to 8% turned out to be a pleasant reward. Hypothetical balanced portfolios were driven by the asset class returns displayed in the exhibit below. At first blush, it appeared to be a fairly benign year, with all major asset classes posting a positive return for 2016. However, those who paid attention know that the ride actually resembled a roller coaster more than a carousel.

Difficult start to year Almost all equity markets and diversifiers such as REITs, infrastructure and commodities took hits in the first six weeks of the year due to global growth concerns, falling energy prices and geopolitical issues. U.S. small cap stocks, in particular, had a tough start to the year. They posted one of their worst January returns on record (-8.8%) and continued their downward trajectory through mid-February when they hit a -15% year-to-date return. Investment grade fixed income (Bloomberg U.S. Aggregate Bond Index) was the lone bright spot as a flight to quality pushed government interest rates lower and boosted bond prices. Come mid-February, sentiment toward the global economy began to improve, as did energy prices, and risk assets started to rebound. After an initial February “pop,” stocks gradually worked themselves back towards start of year prices by summer. Some markets, such as emerging market stocks, came back even faster and were soon leading global market results. Brexit vote The surprise Brexit vote of July caused markets to retreat and give back some of their recent gains. The uncertainty around the impact of the U.K. voting to leave the European Union spooked investors. Another flight to quality occurred as interest rates were pushed to lows for the year, bonds soared and equities dropped. International developed and emerging markets were hit the hardest, but all equity markets fell. However, market participants proved resilient and soon seemed less concerned over the Brexit fall-out and stocks began recovering across the board. Fall elections Heading into the fall political elections, status quo was the expected outcome. As the actual elections approached (in particular, the November 8 U.S. presidential election, to a lesser extent the Italian Referendum the first week of December) the status quo appeared to be less of a lock. Markets got nervous as a Trump presidential administration was seen as a wild card, and markets tend to dislike uncertainty. Stock markets paused and pulled back going into the election. When Trump won, futures markets reacted harshly negative before the U.S. market opened, but it has been all positive since. U.S. stocks rallied through the end of the year, as did non-U.S. stocks in Europe and Asia. This wasn’t as apparent to U.S. investors as a strong U.S. dollar rally muted the return that they received. The one area that did not benefit from the November elections was the bond market. Increased speculation about improving economic conditions, inflation, and rising rates caused the bond market to give back much of its 2016 gains. The fourth quarter return of the Bloomberg U.S. Aggregate Bond Index was its worst return since the third quarter of 1981. The Bond Index was up over 6% in mid-July, but limped home to finish the year at 2.6%.

Investors who started 2016 expecting modest portfolio returns should be pleasantly surprised by the actual calendar-year results. The first six weeks of the year – among the worst in history – had many concerned investors flashing back to difficult times of the past. Markets corrected soon, but not without having to contend with geopolitical landmines such as high profile votes that ended up going against expectations. Contrary to many pundits’ expectations, markets took each unexpected electoral outcome in stride. While it may have been tempting to anticipate or react to these events through portfolio moves, the possibility of getting whip sawed was high: Diversified and disciplined investors seemed to come out pretty well on the other end.