Human beings like simple relationships: Complexity distracts from the message. But sometimes oversimplifying a message can be risky. Take the field of health and diet, which I would argue is guilty of taking complex topics and presenting oversimplified heuristics as fact. For example, foods labeled as “natural” or “organic” are perceived to be healthier and safer – even though those words are meaningless unless they carry the official “USDA organic” seal. But many consumers are not aware of this nuance – and even fewer actually understand what it means for a food or product to truly qualify as “USDA organic.” It has simply become one of those branding buzzwords that sounds good and attracts demand, enabling producers to command higher prices – which in turn compels more companies to move into the crowded “organic” space, making it more difficult for consumers to distinguish the good from the bad. I’m concerned that something similar may be happening in the investment industry. “Low-volatility” – a branding buzzword in today’s markets? A confluence of events has made the phrase “low-volatility” synonymous with “safety” in the minds of many investors. In many ways, the perception doesn’t come out of the blue. After all: So, what’s the big deal? The big deal is: Because of the strong run up in prices of low-volatility stocks since 2014, they have become relatively expensive compared to the earnings they are expected to provide. For instance, as of October 31, 2016, the S&P 500 Low Volatility Index had a projected P/E ratio of 18.77 compared to a value of 16.71 for the core S&P 500 Index. The projected P/E is the ratio of current price to expected future earnings. Based on the principle of mean-reversion, this could end badly for low-volatility stocks compared to other, lower-valuation stocks, all else equal. Furthermore, an analysis of Russell Investments’ internal factor portfolios shows that on October 31, 2016 the valuation of low volatility stocks in the United States was 1 standard deviation more expensive than historically when comparing its earnings to price ratio to the S&P 500 Index. 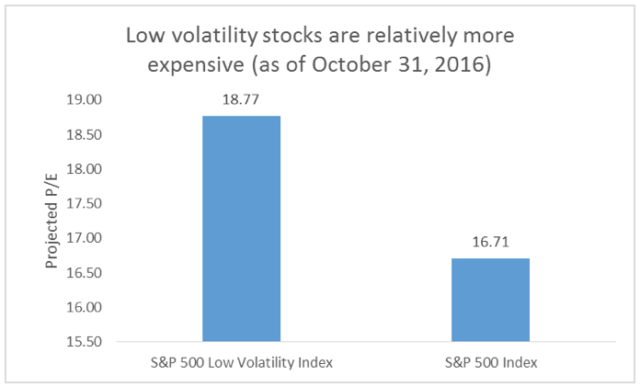 Indexes and/or benchmarks are unmanaged and cannot be invested in directly. Returns represent past performance, are not a guarantee of future performance, and are not indicative of any specific investment.

2. Many investors equate “low-volatility” with “protection from losing money”

When investors think of the word “low risk,” they typically equate it with “protection from losing money.” While it is true that low-volatility stocks have historically tended to hold up better in a market correction than high-volatility stocks, it is not necessarily true that low-volatility stocks are a better “protection from losing money,” especially when the next two points below are taken into account. Low volatility stocks may look attractive based on the convenient brand and perceived protection from loss, but they are not immune to market downturns. In the past three months ending October 2016, the S&P 500 Low Volatility Index not only lost money, but declined more than the core S&P 500 Index. A similar dynamic has also held true over a longer time period: The S&P 500 Low Volatility Index produced a negative monthly return in 15 of the last 36 months. In contrast, the core index was negative in only 13 of the last 36 months. In months when the core S&P 500 Index was negative, the low-volatility version of the index was more negative 15% of the time. Total one-month return (unless otherwise indicated), in percent

Given their recent strong returns, low-volatility stocks have become nearly indistinguishable from momentum stocks (securities that have performed well recently). As both investors seeking low-volatility investments for their traditional low-volatility merits and shorter-term investors following a classic momentum trading strategy (buying those investments whose recent performance has been strong) pile into the low-volatility trade, it risks getting crowded, which means less benefit for true low volatility investors. Indeed, as of November 8, 2016, there were 44 ETFs tagged as “low volatility” with nearly $40 billion in assets, according to ETFdb.com. The largest low-volatility ETF, iShares Edge MSCI Min Vol USA ETF (USMV), held approximately $13 billion in AUM as of November 8th, 2016. Since the beginning of 2015, it has seen net flows of $8.7 billion. Compare that to SPY, the largest ETF tracking the S&P 500 Index, which has experienced net flows of -$28.5 billion over the same period of time ($196.5 billion total). In the end, investors attracted to genuine low-volatility stocks may unwittingly be exposing themselves to a decidedly high-volatility experience when the tide turns – which can happen very suddenly with momentum trades. There is some evidence that the tide is already turning, with less stellar results from low volatility stocks in recent months. Since October of 2016, USMV has shed -$1 billion while SPY lost only -$556 million as of November 8, 2016.

“Low-volatility” might currently be the investment world’s equivalent of the “USDA organic” label and its numerous less-official derivations – a seal of approval perceived by consumers as conveying a greater degree of health and safety than products that don’t bear the special label. The risk for investors is that not all low-volatility investments are created equal, especially at a time when valuations in that segment of the market are comparatively stretched and many providers are flocking to meet consumer demand in that space. Help your clients avoid the low-volatility wolf in sheep’s clothing by thoroughly vetting the quality of an investment opportunity that touts itself as being low-volatility and consider using downside risk and valuation ratios as additional measures of “safety.”