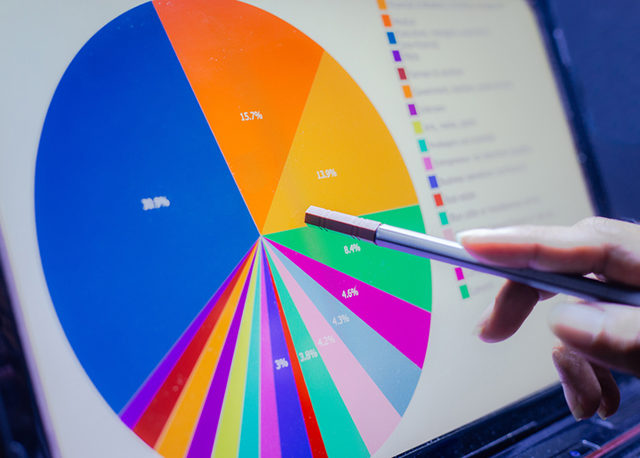 The long anticipated rising interest rate environment may finally have arrived. Since the U.S. presidential election on November 8, the yield on the 10-Year U.S. Treasury Bond has risen from 1.86% to 2.39% on November 30. Anticipation of economic stimulus by the new administration appears to have driven much of that increase. But, new presidential policy is not the only catalyst for higher rates. After the 10-year U.S. Treasury yield hit a generational low post-Brexit, U.S. interest rates have progressively increased as the economy has continued to expand. The combination of growth and additional economic stimulus appear like the ingredients to make a higher rate environment come to fruition. Although the finer nuances of fixed income investing elude most investors, they do grasp the basic concept of “when interest rates go up, bond prices go down.” This has many investors asking about their fixed income portfolio. After all, “If bond returns will be negative, why hold something that is going to lose money?” Seems like a legitimate question. But actually: bond prices haven’t always gone down when interest rates have gone up. 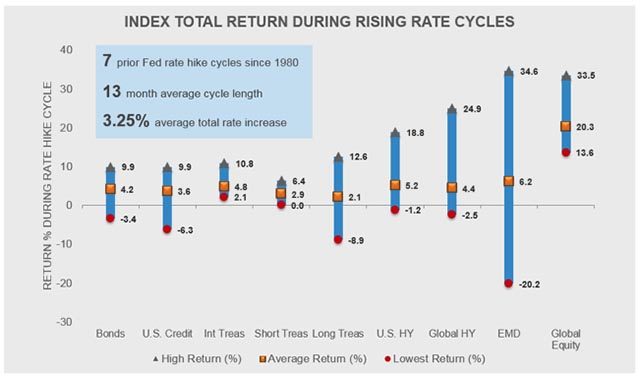 Bonds: Bloomberg U.S. Aggregate Bond Index; U.S. Credit: Bloomberg U.S. Credit Index; Intermediate Treasury: Bloomberg Intermediate Treasury Index; Short Treasury: Bloomberg Short Treasury Index; Long Treasury: Bloomberg Long Treasury Index; U.S. HY: Bloomberg U.S. High Yield Index; Global HY: BofA Merrill Lynch Global High Yield Index; EMD: JP Morgan Emerging Markets Debt Index; Global Equity: MSCI World Index. Index returns represent past performance, are not a guarantee of future performance, and are not indicative of any specific investment. Indexes are unmanaged and cannot be invested in directly. Dates of past 7 Federal Reserve interest rate hike periods: July 1980 – June 1981; February 1983 – August 1984; October 1986 – October 1987; March 1988 – March 1989; December 1993 – April 1995; May 1999 – June 2000; May 2004 – July 2006. Indeed, as shown in the chart above, in the past seven Federal Reserve interest rate hike cycles, average bond returns have been positive – not negative. Of course, the returns were lower than long-term historical averages and there were some significant downturns, with emerging markets debt (EMD) suffering the most, but otherwise most segments of the fixed income market had modest positive average returns, in the single digit range. In addition, global equity returns outpaced their historical norms during these rising interest rate periods, as the chart reflects. This shouldn’t come as a complete surprise, given that interest rates generally increase during positive economic periods and these environments tend to translate into positive equity market returns. Of course, these historical results do not guarantee a positive return ahead for bonds – but, by the same token, they demonstrate that a negative return is not a certainty either. Considering that the Bloomberg U.S. Aggregate Bond Index is down -3.1% since the start of October (thru November 30, 2016), much of the near-term damage in bonds may already be behind us. Additional considerations for those questioning the role of bonds in the portfolio:

It appears that the long-anticipated rising rate environment may be upon us. Many investors are conditioned to assume that rising interest rates spell trouble for bonds. It’s true: there is an opposite relationship between interest rates and the price of bonds. However, rising rates don’t guarantee that bond returns will be negative in these environments. Reviewing past periods of rising interest rates reveals that bond returns were muted on average, but not negative. Considering that the bond market has already retreated just over 3% since the start of October through November 30, it’s possible that forward-looking bond expectations may be muted, but not necessarily negative. While this may not thrill bond holders, bonds are likely to help cushion their portfolio from the impact of potential volatility in equity markets.