How are advisors adapting to regulatory pressures in 2016?

In the Financial Professional Outlook (FPO) survey being released next week, we investigated how advisors are adapting their practice in light of the proposed Department of Labor (DOL) Fiduciary Standard rule. The question we asked was simple: “To what degree do you see the DOL proposal impacting your business if it passes?” Surprisingly, the largest percentage of surveyed advisors (35%) said they anticipated only a slight impact from the proposed rule, and nearly half (49%) said they were not planning to make any changes until after the rule is passed (which could be as soon as April). 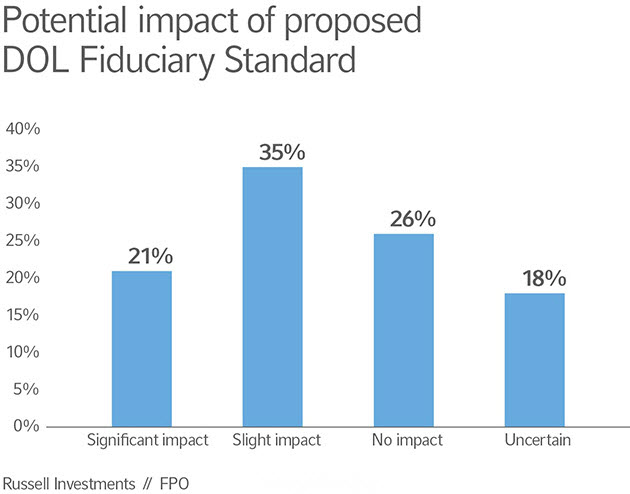 Indeed, the actions advisors were considering during the early days of 2016 (before the proposed rule was finalized), may have been driven by a combination of factors, including: Either way, advisors’ reaction came as a surprise to us, and we had to ask ourselves: Could advisors be in a blind spot when it comes to potential impacts of the proposed DOL rule. We further investigated this question and asked advisors what they were doing to prepare their business in an effort to adapt to the proposal. 20% of survey respondents said they are re-evaluating their core investment proposition strategies and financial products, followed by 18% who are re-evaluating their investment solutions – while only 13% are redesigning their service model. 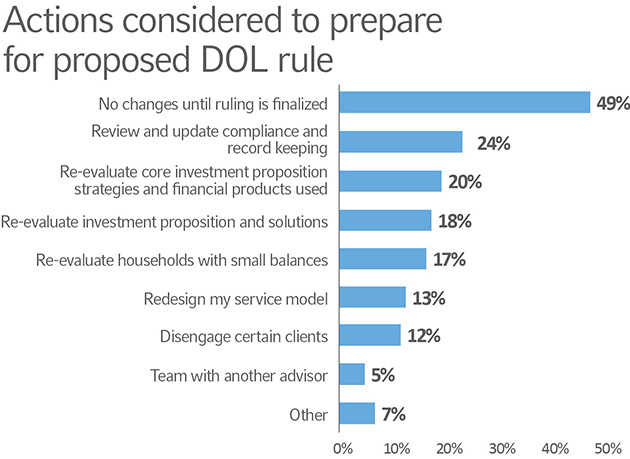 We believe the DOL proposal has the potential to significantly impact financial advisors and affect all aspects of their business operations. We also believe that advisors who embrace the changes necessary as a result of the final DOL proposal have the potential to be among the most successful in a post-DOL rule world.   To most effectively prepare and adapt to the proposal, we suggest advisors consider focusing on four pillars that may help them create healthy, profitable and sustainable businesses: Successfully managing these four pillars in their businesses not only helps advisors go on the ‘defense’ with the DOL proposal, but also on the ‘offense’ by helping them be in a position to deliver lasting, high-quality client relationships – the holy grail of advisor success. A vital asset to our Practice Management program, Russell Investments has advocated that advisors implement strategies which align with these four pillars for more than 18 years.

The proposed DOL rule has the potential to create some major shifts in the advisory landscape. Avoid being caught off-guard when the proposed rule is passed and takes effect. Do what you can now to position yourself for success in the future.