Are your clients wondering if it’s too late to invest?

We know that investors can often be prone to making moves in the markets at the wrong time. Advisors know this, too. Market-timing rarely turns out well for investors of all shapes, sizes and skill-levels. So when we began hearing from advisors that some clients saw the sustained rise in the equity markets as a reason to head for the exits, we wrote about it in the most recent issue of Consider this. I asked some of our blog readers how many times they thought the stock market had made a new daily high over the last 20 years. I have to admit that I was surprised by the answer. You can’t tell by the chart below because there are so many orange dots that they morph into blobs, but there were 486 new market highs made during that time. It’s pretty impressive, isn’t it? 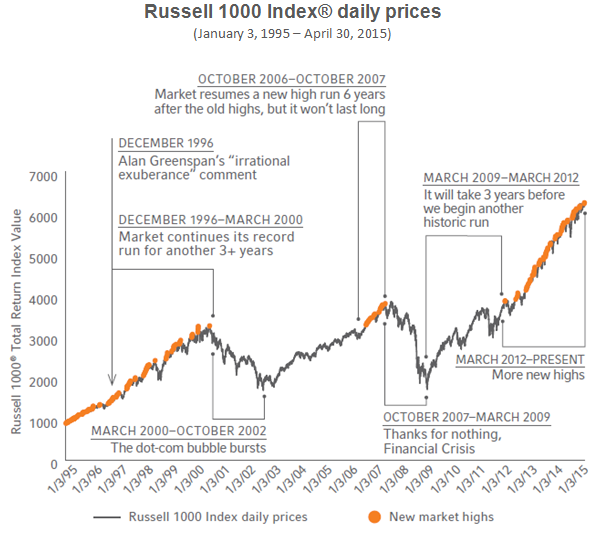 Indexes are unmanaged and are provided for general comparison purposes only. They cannot be invested in directly. Returns represent past performance, and are not a guarantee of future performance, and are not indicative of any specific investment. The first orange dots to the far left form the 5-year stretch leading up to the dot-com bubble. It was very early on in that run (December 1996) when Alan Greenspan, then chairman of the Federal Reserve, used the term “irrational exuberance” when hypothetically asking how we would know when the markets ran too far.1 We know the answer now by simply looking at the chart, but back then the market continued its record run for a few more years before pulling back nearly 43% over 25 months. From there the market reversed course, hitting more new highs throughout 2007. By 2008, the financial crisis took hold, dragging the Russell 1000® Index down to new lows not seen since early 1997. The market bottomed in March 2009 and it’s been essentially a long series of orange dots—and market highs—since then.

If you’re fielding questions from apprehensive clients who are worried about a market reversal or think it’s too late to invest, tell them about Alan Greenspan. He wasn’t very good at timing the markets. So if the nation’s top economist can’t get it right, what does it say for the rest of us? It probably says we should have an investment plan and a well diversified portfolio we are comfortable with. Then we should turn off the television for the rest of the summer. That’s what I’m going to do.
1 Yellen Expects Fed to Start Raising Rates This Year The Russell 1000 Index measures the performance of the large-cap segment of the U.S. equity universe. It is a subset of the Russell 3000® Index and includes approximately 1000 of the largest securities based on a combination of their market cap and current index membership. The Russell 1000 represents approximately 92% of the U.S. market. Indexes are unmanaged and cannot be invested in directly. Returns represent past performance, are not a guarantee of future performance, and are not indicative of any specific investment.