The art of interactive storytelling

I have a confession: My two-year-old son uses the iPad. Before you judge, let me explain. He uses a few of the many interactive educational apps to learn about shapes, animals and colors. Recently though, I noticed something interesting during our bedtime stories with real, physical books. Very often, he tries to swipe or press on the objects on the page! While your clients won’t mistake paper for an interactive screen, many are familiar with and delighted by the digital interactivity that is increasingly a part of our lives. And using interactive technology can be a great way to create engaging conversations.

Using technology to turn a lesson into a story

Think about it this way: you are talking to your clients every day, educating them about what’s going on in their portfolio or about an investment concept. And, as you know, conversations don’t always follow a linear path. They can be messy, jumping forward and back, racing through questions and lingering on concerns. In these conversations, you probably supplement your words with a visual aid that helps turn on the proverbial light bulb. Now imagine if that visual aid really came to life and was nimble enough to follow the path of your conversation and tell a story? How much more meaningful could your conversations be? If you are an advisor who finds value in using charts, graphs and other visuals to communicate an idea, I challenge you to use interactive apps and tools. There are many stories for which interactivity can be beneficial, but let’s just focus on one such example. You may be familiar with the concept of a “quilt chart” or a chart showing performance of different asset classes over a period of time.  These charts are often presented in PowerPoint slides or PDFs, but this is an example of content that comes alive with interactivity. This is actually one of the features Russell decided to make available to advisors who sell Russell's products through our own mobile app, Interact. We call this feature “The Value of Global Diversification.” The value of global diversification 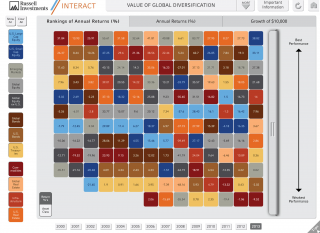 “The Value of Global Diversification” represents one feature of Interact, Russell’s iPad app. Interact is available only to advisors whose firm has a selling agreement with Russell and an account on Russell’s advisor website, RussellLINK. Picture yourself walking a client through an interactive tool like this to help them understand the potential benefits of global diversification, and consider this hpoythetical example of using the tool. Tap "Clear All" and then "2012"  As seen in the image below, tap “Clear All” and then “2012” as you say, “Imagine that it’s the end of 2012. You are frustrated that some asset classes have dragged down your diversified portfolio’s performance and you heard something smart on CNBC or got an investment tip from your brother-in-law. So now you are tempted to invest entirely in just one or two asset classes that have been performing well."

Tap "Show all"  Tap “Show all” as you say, “The truth is, what you hear on TV and your brother-in-law aren’t always correct – and picking the ‘winner’ is really, really hard to do. Although diversification does not assure profit or protect against loss, diversification can take some of the guessing out of investing.”

If you were on the other side of the table, wouldn’t that experience draw you in a bit more than a PowerPoint slide or just a verbal conversation?

Interactivity is compelling and differentiating for many investors. It can lend itself well to many of the stories you already tell and bring your conversations with clients to the next level of engagement. Take the next step to find out about interactive tools available to you, and use them to create memorable client meetings.