Is a bear market looming?

So far 2016 has proven to be an uneven year for investors, with some roller-coaster market swings that left more than a few stomachs churning. So we’ve heard a question from a lot of clients: “Are we headed for a bear market this year?”

We did dip briefly into near bear territory in early February, when the S&P 500® and Dow were down as much as 11%. As I write this, the S&P 500 is actually back into positive territory year to date, and markets have shown some upward momentum.

And here’s the thing: For markets to dive into bear territory (down 20%) and stay there, it’s almost imperative that we tip into recession or depression. Take a look at this chart: 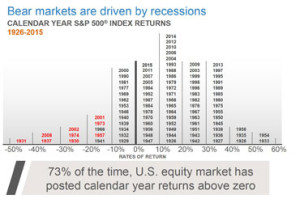 Represented by the S&P 500® Index from 1926-2015.
Index returns represent past performance, are not a guarantee of future performance, and are not indicative of any specific investment. Indexes are unmanaged and cannot be invested in directly.

It shows calendar-year S&P 500 index returns from 1926-2015, and the rates of return. The years with the worst returns – drops of 10% or greater – almost invariably correlate to some kind of financial calamity. The exceptions are 1966, which was just a bad year for stocks, and 1941, the dawn of World War II. The very worst years (1931, 1937, 2008) correlate with the start and middle of the Great Depression, and the recent Great Recession.

So, is a recession imminent? Those who think so could point to how far we are into the current business cycle1 – some seven years. But business cycles don’t run on clocks. They run on fundamentals, such as whether there are significant imbalances in the economy – too much debt, skyrocketing wages, real estate bubbles, and the like. But right now we’re not seeing much of that.

Annual economic growth in the U.S. is currently steady at 2% (as measured by U.S. GDP), which is fine but hardly red-hot. We saw more evidence of that in the March jobs report, which saw a solid gain of 215,000 jobs, while the jobless rate stayed about the same (inching up to 5%) and wage growth was modest.

Moreover, business investment hasn’t been as aggressive as it was in the late 1990s, just before the dot-com bust. And households are in better shape than they were pre-2008, with less debt and somewhat more savings.  Combined, all of these factors suggest to us that the U.S. economy is currently more recession-resistant than perhaps its given credit for by many people.

Now, the caveat to our conclusion is that we do see some early signs of trouble in corporate balance sheets, which are increasing the debt due to the exceedingly low interest rates of recent years. Plus, as American financier Steve Rattner pointed out in a recent New York Times column, economists don’t necessarily have a great track record when it comes to forecasting sharp downturns.

Given the continued uncertainty in China, the Bank of Japan’s difficulties in yanking its economy out of a deflationary spiral and Europe’s mixed record of economic success, there’s plenty in the world that could go wrong.

But let’s say the U.S. stays out of recession for the foreseeable future. What does that mean for equity markets? Probably a lot of what we have seen over the past 18 months – some decent runs, lots of volatility, bouts of anxiety followed by cautious optimism.

Overall, we think the rest of 2016 will be an OK period for equities. Not great, but probably worth an investor’s time to consider sticking around. We expect returns in the low-single digits. Not fantastic, of course. But when cash gets you a half percent return and fixed income between 2 and 3%, it’s something.

In short, while anything can happen, our forecasts don’t see a recession on the near horizon. Even despite further slowing in the global economy, U.S. growth and jobs increases are holding steady, as I noted earlier. Investors who show some caution and look for the right opportunities are likely to be able to navigate these choppy waters well.