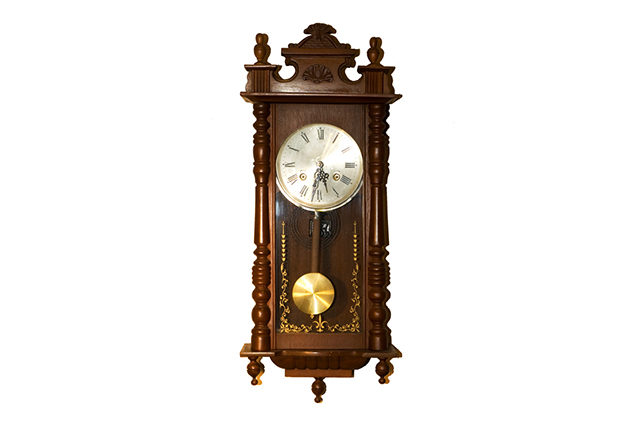 The news headlines celebrating new record highs in the U.S. stock market have multiplied in the last six months.1 While this upward trajectory has been rewarding for many investors, the higher stock prices are accompanied by increasingly stretched valuations and risk of muted future returns—and even potential drawdowns. These are some of the factors currently leading our strategist team to a preference for non-U.S. equity over U.S. equity.

We looked at the cyclically-adjusted price-to-earnings ratio (CAPE2) to measure the valuation of U.S. stocks since 1900. The chart below demonstrates a clear negative relationship between the price-to-earnings ratio and future stock market returns. At the end of March 2017, the CAPE stood at 29, which is among the top 5% of all monthly observations since 1900. The CAPE has only ever been this high two times in the past: in the late 1920s and the late 1990s. Ominous-sounding comparables. Indeed, when the CAPE has hit such elevated levels in the past, the U.S. stock market has returned 4.7% on average in the three following years. More alarming is the historical average drawdown of -21% over the next three years. If history were to repeat itself, the S&P 500® Index would drop -21% from current levels before recovering. 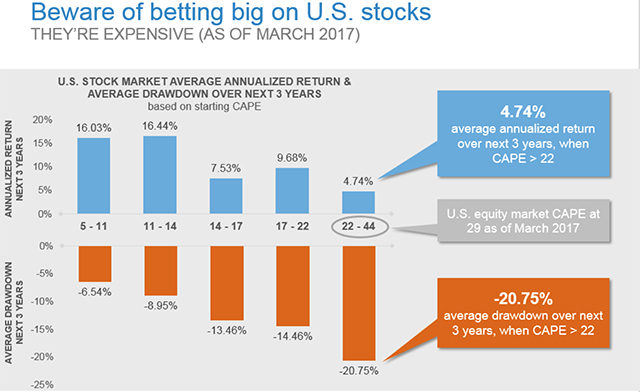 Yale Professor Robert Shiller calculates a Cyclically Adjusted P/E Ratio based on stock price divided by prior 10-year earnings. U.S. stock market is represented by an index created by Professor Shiller. The stocks included are those of large publicly held companies that trade on either of the two largest American stock market exchanges: the New York Stock Exchange and the NASDAQ. Prior to 1926 his data source was Cowles and Associates Common Stocks Index, after 1926 his source has been S&P.
Index returns represent past performance, are not a guarantee of future performance, and are not indicative of any specific investment. Indexes are unmanaged and cannot be invested in directly. Forecasting represents predictions of market prices and/or volume patterns utilizing varying analytical data. It is not representative of a projection of the stock market, or of any specific investment. Average drawdown is the percentage return from period start date to the market trough within the subsequent three years.

History doesn’t repeat itself, but it often rhymes.

That said, an extremely high CAPE doesn’t mean that investors should expect doom and gloom in the markets. In fact, the CAPE has been in the top 20% of all observations since the end of 2014 and the U.S. market hasn’t experienced a significant drawdown in the last two and a half years. Far from it! But, it does serve as a warning. Investing in stocks is inherently risky; we believe that that risk is significantly elevated today.

We can’t tell the future with certainty and few investors can afford to abandon their strategic asset allocation, which typically includes a sizable allocation to U.S. stocks. Valuations are clearly an important input into investment decisions, but investors should be cautious not to over-react to them. That said, investors can help prepare by thoughtfully positioning their portfolios based on current conditions and insight from past periods of similar environments. It can help to think of the CAPE as a pendulum on a grandfather clock that swings back and forth. Over the last three years, stocks (S&P 500 Index) have performed very well, returning nearly 10% annualized as of June 15, 2017. We don’t know with certainty when the pendulum will reach its apex and start to reverse course. But we know that at some point it will happen, and we believe it is likely to happen sooner rather than later. History tells us that a period of lower returns is likely—which may or may not be accompanied by an extreme market correction. As a result, come investors may benefit from pursuing higher confidence investment opportunities to complement their strategic asset allocation and consider reallocating some percentage of the total portfolio to other risky assets with more favorable valuation ratios. Basically, buying low and selling high.

Valuations of U.S. stocks have become very expensive as the equity market has repeatedly hit new highs since the election in November 2016. At Russell Investments, we believe that there is an opportunity to invest in international equity markets, most notably in Europe and in emerging markets countries, where relative valuation ratios are considerably lower. Leaning into opportunities as they present themselves by keeping an eye on valuation ratios like the CAPE is the equivalent of the adage “buy low, sell high.”

2 The Shiller PE ratio is also known as the cyclically adjusted price-to-earnings ratio or CAPE. It compares the current price of the S&P 500 Index to the average earnings of its underlying companies over the last 10 years. Data used in this analysis can be found here: http://www.econ.yale.edu/~shiller/data.htm.