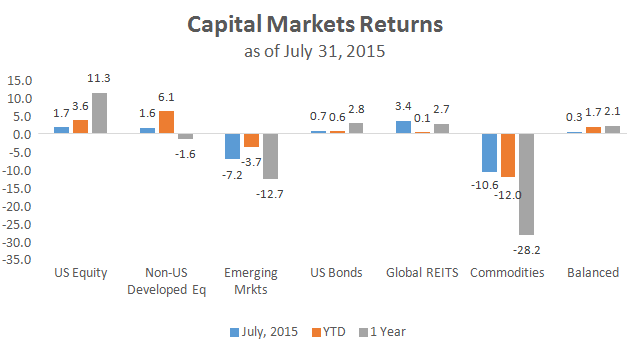 Here are the top three market themes affecting positioning and performance last month from some of our experts, including our CIOs (Chief Investment Officers) across Russell Investments. All data is as of July 31, 2015. For longer-term asset class performance.

Erik Ristuben 1.     Greece still in . . . for now Greece agreed to a new three year bailout agreement, which preserves its status as a member of the common currency (for now). For the region as a whole, this is good news and helps allow investors to refocus on the strong macro fundamentals in Europe. Eurozone equities rallied, up 5.1%1, in local currency terms, on this news. For Greece, the economic damage has already been severe and new elections are likely in the Fall. 2.     Bottom falls out from oil again The proposed Iranian nuclear deal and an uptick in U.S. rig counts led to renewed concerns of excess supply in the oil market. For the month, WTI (West Texas Intermediate) crude oil prices were down 22.5%2. Unease around the Chinese equity market and economy exacerbated declines in other commodity prices. 3.     Economic growth modestly improved After a slow 2015 start, the U.S. economy bounced back in the second quarter posting 2.3% growth in GDP. European GDP numbers were also up in July and contagion from Greece to the broader European economy has been limited. Both eurozone economic activity and business sentiment remained at positive levels in July.3

James Barber 1. Factor performance rewarded large cap growth Global markets focused on earnings and revenue growth but also showed a preference for larger capitalization and defensive companies. Smaller cap, value and commodity producers were out of favor during July.4 2. Sectors with less economic sensitivity outperformed Sectors considered to be “non-cyclical,” such as health care, consumer staples and utilities were the best performers5 as global markets grappled with mixed economic data and fears about a potential hard landing in China. 3. Emerging markets plummeted The return gap between developed markets and emerging markets was unusually wide with developed markets outperforming substantially.6 China and Brazil led emerging markets downward with the impact evident across multiple regions. There were very few places for emerging markets equity managers to hide.