The last time I wrote about tax reform was in February 2014. At the time, then House Ways & Means Committee Chairman, David Camp (R-Michigan), published a tax reform package that attempted to make some of the very tough choices needed to simplify the existing tax code. It was detailed enough to draw criticism from both sides of the aisle. The split nature of the Congress and Presidency at the time meant that Camp’s proposal went nowhere. Fast-forward 2 ½ years and the odds of tax code changes seeing the light of day in 2017 have suddenly increased. Tax cuts were an important part of President-elect Trump’s campaign and his party now controls both the House and the Senate, potentially making passage of a bill easier. Admittedly, the President-elect’s tax proposal is light on specifics and the final bill, once through negotiations, will almost certainly look very different. In fact, even Trump’s Treasury secretary nominee, Steven Mnuchin, has described quite a different tax plan and House Speaker Paul Ryan’s (R-Wisconsin) proposal (“A Better Way”) from June 2016 is still on the table, too. Either way, it doesn’t hurt to be prepared and understand the potential impact to investors of the President-elect’s current proposal. The current proposal’s headline changes include:

At the individual taxpayer level, the Trump proposal has fewer brackets and undoubtedly appears simpler. But this “simplicity” comes with a trade-off: this tax regime would likely produce material reductions in federal revenue, which introduces other challenges. It also could increase taxes for the lowest income earnings, while reducing them for the highest earners. 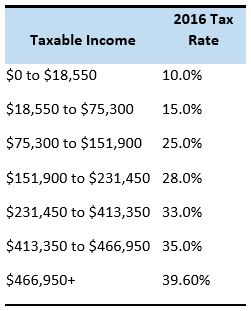 President Elect Trump campaigned on repealing the Affordable Care Act (aka Obamacare) and its related Net Investment Income Tax of 3.8% on certain unearned income. At the same time, though, the current proposal would actually increase the Long Term Capital Gain (LTCG) rate for many taxpayers: The top LTCG rate would remain at 20%, but the top threshold would drop from $466,950 to $225,000 (for MFJ filing status). That means for taxpayers with taxable income between $250,000[1] and $466,949, the LTCG rate would increase by 1.2%, from today’s rate of 18.8% to 20%. Active, tax-aware strategies that that attempt to maximize after-tax investment returns through tax-loss harvesting, attention to holding period length, qualified versus non-qualified dividends, taxable interest income and municipal bond interest income, can help manage that potential increase in taxes due.

Meanwhile, investors with taxable income of at least $466,950 will experience a decline in their LTCG rate, from 23.8% to 20%. From a tax expense perspective, a 20% tax rate is clearly better than one at 23.8% - note the savings in the table below – but it is still not 0%. Investment taxes will continue to be a headwind for investment returns. 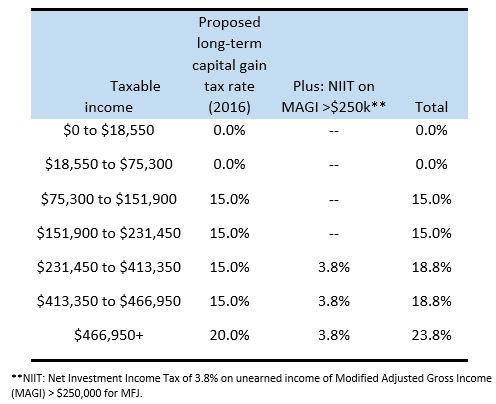 President-elect Trump’s current tax proposal would increase the standard deductions and cap itemized deductions. Deductions are one of the issues on which Trump’s Secretary of Treasury nominee and he differ: Mnuchin stated that any reductions on the top taxpayers would be offset by fewer deductions. That is not the case as currently proposed. You can imagine the lobbying and posturing by impacted parties (e.g., housing industry, mortgage industry, charitable giving – and many more; the list is almost endless). These types of trade-offs are why proposing tax reform is much easier than actually getting it passed. Additionally, estate taxes would be entirely repealed.

To date, President-elect Trump has made no mention of changing the tax-free nature of municipal bond interest. Speaker Ryan’s plan referred to repealing “special-interest carve outs” from the tax code but did not mention any specific detail. It will undoubtedly be up for discussion, but state/local governments and individual investors will no doubt make sure their voice is heard.

Although the details on scope, size and who will be most affected are not quite clear, it is likely that there will be some form of tax cuts in 2017. But for investors, the main take away is: Taxes are not going to 0%. Helping clients retain more of what they earn after tax by considering tax-aware investment strategies will remain an important endeavor.
[1] Note the discrepancy between $225,000 vs. $250,000 is due to the fact that the NIIT only applies to MAGI greater than $250,000.