The Federal Reserve finally increased the Federal Funds Rate for the first time since 2006 and all eyes are now on the hike’s impact to the broader fixed income markets. Given the December rate increase was widely anticipated, much of near-term impact was likely already priced into the markets. The Economic Indicators Dashboard tracks some of the most relevant indicators to pay attention to: yield spread, inflation and unemployment. 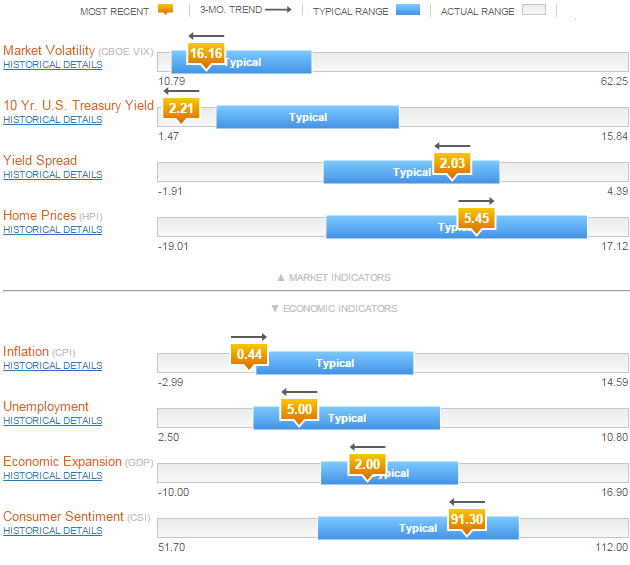 Accessed on December 22, 2015. This dashboard is intended as a tool to set context and perspective when evaluating the current state of the economy. For each indicator, the horizontal bar shows four things.

The yield spread measures the yield difference between the 10-Year U.S. Treasury Note and the 3-Month Treasury Bill. An upward sloping yield curve is generally a sign that the bond market expects continued economic expansion. With  the recent media attention on the Federal Reserve and interest rates, it’s worth noting that the Fed only has a direct impact on the short end of the yield curve which is represented as the Federal Funds Rate (the interest rate paid by high quality financial institutions to borrow and lend money overnight). The Fed hopes to influence the longer end of the curve in different ways. One possible and widely shared belief is that they will make additional rate increases to the Federal Funds Rate in 2016. Other market forces – such as supply and demand – impact rates as well. If the Federal Reserve increases rates in 2016 and other major economies (Europe, Japan, China) continue to keep their interest rates low, the demand for U.S. Treasuries will be something to watch in 2016. Regardless, the U.S. remains the safe-harbor for most of the investment world.

The U.S. Federal Reserve has the dual mandate of maintaining price stability and full employment. Both inflation and unemployment will remain the two key indicators used by the Fed when timing possible future interest rate increases. The Economic Indicators Dashboard tracks the Consumer Price Index which includes the impacts of energy. With the price of oil decreasing 32% in 2015 and 66% from June of 20141 (as of Dec. 14, 2015, U.S Energy Information Administration), cheap energy is contributing to keeping inflation at historical lows. When evaluating inflation numbers in 2016, it is important to make sure you understand if Food & Energy are included or excluded. Again, the CPI includes these categories.

The December employment report came in strong, bringing the unemployment rate to a recent low of 5% – half of what it was at its peak (10%) in October 2009. There are many competing ways to evaluate the employment picture to include the participation ratio, the underemployed, those who have stopped searching for a job, etc. Last month (December 18th), the Bureau of Labor Statistics published the unemployment rates by state. North Dakota still has the lowest rate at 2.7%, but one has to wonder if (or when) the low oil prices will knock them out of the top spot. Which state has the highest unemployment rate? New Mexico, at 6.8%.2

With the Fed Reserve’s decision to raise interest rates in December 2015, the market will likely look for clarity about the timing, frequency and magnitude of future rate increases for 2016. The pace of job creation and inflation will likely be key indicators for investors to watch, weighing heavily on the Fed’s decision to raise rates during the year.
1 Source: U.S. Energy Information Administration - WTI Oil Prices 2 Source: Bureau of Labor Statistics - State Unemployment