With the next Federal Reserve Board meeting fast approaching on Dec. 15 and 16, investors everywhere are monitoring key economic and market indicators in an attempt to anticipate whether the Fed will raise interest rates for the first time since June 2006, or choose to continue to hold rates steady and near zero. The Economic Indicators Dashboard tracks some of the most relevant indicators to pay attention to: inflation and unemployment. 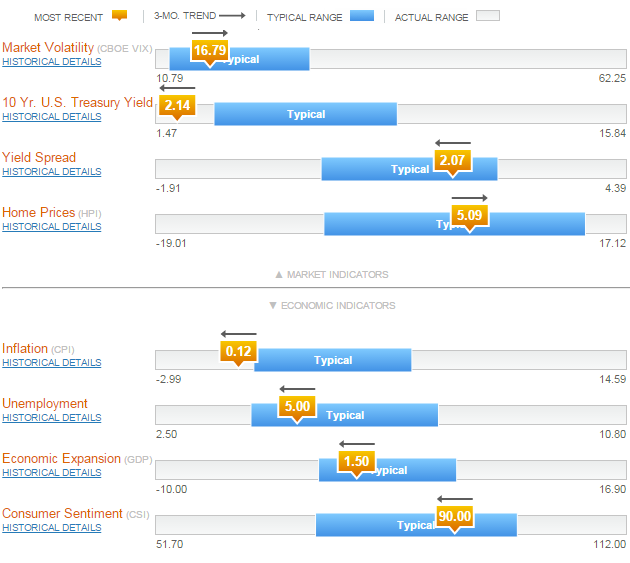 Accessed on November 19, 2015. How do I read this chart? This dashboard is intended as a tool to set context and perspective when evaluating the current state of the economy. For each indicator, the horizontal bar shows four things.

In September, the Fed cited the spike in market volatility as one of the reasons they chose to hold interest rates steady. Market volatility, as measured by the Chicago Board Options Exchange Volatility Index (CBOE VIX), had not reached similar levels since 2011. It has since come down from its September highs and remains within its historical typical range with its three month trend continuing upward. This reading is in line with Russell Investments’ view, encouraging investors to prepare for higher levels of market volatility going forward.

Inflation has persisted below the Fed’s 2% target since the spring of 2012. In December 2014, it dipped below its historical typical range, where it still sits today. The October readings indicate that consumer prices for all items excluding food and energy rose 0.2% year-over-year for the second straight month, bringing inflation to 0.12%. The next inflation reading will be reported on Dec. 15—the first day of the Federal Reserve Board meeting—and will likely be one of the primary data points of consideration.

The October employment report came in strong, bringing the unemployment rate to a new recent low of 5% - half of what it was at its peak (10%) in October 2009. So far this year, the economy has added approximately 2 million new jobs as of Oct. 30, slightly lower than the 2.3 million it added for the full calendar-year 2014. The labor participation rate has remained at 62%, but wage inflation seems to be picking up.

All eyes are on the Fed as we wait to hear its decision on Dec. 16 to raise interest rates. Judging by these three key economic and market indicators, and the Fed’s past comments, we think it seems likely that the Fed will take action sooner than later.