Markets in April 2016 continued to rebound from their February lows after positive economic data helped calm investors’ concerns about the state of the global economy. Despite somewhat disappointing U.S. GDP data for the first quarter of 2016, signs of an improving global economy sent most markets higher for the second month in a row. Seven of the eight major market and economic indicators included in the Economic Indicators Dashboard were within their historical typical ranges by the end of April. The readings for market volatility, yield spreads and economic expansion were notable during the month. 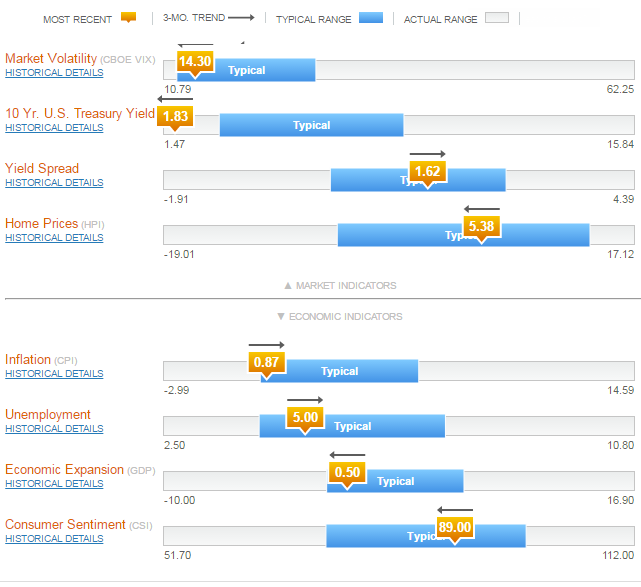 Accessed on May 15, 2016. How do I read this chart? This dashboard is intended as a tool to set context and perspective when evaluating the current state of a sample of asset classes. The ranges of 12 month returns for each asset class are calculated from its underlying monthly index returns. The stated inception date is the first full month of an index's history available for the dashboard calculation. Here is how to read the graphic on this page: FOR EACH INDICATOR, THE HORIZONTAL BAR SHOWS FOUR THINGS A GRAY BAR shows the full range of historical rolling 12-month returns for a sample of asset classes. A BLUE COLOR BAND represents the typical range (one standard deviation away from the mean, i.e. 68% of historical observations) of rolling 12-month returns for these asset classes. AN ORANGE MARKER represents the most recent 12-month return of the asset classes. Market Volatility – Volatility in the markets – as defined by the CBOE Volatility Index – declined again in April and reached its lowest monthly level for 2016. Volatility has been decreasing since mid-February as markets have stabilized and a global recession seems unlikely, thanks at least in part to improving economic data from the Eurozone, an increase in the price of oil and economic stimulus in China. The VIX’s current level of 14.3 is near the bottom of its historical typical range and is back near the lows investors have gotten used to over the last several years. Yield Spread – The spread between the 10-Year U.S. Treasury Note and the 3-Month U.S. Treasury Bill widened for the second month in a row from 1.56% in March to 1.62% in April. Yield spreads generally widen at times when the economy/markets are doing well and are a signal that the markets are anticipating an increase interest rates. After a challenging start to the year because of falling oil prices and concerns surrounding China, the yield spread contracted and many people were left wondering whether the Federal Reserve would raise rates at all in 2016. There is still plenty of uncertainty around when the Federal Reserve will raise rates next, but the recent recovery in the markets and widening yield spread is an encouraging sign for the economy and signals that future rate rises may be more likely. Economic Expansion – U.S. GDP expanded at a rate of 0.5% during the first quarter of 2016, which was the smallest expansion since March 2014 when GDP actually contracted by 0.9%. Although 1Q16 GDP was relatively soft and slightly below the consensus estimate of 0.7%, going forward, we expect spending to pick up and for GDP growth to get back to around 2% during 2016.

After a turbulent start to the year because of global growth concerns, recent positive economic data shows that the global economy may not be as vulnerable as previously thought. Most asset classes have erased the losses from the first six weeks of the year as global recessions concerns have eased and many investors have returned to a “risk on” mentality. The economy continues to appear to be in healthy shape, however it will be watched very closely going forward as the Federal Reserve decides if and when to raise interest rates again.