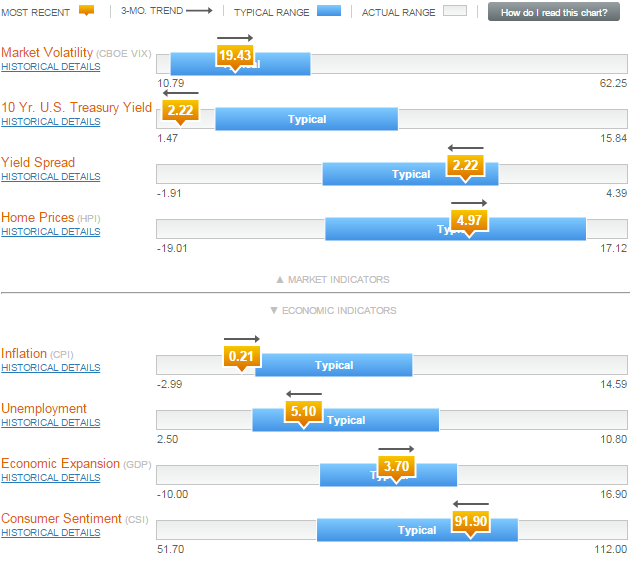 Accessed on September 11, 2015. How do I read this chart? This dashboard is intended as a tool to set context and perspective when evaluating the current state of the economy. For each indicator, the horizontal bar shows four things.

Month-end market volatility (measured by CBOE VIX) rose in August to 19.43%, the highest since mid-2012. High as it may sound, that month-end number is muted compared to the intra-month (and intra-day) volatility, which hit 40.74 on August 24th, a level reminiscent of volatility in August/September 2011. Fortunately, daily volatility through the first days of September has been less extreme. Of course, periods of volatility can be rewarding for long-term investors:  staying invested and enduring the dips can be the best decision.           The August reading of the 10-Year U.S. Treasury Yield remained below the typical historical range at 2.22%. Following the Federal Reserve’s decision to hold rates steady on September 17, all eyes will remain on the Fed for clues about whether they will raise rates before the end of the calendar year or not.

Unemployment continued to decline, reaching 5.1% by the end of August. Although total nonfarm payroll employment rose by 173,000 in August, it fell short of market expectations. The U.S. economy, measured by GDP, expanded at a revised seasonally adjusted annual rate of 3.7% in the second quarter, an improvement on the first estimate of 2.3%. This increase reflected rises in nonresidential fixed investment and private inventory investment.

In our view, the market volatility experienced in August and global political risks – among other factors – will likely cause the Fed to hold off on raising interest rates at their meeting in September.