In contrast with the hustle and bustle of back to school and work, the August reading of the Economic Indicators Dashboard, which is largely positive, serves as a reminder of the mostly lazy days of summer. 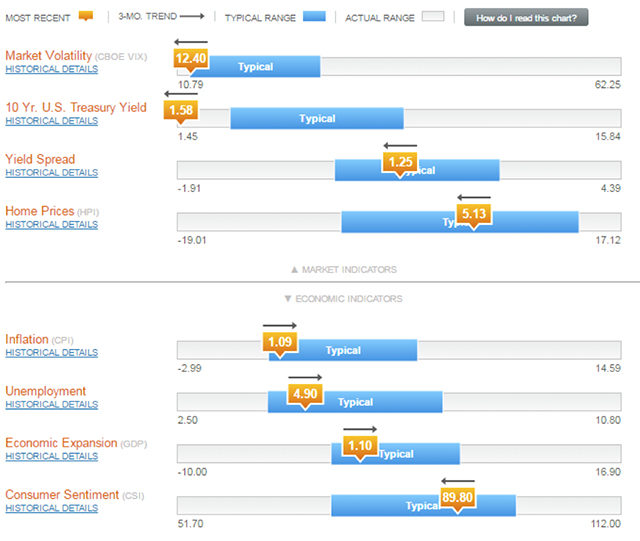 Accessed on Wednesday, September 21, 2016. Market volatility – The recent spike in market volatility (measured by the VIX, aka “fear index”) on Sept. 16 follows a very tepid summer for the index. The unexpected news of the Brexit vote, in which the majority of the citizens of the UK voted to leave the European Union drove the fear index to 26 in June – reflecting investors’ negative sentiment about upcoming short-term market moves. However, it appears that that fear may have been misplaced: after news of Brexit settled in, the VIX dropped back down around 12 and stayed there for the rest of the summer. It wasn’t until Sept. 16, when whispers from the U.S. Federal Reserve indicating that a near-term rate hike was possible, that the VIX climbed back up to over 18. And yet, even at this level, market volatility remains well within its historical typical range. 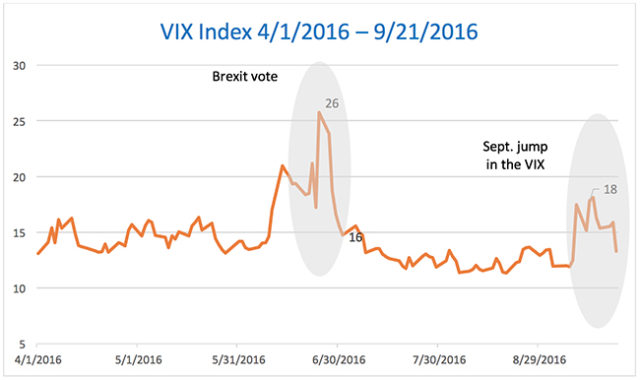 Source: Chicago Board Options Exchange 10 Year U.S. Treasury Yield –  The uncertainty about whether the Fed would decide to raise interest rates at the Sept. 20-21 FOMC meeting and the recent uptick in market volatility starting on Sept. 9th caused a short-term sell off of both stocks and bonds. The 10-year U.S. Treasury yield jumped from 1.5% to 1.75% over that period. Although 17% increase in just a few days might seem like a big adjustment, when viewed against the backdrop of the historic low levels yields are currently at, it’s actually not too farfetched to see such a bounce in yields. At 1.75%, yields have now returned to their pre-Brexit levels and are still lower than they were at the end of 2015 (2.3%) and well below their historical typical range. So while at first blush this may seem like an alarming selloff in the bond market, it is more likely that it is a short-term event based on central bank uncertainty. Unemployment & Inflation – A continued low unemployment rate and rising labor market participation should eventually put increased pressure on wages, which should cause inflation to rise. So far, this chain reaction doesn’t appear to have been ignited. In fact, as of the latest Consumer Price Index data released on Sept. 16, inflation remains low, rising just 0.2% in August. The three-month trend shows inflation going up slightly, but generally hovering around 1%

Overall the U.S. economy appears to be healthy based on the latest reading of the Economic Indicators Dashboard.