For many investors, February was a tale of two halves: stocks1 declined in the first half of the month, only to return close to their starting point again by month-end. This sort of whirlwind seems to be par for the course at the moment as market signals and economic indicators have been sending somewhat conflicting messages to investors so far this year. Let’s take a look at how some of the most important economic and market indicators that are tracked in the Economic Indicators Dashboard fared in February – and what they might foretell for investors in 2016. After all, navigating these seemingly contradictory signals will be one of the keys to success for investors in 2016. 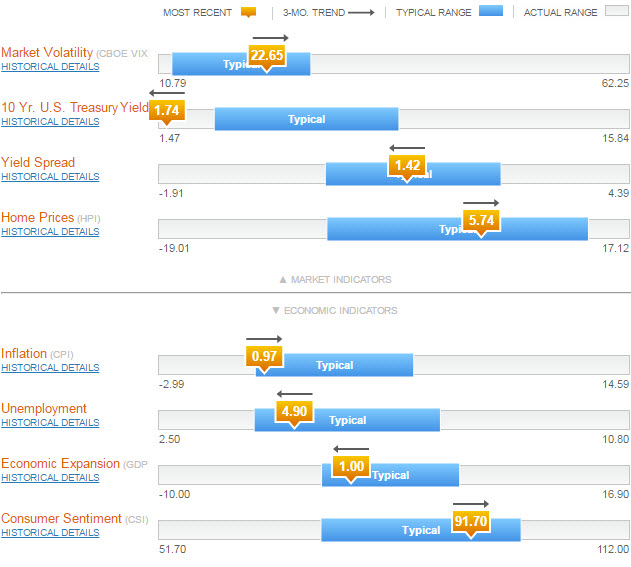 Accessed on March 22, 2016. This dashboard is intended as a tool to set context and perspective when evaluating the current state of the economy. For each indicator, the horizontal bar shows four things.

Inflation – Inflation (as measured by CPI year over year % change) decreased to 0.97% in February, down from the previous month’s reading of 1.34%. However, the three-month trend points towards rising inflation which will be one of the main watch points for the U.S. Federal Reserve as they evaluate the strength of the economy. Unemployment – The unemployment rate stayed constant at 4.9% in February with the addition of 242,000 jobs during the month. Even though the unemployment rate didn’t fall during the month, it did reflect an improvement in the job market since the labor force participation rate increased. February marked the 65th consecutive month of net job growth in the U.S.  The eventual outcome of low, sustained unemployment is higher wages which will encourage further increased inflation. What the current reading of these economic indicators suggests: Taken in isolation, inflation and unemployment suggest the U.S. economy continues to show signs of strength.

The February reading of the Economic Indicators Dashboard is an important reminder that the economy and the market are not the same. While key market indicators see a weak economy, economic indicators reflect a strengthening economy. Help your clients stay above the fray of these uncertain times by bringing their focus back to the long-term financial plan designed to help them reach their desired outcomes.
1 Represented by the Russell 3000® Index as of February 29, 2016The CBOE Volatility Index® (VIX®) is a key measure of market expectations of near-term volatility conveyed by S&P 500 stock index option prices.