The latest key U.S. economic and market indicators tracked in the Economic Indicators Dashboard confirm that as of December 2014, the U.S. economy continued on its path of growth and recovery. All indicators were in their respective historically typical range except for the 10-year U.S. Treasury Yield – which has been the case every month since the Spring of 2011 – and inflation, which dropped just below its historically typical range. Other notable shifts occurred in economic expansion and consumer sentiment – both of which improved since the previous month’s reading – and market volatility, which also rose, but remains at the low end of its historical range. 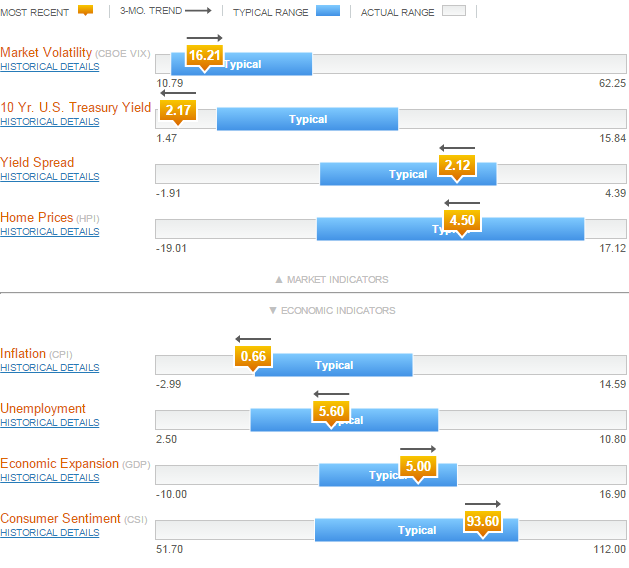 The U.S. inflation rate dropped to 0.66% in December (from 1.65% in November), putting it right on the cusp of falling below its historically typical range. The rate is now the lowest it’s been since October 2009 and certainly falls short of the 2% target inflation rate set by the Federal Reserve. Despite this, we don’t believe the drop in inflation is a sign of economic concern. Most of the decline in December’s inflation rate was due to the continued softening in gasoline prices. However, when excluding the impact of changes in energy and food prices – the two most volatile components of the Consumer Price Index – the inflation rate held steady at 1.6%. So, the recent decline in the inflation rate does not represent an across-the-board drop in prices (in fact, food prices  rose slightly in December). The most recent reading of the U.S. Business Cycle Index (November 2014) also suggests that the U.S. economy remains on a path of moderate growth amid low inflation.

Coming in at 5%, third quarter 2014 GDP growth was at its highest since the third quarter of 1999. It reflected strong consumer spending, fixed investment expenditures, government spending, exports, and a decline in imports. Following second quarter’s number of 4.6%, the economy has now posted its two strongest back to back quarters since 2003.

The decline in the energy prices also influenced consumer sentiment. In fact, in December it helped push consumer sentiment to its highest reading since January 2007. According to some analysts,1 consumers’ expectations for improved employment and wage growth also bolstered the indicator’s level. Historically, consumer sentiment has acted as a reasonably strong indicator of the economy’s future direction, so its current level and trajectory appear to be a positive.

Some investors may have greeted the 3-point increase in the market volatility index reading between November and December 2014 with concern. However, the current level of the “fear index,” as the VIX is often dubbed, is well within its historically typical range, below its long-term historical average of 19.93, and far below the all-time high levels it reached in November 2008 (62.25). At current low levels, it appears that market participants are still anticipating reasonably favorable conditions moving forward.

December 2014’s decline in the U.S. inflation rate and increase in market volatility may have been alarming to some investors. However, viewed in the context of the overall picture of the U.S. economy may put things into a more positive light. Those indicators that tend to be “leading” such as economic expansion and consumer sentiment are tracking in a good direction. Indicators that tend to be more “lagging,” such as market volatility, are plotting along within historical norms. These all add up to an economy that continues on the path of growth and recovery.
1 Based on monthly observations recorded between January 1990 – December 2014.Data stated is historical and not a guarantee of future results. Data displayed in the Economic Indicators Dashboard are reflective of current data as provided by the data sources including any revisions to previous data. These revisions may change historic data points and historic ranges for some or all indicators. These changes are usually due to seasonal adjustments to previously supplied data.