The most recent updates to the U.S. economic and market indicators we track in the Economic Indicators Dashboard support the notion of a stabilized domestic economy. Only two indicators—the 10-year U.S. Treasury Yield and inflation—fell below their typical historical range in February. Economic expansion and consumer sentiment also showed some noteworthy trends. 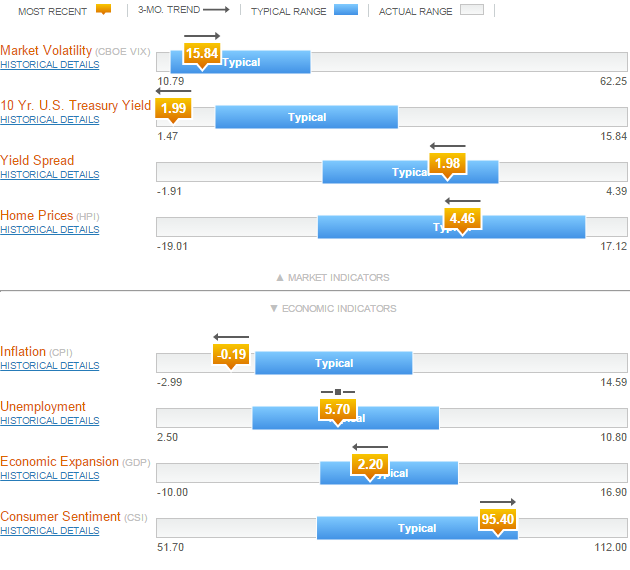 Accessed 3/18/2015 How do I read this chart? This dashboard is intended as a tool to set context and perspective when evaluating the current state of the economy. For each indicator, the horizontal bar shows four things.

Despite widespread belief that the 10 Yr. U.S. Treasury yield had no place else to go but up, it fell to 1.99% at the end of February. As the economy continues to stabilize, and the Fed signals the potential for rate rises later this year, we are likely to see the U.S. Treasury yield finally rise. Investors may be well served by reassessing their portfolios to make sure they have adequate diversification, and are not concentrated in any one sector or investment.

The combination of low Treasury yields and cheap energy prices continues to keep inflation at exceptionally low levels. Although the low yields may have been painful to investors relying on fixed income payouts, at least inflation does not appear to have unduly eroded the purchasing power of those historically low coupons. A far worse scenario would have been low yields coupled with high inflation—causing investors to lose significant purchasing power over time.

The most recently reported quarterly GDP growth number is 2.2% from December 2014. Although lower than the 5% growth reported the previous quarter, in part due to lower government spending, this should not unduly alarm investors. GDP growth numbers regularly vary quarter-to-quarter while following longer trends. Russell’s market strategists anticipate 3% GDP growth in 2015.

Perhaps most indicative of the relative economic calm is the still-high consumer sentiment. This metric is based on surveys tallying the degree of optimism consumers have for the general economy and their personal financial circumstances. It rapidly increased month-over-month from 81.8 last July to a peak of 98.10 as of January. Although it slipped slightly in February, to 95.4, it remains in the upper end of its typical historical range.

Despite the news headlines sounding alarms about slumping oil prices, the economic risks of a strong U.S. dollar and scattered political worries around the globe, the U.S. economy appears to be in a healthy position. Most investors are best served by taking a long-term portfolio view and not making tactical market-timing decisions. As such, these recent economic and market metrics are good news.