The 10-year treasury yield was below its historical typical range and inflation was near the bottom of its historical typical range at the end of January 2016. Though inflation bumped up slightly in January, both these indicators have been low relative to history for quite a while. On the other hand, consumer sentiment has been steadily increasing for the last three months putting it at the high end of the historical average range. 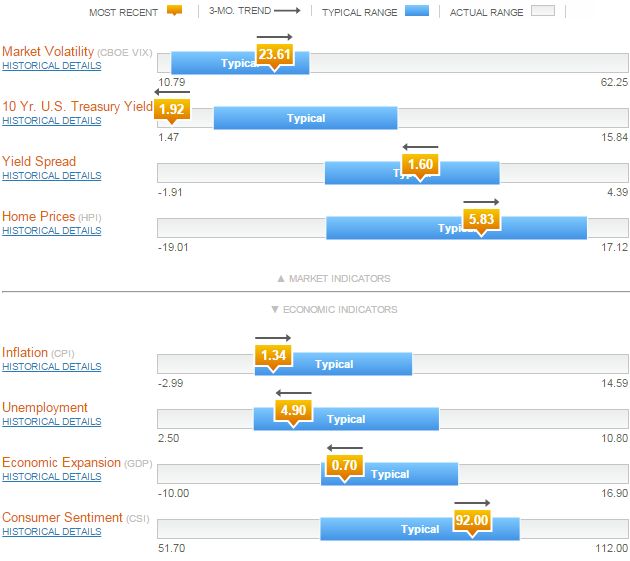 Accessed on February 22, 2016. This dashboard is intended as a tool to set context and perspective when evaluating the current state of the economy. For each indicator, the horizontal bar shows four things.

The yield on the 10-year U.S. Treasury fell to 1.92% at the end of January, down from 2.21% at the end of December. The decline can be attributed at least in part to an increased demand for Treasuries, and consequently higher bond prices. With the recent market volatility, and an increased demand for Treasuries which are viewed as safer investments than stocks, it seems as if many investors are being compelled by fear rather than fundamentals. The historically “normal” range for the 10-year U.S. Treasury yield between 3.16% and 8.81%. It has been quite a while since the 10-year U.S. Treasury Yield has been in the “normal” range. In 2015 the average daily yield hovered close to 2.1%, which was a bit lower than its average daily yield of 2.5% in 2014. Given the Federal Reserve’s decision in December 2015 to raise short-term interest rates, some expected long-term interest rates to rise, too. So far this has not been the case. Some analysts attribute this recent disconnect to increased demand for (and hence upward price pressure on) 10-year U.S. Treasuries from investors searching for yield in response to challenging times in emerging markets and the global commodity markets. However, rather than get caught up in the daily news headlines, we think taking a more holistic view of the overall economy is wiser for long-term investors. How the Fed will handle the possibility of future rate hikes in 2016 remains to be seen, but the Fed’s decision to raise rates at the end of 2015 is seen to be a sign of economic strength.

In January, inflation continued its slow, upward trend, rising to .66%. That is a good sign for the strength of the U.S. economy because it brings inflation that much closer in line with its historical typical range of .67%-6.58%. Perhaps the Fed’s decision to raise short-term interest rates in 2016 will contribute to the forecast for a slight increase in inflation that some economists are expecting in 2016; however, with the trajectory of the price of oil being unknown, this is hard to know for sure. Regardless, inflation is still very low based on historical levels.

Consumer sentiment continues to strengthen, keeping the metric at the upper end of its historical typical range, ending January 2016 at 92.0. This is an increase from 91.3 in December, and 90.0 in November. This index gauges consumer attitudes on the general business climate, their personal finances, and spending. The sustained optimism is likely based on a number of factors ranging from cheap gas, low inflation, and continued low unemployment. Even if inflation does nudge up slightly, the increase is not likely to be sufficient to markedly affect consumer sentiment.

In spite of recent market volatility the U.S. economy appears to be on strong footing. With low inflation and high consumer sentiment, we don’t see any startling indicators on the dashboard. However, it is critical to continue to watch for developing trends over the balance of the year.