Some may have judged the Fed’s decision not to raise rates in September as a sign of economic weakness in the U.S. In this case, global concerns probably played a greater role in that decision as the U.S. economy appears on the path of continued moderate growth. The factors and statistics presented by the Economics Indicators Dashboard support the view that the economy remains in pretty good shape. To better understand this, let’s review two of the factors displayed in the Dashboard that support this view: Homes Prices and Consumer Sentiment. 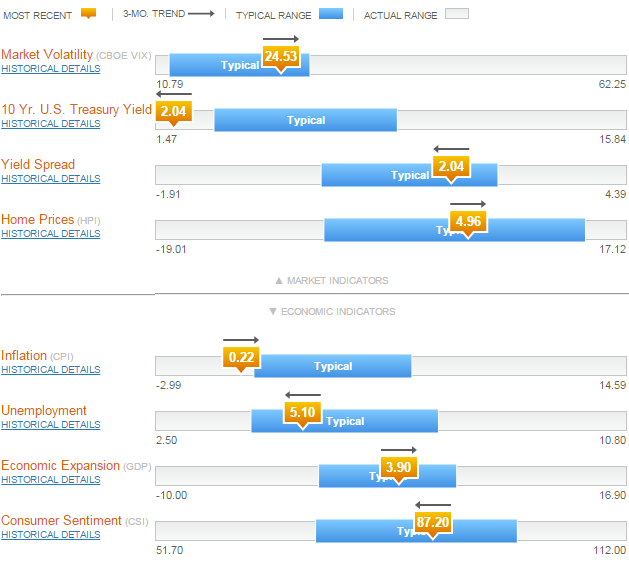 Accessed on October 16, 2015. How do I read this chart? This dashboard is intended as a tool to set context and perspective when evaluating the current state of the economy. For each indicator, the horizontal bar shows four things.

Those who experienced the last recession don’t need a reminder of the housing market’s importance to the U.S. economy. The slow-down of the housing market and corresponding deterioration of related credit markets, which started in 2006, eventually led to the worst U.S. recession since the 1930s. Housing values greatly influence consumer spending and corresponding economic growth. People tend to spend more when they feel good about their home’s value, so a confident housing market sends positive ripples through the entire economy. Housing sales and prices can be one of the better indicators of relative economic strength. The current year over year housing price increase of almost 5% has held steady for most of 2015, and is placed comfortably within the range of historical norms. This is a good indication that the housing market is on solid ground, and does not appear to be declining or in overbought state. Ongoing moderate increases in housing prices should help support a growing economy.

Consumer Sentiment saw a slight decrease in September from prior months as concerns about China, falling commodity prices, and global growth weighed on confidence levels. This likely reflects consumers’ increasing awareness that global trends can impact job and wage prospects here in the States, and not necessarily a sign of diminished growth prospects for the U.S. economy. Even with this modest pullback, Sentiment remains at the higher end of the historical range, indicating that U.S. consumers maintain a positive outlook for the economy and their own prospects. A confident consumer is an important component to the ongoing economic growth story. The U.S. economy is consumer driven. You can debate the accuracy of the “70% of U.S. GDP growth is consumer driven” quote, but you can’t debate that the majority of the economy is driven by consumer. So a healthy, confident consumer bodes well going forward.

Housing and Consumer Sentiment are only two factors amongst many when it comes to assessing the strength of the economy. However, a strong consumer is critical to economic success in this country, and these two factors paint a relatively healthy picture. Combine the healthy consumer with other positive measures evident in the economy and the U.S. to still be on the path to growth.
Site preferences
Login Register