In the latest update to the Economic Indicators Dashboard, two indicators were outside of their historical typical range as of the end of January: the 10-Year U.S. Treasury Yield, which was 1.64% and Inflation, which was 0.66%. 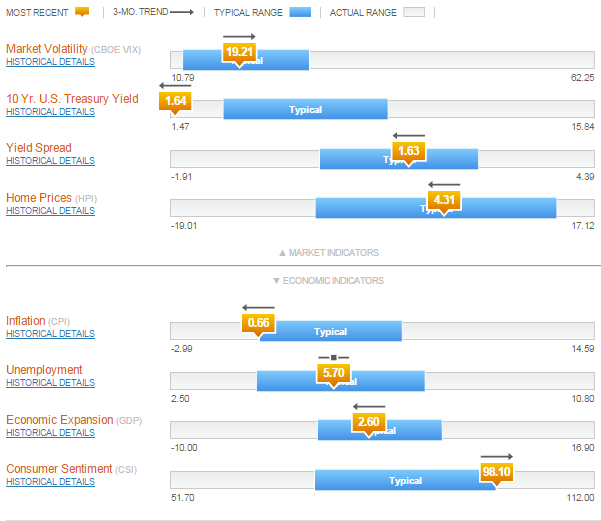 Accessed 2/23/2015. How do I read this chart? This dashboard is intended as a tool to set context and perspective when evaluating the current state of the economy. For each indicator, the horizontal bar shows four things.

In January, the 10-Year U.S. Treasury Yield unexpectedly fell to 1.64% despite renewed forecasts by many for higher 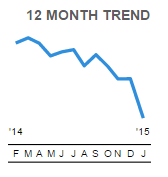 rates in 2015. While we still have a ways to go in 2015, this was an interesting way to start the year. The 10-Year U.S. Treasury yield has been outside the historical typical range of 3.24% to 8.85% for some time now and this unexpected drop brings it to its lowest level since April of 2013, when it dropped to 1.62%. The reason for the dip is not completely clear, but many have suggested that U.S. Treasuries continue to have strong demand from non-U.S. investors where equivalent Treasury options have even lower, less attractive, yields. For instance, at the end of January, the 10-Year German Bund had a yield of just 0.27%. It is important to note, however, that since the end of January, the 10-Year U.S. Treasury has rallied bringing yields back above 2% as of February 20, 2015. Inflation In the latest release of Consumer Price Index data from the Bureau of Labor Statistics (BLS), the CPI Index YoY% 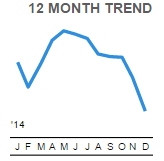 change was just 0.66% vs. 1.28% at the end of November 2014. This reflects much lower inflation than many expected and much lower than the Federal Reserve’s target of 2%. It seems the main driver of this fall is energy prices – and more specifically the falling oil prices of late. On Main Street, consumers are enjoying lower gas prices at the pump, which has resulted in an overall lower inflationary environment, than we would otherwise be experiencing. The BLS uses a basket of goods to measure inflation, which can be separated into eight sub-baskets, as represented in the chart below. Among those sub-baskets, transportation, which includes energy, had the largest price decline from November to December. Also, somewhat surprisingly, apparel prices were down. While low inflation may not be what we were hoping for in terms of a rebounding economy, there is a silver lining in that it might be a good time to fill up the tank and take the family down to the mall for some shopping. 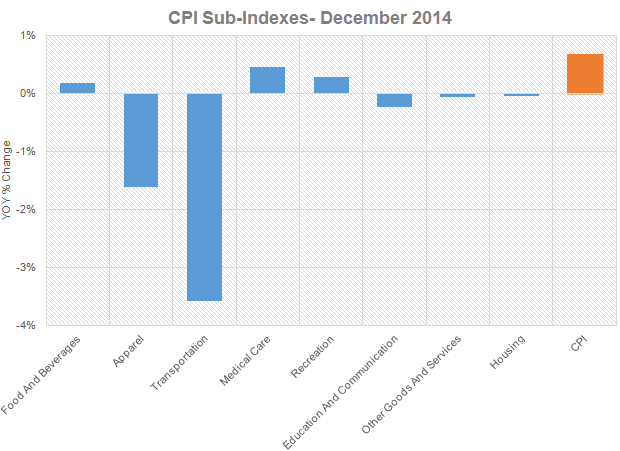 The U.S. economy and markets are complex and ever evolving. They are reacting to and assimilating a whole host of internal and external conditions that can be near possible to predict on a daily basis. Understanding that and staying plugged in can help you adapt your – and your clients’ - market expectations and position your clients’ portfolios to reflect new economic realities, whether expected or not.