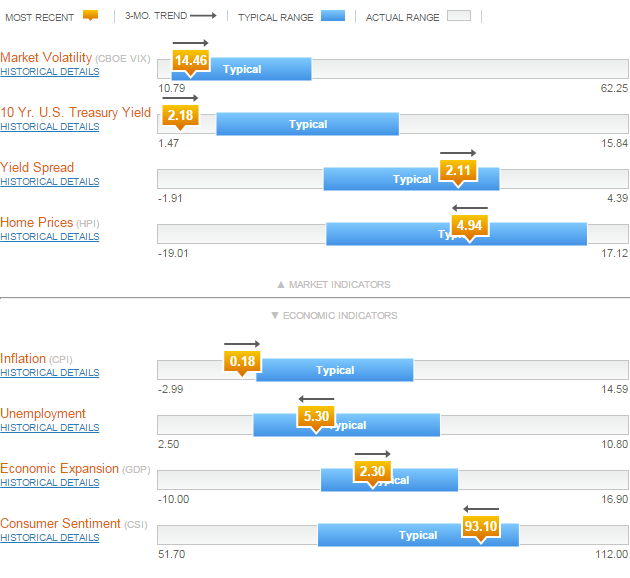 Accessed on August 11, 2015. How do I read this chart? This dashboard is intended as a tool to set context and perspective when evaluating the current state of the economy. For each indicator, the horizontal bar shows four things.

Market volatility (measured by CBOE VIX) trended slightly upward in July to 14.46%, but remains on the lower end of the typical historical range, around the year-to-date low, set in May (13.28%).  Much of July’s turbulence is attributable to Greek, Chinese, and Puerto Rican market and economic troubles. Looking forward, Russell’s strategists maintain the view that there is a low risk of contagion to U.S. markets other than increased volatility.             The July reading of the 10 Yr. U.S. Treasury Yield remained below the typical historical range at 2.18%.  However, the low month-end reading hardly describes July’s rollercoaster yield.  The yield peaked in July near the year-to-date high at 2.43% but slowly slid downward through the end of the month.  Directionally, with expectations that the U.S. Fed will raise rates in September we expect the 10 yr. yield to trend back toward its typical historical range.

The latest release of the Consumer Price Index (CPI) from the Bureau of Labor Statistics reflected an increase in inflation, albeit, a slight one.   Marking nearly forty months under the U.S. Fed’s 2% target inflation rate, the year-on-year percentage change was just 0.18%, burdened by low and decreasing oil prices.  Inflation is one of the key considerations the Fed will take into account as it weighs a potential interest rate hike in 2015. Unemployment reached a four-decade low in July before rising back upward slightly.  The jobs market is strong, adding over 200,000 jobs for the 10th month in the past year, with no indications that it will slow down in the foreseeable future. Unlike the decline observed in unemployment figures, wages have remained somewhat stagnant. Lack of wage growth may stave off a rate increase expected later this year.  However, wage stagnancy is indicative of the strength of the jobs market – that is, employers are having no difficulty finding workers to fill open job positions (whereas, they would have to increase wages to attract workers if they were struggling to fill positions). The U.S. economy, measured by GDP, expanded at a seasonally adjusted annual rate of 2.3% in July.  While improving over previous months, this reading of GDP isn’t as strong as the breakout in growth that many forecasters have anticipated for the second half of the year.

July’s generally strong data reading improves our confidence in a September Fed liftoff of interest rates. Continued strength in the job market along with growing GDP over the last few months are encouraging signs for the U.S. economy as we start the second half of 2015. And while we expect September to mark the first U.S. interest rate increase since 2008, our strategists believe that rates will rise at a measured pace from there, a view echoed by Fed Chair Janet Yellen as well as other Fed Governors.
Standard Deviation is a statistical measure that reflects the degree to which an individual value in distribution tends to vary from the mean of the distribution. Standard Deviation is a useful tool in measuring the historical typical range as 1 Standard Deviation includes approximately 68% of the historical values in a normal distribution. Using this measurement allows us to exclude the more extreme values which would not be as probable to see from the indicator. Data stated is historical and not a guarantee of future results. Data displayed in the Economic Indicators Dashboard are reflective of current data as provided by the data sources including any revisions to previous data. These revisions may change historic data points and historic ranges for some or all indicators. These changes are usually due to seasonal adjustments to previously supplied data.