The July reading of the Economic Indicators Dashboard reflects that the markets shrugged off near-term concerns regarding the economic impact of Brexit: market volatility was back on the low end of its historically typical range and U.S. markets (Russell 3000® Index) continued to climb in July. We believe that a combination of favorable employment conditions, emerging wage pressures and continued U.S. economic growth may lead the Federal Reserve to raise interest rates this year. We believe this is more likely to come in December than in September. Let’s look at some of the recent Economic Indicator Dashboard metrics in closer detail: 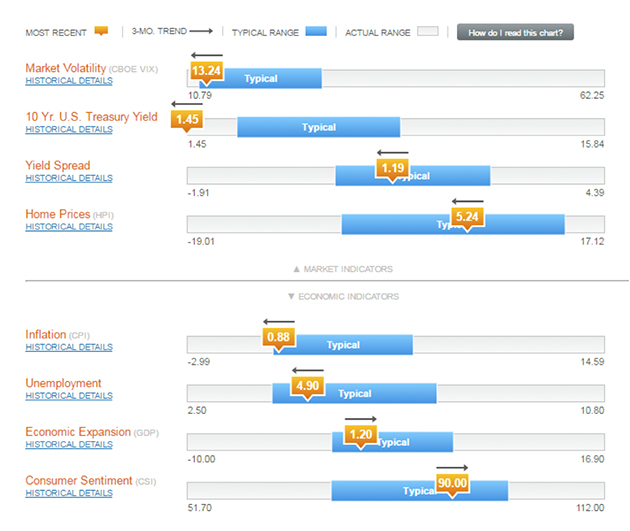 Accessed on Monday, August 22, 2016. This dashboard is intended as a tool to set context and perspective when evaluating the current state of the economy. For each indicator, the horizontal bar shows four things. Unemployment continued to improve: following a solid June, an additional 255,000 new nonfarm payroll jobs were created in July, bringing the unemployment rate down to 4.9% by the end of the month. Further sign of labor market health came in the form of wage inflation, which is slowly picking up. The employment cost index (ECI), a quarterly economic series detailing the changes in the costs of labor for businesses in the U.S. economy, increased 0.6% for the second quarter. The U.S. economy, measured by GDP, expanded at a seasonally adjusted annual rate of 1.2% in the second quarter, below consensus expectations of 2.6%. While disappointing, it wasn’t a disaster. Much of the slowdown could be attributed to built-up inventories, reduced business spending, and a lower than expected level of government spending. The forces that have held GDP and earnings low recently – a strong dollar and concern in the energy sector – have been diminishing, leading Russell Investments to expect modest, reasonable strong economic growth going forward. Inflation continues to remain low, driven by low energy prices, specifically gasoline prices. The weak energy prices and muted inflation expectations flattened the yield curve, moving the 10-year Treasury down to 1.45% – a level not seen since the summer of 2012 (1.43% on July 25, 2012). Home prices recently suffered a slight decline – but that is likely to be temporary. A recent survey of members of the National Association of Home Builders, suggests an expectation that sales of single family homes will increase over the six months. If that comes to pass, then the longer-term trend of home prices is still a stable upward march.

Solid economic growth in the U.S., continued rising employment, and early signs of wage pressure may put an increase in interest rates back onto the Federal Reserve’s agenda before the end of the calendar year, provided global market volatility doesn’t spike.