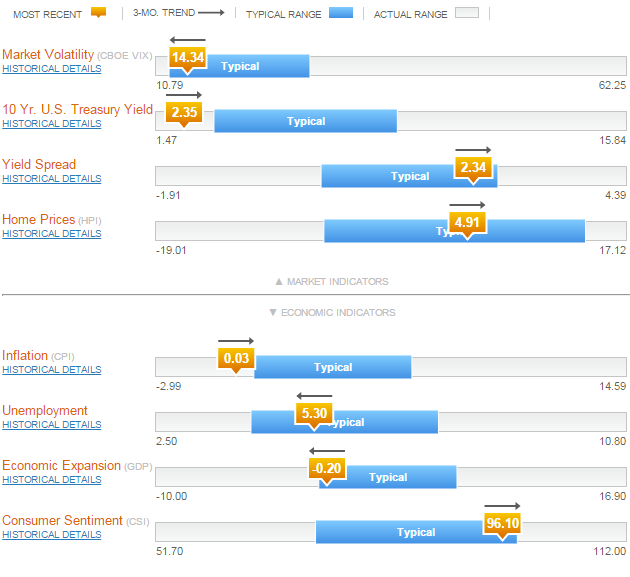 Accessed on July 17, 2015 How do I read this chart? This dashboard is intended as a tool to set context and perspective when evaluating the current state of the economy. For each indicator, the horizontal bar shows four things.

Market Volatility (as measured by the CBOE VIX Index) ticked upward by more than a percentage point in June, increasing from 13.28% in May to 14.34% in June. Year-to-date volatility is down almost 25% from where it began in January (19.21%). June’s increase in volatility, we believe, was primarily due to the market anticipating the Fed’s increase in U.S. interest rates as well as market activity caused by the Greek debt crisis and Chinese equity market sell-off. 10 Year U.S. Treasury Yield ticked upward, reaching a year-to-date high, as well as reaching the highest point since September 2014, peaking at 2.47%, before ending the month 2.35%.  We expect that yields will continue to increase exerting downward pressure on bond prices as the market anticipates the Federal Reserve tightening of monetary policy.  Despite the increase, by historical standards the 10-year Treasury yield remains quite low.

Inflation has moved out of the red and into the black. June’s inflation reading crossed zero for the first time since January (0.66%). Inflation increased from -0.11% in May to .03% in June, a modest increase of 0.14%.  The Fed’s target inflation rate is 2%, so this marginal increase in inflation should be viewed as a positive. We anticipate inflation to increase in coming months as the U.S. economy continues to strengthen. Unemployment fell to the lowest point observed since the spring of 2008, when the Global Financial Crisis started. The unemployment rate decreased by 0.2% to 5.3% from 5.5% in May.  This decrease exceeded consensus expectations for the unemployment rate as the economy added over 220,000 new jobs during the month. Consumer Sentiment improved in June which is another good sign for the U.S. economy. Compared to the May reading of 90.70, the June reading of 96.10 was a significant increase. Increasing wages, cheap gas at the pump and more optimism about the future all contributed to an improvement in this indicator.

As we progress through the summer months, we believe that U.S. investors should stay focused on the Fed and the likely increase in interest rates while trying to keep external news stories such as Greece and China in the proper perspective. Aside from contributing to increased volatility, we do not believe that Greece or China present a high level of contagion risk to global financial markets. Our central case remains that Fed rate hikes will begin in September and will be gradual from there. Unemployment has returned to pre-2008 levels, residential home values are increasing, personal consumption expenditures are increasing and business inventories are up – all in all the U.S. economy appears to be on a healthy path.
Andrew Capets is an Intern for US Private Client Services, Capital Market Insights.
Standard Deviation is a statistical measure that reflects the degree to which an individual value in distribution tends to vary from the mean of the distribution. Standard Deviation is a useful tool in measuring the historical typical range as 1 Standard Deviation includes approximately 68% of the historical values in a normal distribution. Using this measurement allows us to exclude the more extreme values which would not be as probable to see from the indicator. Data stated is historical and not a guarantee of future results. Data displayed in the Economic Indicators Dashboard are reflective of current data as provided by the data sources including any revisions to previous data.