The dominant story of the second quarter came right at the end: the decision on June 23rd by the voters of the United Kingdom to leave the European Union. With this unexpected and unprecedented decision, U.S. and global markets saw a spike in market volatility. At the same time the U.S. bond market rallied as investors looked for safety. However, despite the initial negative market reaction, U.S. equity markets finished the quarter up 2.6% as measured by the Russell 3000® Index. It is still unclear what the longer term implications of Brexit will be, and how this change will impact global markets in months to come.

All of these dynamics played out in the June edition of the Economic Indicators Dashboard. 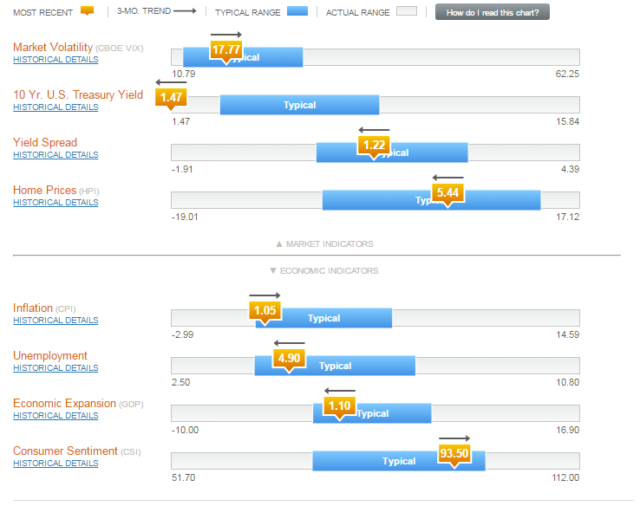 Market volatility – Reflecting the greater risk of sudden market movements in either direction, the CBOE VIX index had quite a roller-coaster ride in June. It started the month at 14.42, close to the bottom of its historically typical range. On June 23rd, the day of the Brexit vote, the VIX spiked to 26 – hovering close to the top of this indicator’s historically typical range. As the initial shock of the Brexit wore off, the VIX settled back down to where it had been for most of April and May – around 17.77. The chart below shows the VIX level for Q2, with the clear Brexit spike, and then return to “normal” levels. 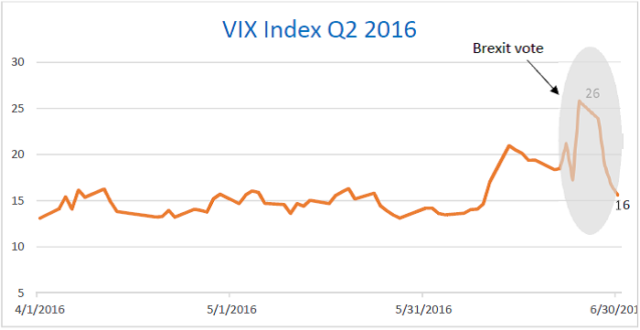 10-Year U.S. Treasury Yield – The yield on the 10-Year U.S. Treasury declined to 1.47% at the end of June, down from 1.83% at the beginning of the month, as global investors seeking a safe haven amidst the uncertainty of the United Kingdom’s decision to exit the European Union drove up prices. This is the continuation of the trend of historically atypical low yields, reflecting investor concern about lackluster global growth, low inflation, negative interest rates introduced by several countries, and uncertain central bank policies. Currently the U.S. Federal Reserve seems to have shelved the idea of near-term interest rate hikes, although Russell Investments still expects at least one rate increase before the end of the year.

Consumer Sentiment (CSI) – The consumer sentiment index seen here is measured by the University of Michigan’s Consumer Sentiment Index. It is a national measure of how confident individual households feel about their own financial health, and the broad economy. At the end of June the index measured 93.5, and so far, year-to-date the index has generally trended upwards. The positive sentiment can likely be attributed to low unemployment, minimal inflation, and fairly cheap gas prices.

Volatility is likely to continue for the foreseeable future. It is nearly impossible to predict events such as Brexit, or other events that may jolt markets in the short-term. Overall most of the economic indicators tracked in the Dashboard are within their respective historical typical ranges, indicating the U.S. economy appears healthy. As we progress further into 2016 it will be important to watch for any indications from the Fed regarding future interest rate hikes.