At first blush, the latest reading of the Economic Indicator Dashboard appears to be displaying a disturbing trend: seven of the eight indicator arrows are heading south (left). But, is this actually a bad thing? Does this truly suggest the U.S. economy is coming to a crashing halt? 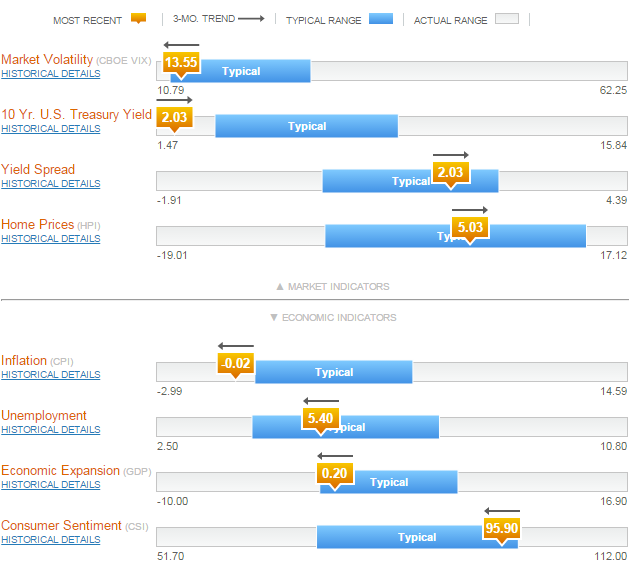 Accessed on 4/15/2015. How do I read this chart? This dashboard is intended as a tool to set context and perspective when evaluating the current state of the economy. For each indicator, the horizontal bar shows four things. After the events of the last decade, those are all reasonable questions to ask. But, in our view at Russell, the short answer is: “No.” There are a few factors at play here. So let’s do just that. The Dashboard is divided into two sections: Market Indicators and Economic Indicators. Some readers might also short-hand these sections as “leading” (market) and “lagging” (economic). Let’s review each individually:

Of the “leading” indicators, despite 3 of 4 moving left on the chart, they all appear to be positioned to indicate continued economic growth.

Of the “lagging” indicators of economic measurement, three of the four are well within historical ranges and support the view that the U.S. economy is on solid ground. The fourth indicator, inflation, is outside the typical range, which may be explained by lower energy prices. But that’s generally good for the overall economy.

Despite the initial appearance of the majority of the economic indicators tracked in the Dashboard heading in the “wrong” direction at the same time, a second look at the measures verifies that the U.S. economy currently appears to be on solid ground. There does not seem to be a compelling reason for investors to move away from their long-term strategy of investing in globally diversified portfolios adjusted to their individual risk tolerance.

1 The VIX index is the commonly used name for the CBOE SPX VOLATILITY INDEX.