The year started with increased market volatility and heightened concerns about economic growth prospects. Once oil prices began stabilizing in February, sentiment began to moderate and equity markets reversed course from early year lows. The rally picked up additional steam in March and markets closed the quarter in proximity of their 2016 starting points. The financial outlook appears relatively unchanged as well. Expectations are for modest growth and moderate market returns, similar to when the year started. The Economic Indicators Dashboard supports this ongoing view. 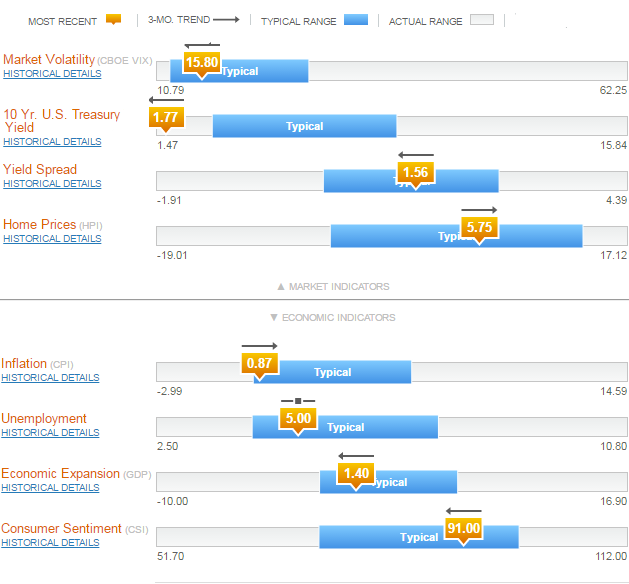 Accessed on April 21, 2016. How do I read this chart? This dashboard is intended as a tool to set context and perspective when evaluating the current state of a sample of asset classes. The ranges of 12 month returns for each asset class are calculated from its underlying monthly index returns. The stated inception date is the first full month of an index's history available for the dashboard calculation. Here is how to read the graphic on this page: FOR EACH INDICATOR, THE HORIZONTAL BAR SHOWS FOUR THINGS A GRAY BAR shows the full range of historical rolling 12-month returns for a sample of asset classes. A BLUE COLOR BAND represents the typical range (one standard deviation away from the mean, i.e. 68% of historical observations) of rolling 12-month returns for these asset classes. AN ORANGE MARKER represents the most recent 12-month return of the asset classes.

The VIX, which jumped up in late 2015 and early 2016, has settled back to the mid-teens at 15.8, falling at the lower end of its historical typical range. This suggests that U.S. investors believe that volatility in the near term won’t be as high as it’s been in the last 6–12 months. Of course, that does not ensure that equity markets are going to be delivering double digit returns. Instead it suggests the potential for a more moderate environment capable of positive returns if corporate earnings continue on track and don’t disappoint.

Housing prices and sales can be one of the better indicators of relative economic strength. Home owners tend to spend more when they feel that home values are improving. Oftentimes, an encouraging housing market sends positive ripples throughout the economy as a whole. The current year-over-year housing price increase of almost 6% continues an upward market trend that started in late 2014. This is a good indication that the housing market is on solid ground and does not appear to be declining or in overbought territory. A continuation of this housing trend should help support continued growth in the economy.

A confident consumer is an important aspect of the ongoing economic growth story. Consumer Sentiment saw a slight decrease in March from prior months. This was likely driven more by the market volatility of the start of the year than to changing economic prospects. Even with the modest pullback this month, Sentiment remains at the higher end of the historical range. Consumers are maintaining a positive outlook for the economy and their own prospects. Accuracy of the often cited statement “70% of U.S. GDP growth is consumer driven” can be debated, but undisputable is the statement that the U.S. economy is driven by consumer spending. A confident consumer bodes well for the economic outlook, and current levels indicate that.

The VIX, housing, and consumer sentiment are three indicators among many when it comes to assessing the overall strength of the economy and the markets. Entering 2016, both the economy and equity markets appeared to be on a path of moderate growth. As we move into April, none of these three indicators, or others on the Economic Indicators Dashboard, suggest that this path has been altered.