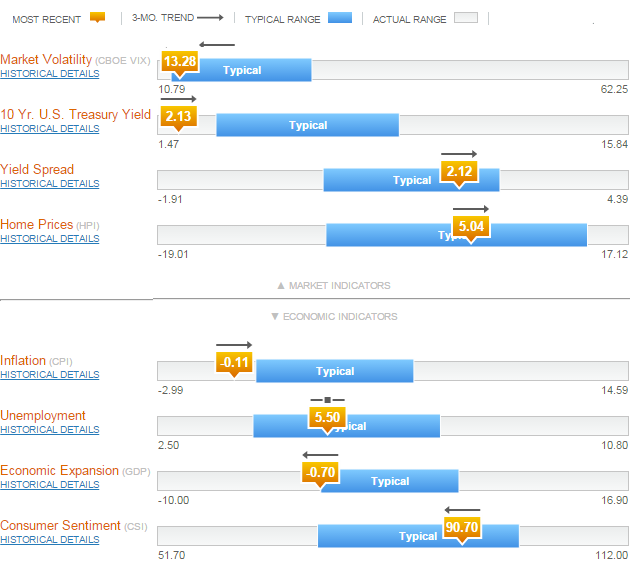 Accessed on June 15, 2015. How do I read this chart? This dashboard is intended as a tool to set context and perspective when evaluating the current state of the economy. For each indicator, the horizontal bar shows four things.

Market Volatility has steadily decreased since the beginning of 2015. In January, volatility (as measured by the CBOE VIX Index) was slightly over 19%, right in the middle of the typical historical range. Since that time, it has decreased to the current level of 13%, which is at the low end of the historical range. 10 Yr. U.S. Treasury Yield is still very low by historical standards. However, it has risen sharply from its low of 1.64% in January, and is now currently sitting well above 2.0%. The yield is expected to continue to trend upward as the market anticipates U.S. Fed action to start raising interest rates. The May reading of 2.13% marks the highest month end yield seen year to date. Russell strategists expect the U.S. Federal Reserve to start tightening monetary policy in September. May’s strong employment report gives confidence to the view that the economy continues to improve and can handle higher interest rates. An increase in interest rates should be viewed as a signal from the Fed that they believe the U.S. economy is finally on stable footing following the Global Financial Crisis.

Core Inflation fell 0.09% to -0.11% from April’ reading of -0.02%. Falling energy prices (which appear to have recently stabilized) are mainly responsible for the negative inflation number, pushing it well outside the expected historical range. Russell expects low to moderate inflation in the near term. Unemployment rose in May to 5.5%, a slight increase from April, when the unemployment rate was 5.4%. While the top-line number worsened slightly, a closer reading of the employment report indicates an increase in labor force participation, which is good news for the economy, and boosts the odds of a September rate hike in our view. Economic Expansion (as measured by GDP) turned into economic contraction in May. Annualized GDP growth in May was measured at -0.70%, down almost 1% from April. The U.S. economy appears to have hit a soft patch in the first two quarters of the year. However, Russell strategists believe that economic growth should be robust for the remainder of 2015. Despite the low reading, May’s economic expansion still remains within one standard deviation of the historical range.

We believe that these eight indicators will influence the shape of continued market and economic recovery. Despite a few lackluster readings for May, don’t sweat the small stuff: on the whole we consider May’s data to be strong.
Andrew Capets is an Intern for US Private Client Services, Capital Market Insights. Standard Deviation is a statistical measure that reflects the degree to which an individual value in distribution tends to vary from the mean of the distribution. Standard Deviation is a useful tool in measuring the historical typical range as 1 Standard Deviation includes approximately 68% of the historical values in a normal distribution. Using this measurement allows us to exclude the more extreme values which would not be as probable to see from the indicator.