U.S. equity markets (represented by Russell 3000® Index) continued to rally for the third straight month in May 2016, up almost 2% for the month and up 9.4% for the past three months. The Federal Reserve appears to be in a holding pattern regarding interest rates for the time being, although the Russell Investments strategist team still expects at least one rate hike before the end of 2016. Similar to last month, the same seven of eight major economic and market indicators tracked in the Economic Indicators Dashboard remained within their historical typical range for May. The economic indicators for inflation and economic expansion were noteworthy for the month. 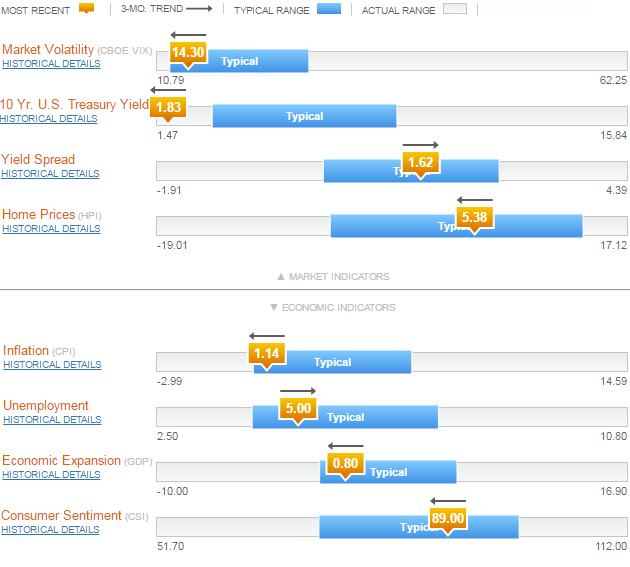 Accessed on June 12, 2016. How do I read this chart? This dashboard is intended as a tool to set context and perspective when evaluating the current state of a sample of asset classes. The ranges of 12 month returns for each asset class are calculated from its underlying monthly index returns. The stated inception date is the first full month of an index's history available for the dashboard calculation. Here is how to read the graphic on this page: FOR EACH INDICATOR, THE HORIZONTAL BAR SHOWS FOUR THINGS A GRAY BAR shows the full range of historical rolling 12-month returns for a sample of asset classes. A BLUE COLOR BAND represents the typical range (one standard deviation away from the mean, i.e. 68% of historical observations) of rolling 12-month returns for these asset classes. AN ORANGE MARKER represents the most recent 12-month return of the asset classes.

Inflation increased in May to 1.14%, up from a reading of 0.87% in April. The increase in inflation comes partially from oil prices beginning to stabilize around $50 and a falling U.S. dollar. Although oil and the dollar may still move, they are settling in at more reasonable levels. The economic indicator is still near the low end of its historical typical range, but has been moving toward more normal levels.

After an initial first quarter GDP growth estimate of 0.5%, a revision at the end of May resulted in an increase to 0.8%. Improvements in new home construction (17.1% actual vs. 14.8% estimate) and the value of inventories ($69.6 billion actual vs. $60.9 billion estimate) are responsible for the increase in the indicator. Stronger retail sales, goods exports and home sales in early April will likely support further GDP growth in the second quarter.

With much of the dashboard in May 2016 remaining at similar levels to the previous month, the economy continues to look healthy and the change in inflation and GDP improvement in 2016 show moderate growth in the U.S. All eyes will be on the Fed as it decides when next to raise interest rates.
Drew Tolson is a summer Intern for Capital Market Insights at Russell Investments.