With just a few more days to go before the Presidential election and the next Federal Reserve meeting, the latest reading of the Economic Indicators Dashboard shows that, as of October 26, all key indicators are within their historical typical range, with the exception of the 10-Year U.S. Treasury Yield. Over the past month notable developments occurred in market volatility, inflation, economic expansion and consumer sentiment. These indicators are discussed below. 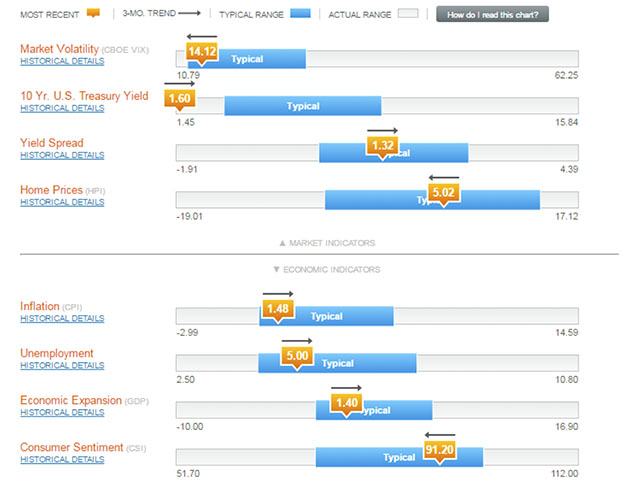 Accessed on Tuesday, October 25, 2016. Market volatility (CBOE VIX) spiked at 18 in early September, largely due to uncertainty surrounding central bank policy. However, by the end of the month volatility had settled down to 14.12 again and most major markets finished the third quarter in positive territory. This leveling off of volatility, along with generally low unemployment and strong wages, is encouraging as we approach the December meeting of the Federal Reserve. Russell Investments expects the Federal Reserve to raise rates at their December meeting. Inflation (CPI) has risen to almost 1.5% through the end of September – the highest it’s been in the past 12 months. According to the Bureau of Labor and Statistics (BLS), an increase in shelter and gasoline prices contributed to the change. The Gasoline Index alone rose 5.8% in September, accounting for more than half of the overall increase in the CPI. Although CPI remains below the Federal Reserve’s target of 2%, the upward move is a positive sign. Economic expansion (GDP growth) in the U.S. remains sluggish, the estimate for the second quarter was recently revised upward from 1.1% to 1.4%. Although the revision may not sound like much, it does mean that economic growth nearly doubled between Q1 (0.8%) and Q2. The Bureau of Economic Analysis attributes the upward revision for Q2 largely to an increase in business investments, private inventory investment, and improved exports. Consumer sentiment (Consumer Sentiment Index from the University of Michigan) surpassed its “historical typical” range in January 2015 – at 98.10 – and has generally hovered near the low 90’s ever since. More recently, it dipped to 87.9, the lowest it has been in the past 13 months. This dip is likely temporary and primarily influence by consumer concern about the potential outcome of the U.S. presidential election.

Overall, the Economic Indicators Dashboard reflects a sound U.S. economy on the eve of the U.S. election and November Federal Reserve meeting. In the short-term, market volatility may rise and consumer sentiment may temper until the impending political and monetary policy uncertainties are resolved.