After 2015 closed out as a flat year for most major asset classes, 2016 has been a difficult environment for investors so far with most major asset classes posting negative returns year-to-date (as of January 21, 2016). Last year’s concerns about the Federal Reserve’s pending decision to raise interest rates seem to have taken a back seat to the latest fears of slowing growth in China and the continued decline in the price of oil. Despite the rough start to the year, the Economic Indicators Dashboard is still showing a positive outlook for the economy. Let’s take a closer look at Volatility and the 10-Year U.S. Treasury Yield, which made some notable moves during the month since December 21, 2015. 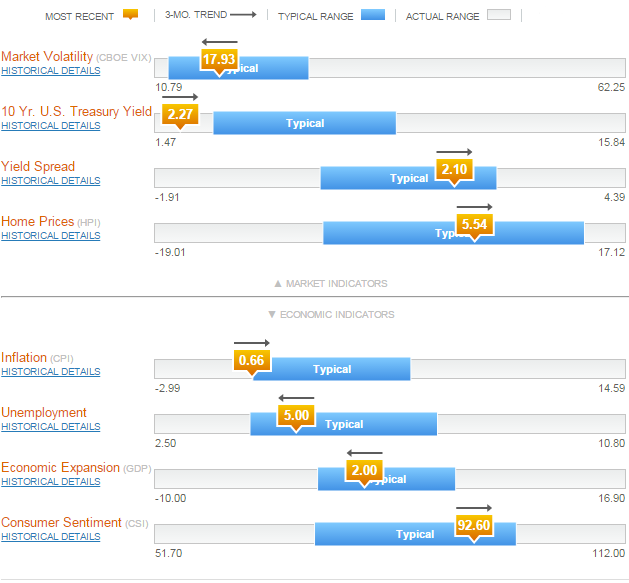 Accessed on January 22, 2016. This dashboard is intended as a tool to set context and perspective when evaluating the current state of the economy. For each indicator, the horizontal bar shows four things.

U.S. equity markets (represented by the S&P 500® Index) were unable to carry the momentum from the fourth quarter into the new year and have struggled so far in 2016, declining 8% year-to-date as of January 21, 2016. As a result, the market’s measure for volatility (the VIX)1 has steadily increased since the beginning of January from 18 to 26 (as of January 21st). While the recent increase in volatility may be unnerving for many investors, it is important to remember that periods of increased volatility are not uncommon for equity markets and should not be a reason to panic. In fact, the current VIX level is still within its historical typical range and well below the multi-year highs of 40 seen during last August’s market selloff. Of course, the recent volatility feels that much more heightened because we have enjoyed a period of below average levels of volatility. Between 2013 and 2015 the VIX was frequently below 15. Despite the challenging start to the year, Russell’s strategists still forecast economic growth and modest, positive equity returns for 2016. The latest bout of market turmoil should not be a reason for investors to abandon their long-term investment strategy, however the increase in the VIX1 could be reason to expect higher volatility in 2016 and a sign that the smooth ride equities have enjoyed over the last several years isn’t likely to continue going forward.

Just a few weeks after the Federal Reserve’s decision to raise interest rates for the first time since 2006, the yield on the 10-Year U.S. Treasury Note has surprisingly decreased. Driven by many of the same global economic concerns currently hanging over the equity markets (China and oil), the yield on the 10-Year U.S. Treasury Note has fallen from 2.3% at the start of the year down to 2.03% (as of January 21st). One of the major concerns for investors leading up to the first rate hike was that rates would increase too rapidly once the first rate rise was announced. This scenario could have led to sharp losses in fixed income portfolios, would have made it more difficult to buy big ticket items such as houses or cars and could have been a headwind for the economy in general. However, the fact that longer term rates have actually decreased since the first rate rise should serve as a reminder to investors that the Federal Reserve only has the ability to directly affect short-term interest rates and can only hope to have an effect on longer term rates. In Russell’s Annual Global Market Outlook, our strategists are projecting four rate hikes of .25% each by the end of 2016 with a Federal Funds rate target of 1.25% to 1.5% (currently at .37% as of January 21st). Seeing how rates have responded after the first increase should help reassure investors that even if the Federal Reserve continues to raise short-term rates, long term rates aren’t guaranteed to increase and are more likely to be determined by current economic conditions and expectations.

Admittedly, 2016 has started off as a challenging year for global equity markets. But in a lot of ways, uncertainty is always present in the markets. Often times it’s the periods with the greatest amount of uncertainty that provide investors with some of the best opportunities. Remind clients that the recent volatility should not be interpreted as a reason to change course, but rather as a chance to review their current strategy together and make sure it will give them the best opportunity of reaching their long-term goals.