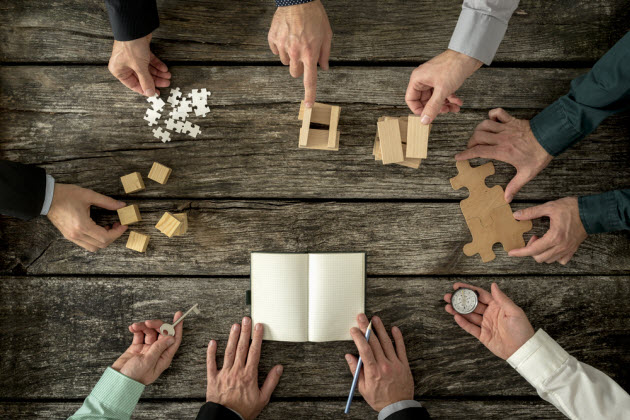 Julie Rainmaker has a problem. Two of the five members of her $500 million team aren’t getting along, and it’s causing friction for the whole team. Worse, it’s beginning to impact clients. The two quarrelling team members each recently called the same client about the same topic within a couple days of each other, causing concern on the client’s part. If this sounds familiar, it’s because this sort of scenario is very common in the earlier stages of team formation. Role clarity can really help – both the team and the client experience – but it matters how the roles are clarified.

Teams are typically created in an entrepreneurial environment. When a business is first getting started, the approach to getting everything done is “all hands on deck.” There’s no formal division of labor; nobody questions who is involved or why. Role clarity and organizational structure would be superfluous given there’s more work than there are people to do it. Once the business has reached certain critical growth and survival milestones, more team organization is required to meet clients’ expectations. While the business success should be cause for celebration, it’s often accompanied by a certain amount of anxiety for team members as their roles shift. But, there are benefits to role clarity.

The benefits of role clarity

At its best, role clarity:

When advisors begin sketching out an organizational structure and defining roles in their firms, they often start by assessing the skill set of each team member and defining roles that capitalize on those strengths. However, that approach overlooks the fact that effective role clarity starts at the top – with the firm’s value proposition – and rest of the decisions cascade down from there. Think about it in this order instead: When analyzing which roles are required to support the critical workflows, advisors need to realize that their own role has to evolve. For many advisors, this includes adopting a new mindset and developing new skills. According to Cerulli’s 2014 Mega Team’s research, “A larger headcount broadens a lead advisor’s job description to include responsibilities such as: But the role involves more than day-to-day management functions. Those who step up as a leader also set and communicate the practice’s long-term strategy, motivate and coach employees, nurture the practice’s desired culture, and create an environment of execution and accountability.”

Going back to our advisor, Julie Rainmaker, she recognizes she has role clarity issues at two levels: Although Julie’s new role is going to encompass responsibilities that are a far cry from the interests and skills that originally attracted her to the industry and helped her reach her current level of success, she understands that her future and that of her team, business and clients are intertwined and rely on effective team development.

In a perfect world, role clarity starts at the beginning of building a team. In practicality, role clarity usually gets ironed out further down the road. What’s important is realizing how the business’ ongoing success relies on clear intertwining of the value proposition, the workflows that deliver on it, the roles that support it, and the team members that fulfill it. In many cases, this requires role clarity and changes not only for team members, but also for the advisor.