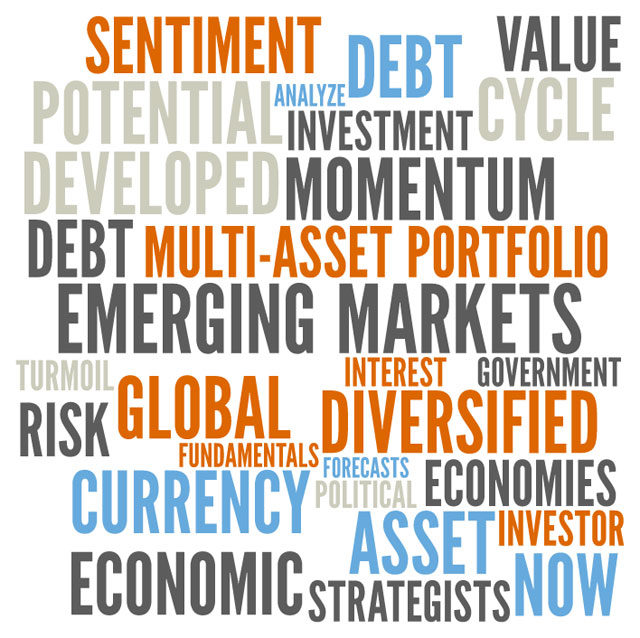 Van Luu, Head of Currency & Fixed Income Strategy delves into potential opportunities in emerging markets debt and currencies. You can read the full post below or on the Russell Blog. After years of difficulties and underperformance, emerging market (EM) assets have the makings of a potential turn-round. Here I explain our strategists’ long-term positive view on EM currencies and bonds, using our investment strategy process focusing on the three aspects of business cycle, asset valuation, and investor sentiment (Cycle, Value and Sentiment) that my colleague James Barber recently wrote about here. In recent years, EM bonds and currencies have been weighed down by a number of damaging developments within their borders. These developments include persistent inflation pressure, political turmoil and lackluster productivity growth. This year, we have seen a clear improvement in the economic fundamentals of EM countries. For example, Oxford Economics forecasts that emerging market countries’ gross domestic product (GDP) will grow by 2% more than developed countries in 2016[1]. Russell Investments thinks that this improvement could set up the currencies and government bonds of EM countries for a potentially prolonged period of better performance. We believe that the asset class most likely to benefit from the turnaround in EM economic fortunes is local currency emerging market debt (EMD). The latter consists of bonds issued by the governments of EM economies in their domestic currencies, including the Brazilian real, the Mexican peso, the Russian ruble and the Turkish lira. A framework for assessing local currency EMD Granted, some of the headline news from these countries is still disturbing, not least the recent coup attempt in Turkey and the spread of the Zika virus in Brazil. To separate the important from the irrelevant variables, our team of strategists analyze all asset classes through the lens of Russell Investments’ Cycle, Value and Sentiment (or CVS) framework. Here is what this approach can tell us about the prospects for local currency EMD right now. Value: Our valuation measures suggest that local currency EMD as an asset class is attractively priced compared to history. This is mainly due to the currencies of these countries. We believe that EM currencies have declined sufficiently to be significantly undervalued. As of the end of June 2016, the inflation-adjusted trade-weighted exchange rates of important EM economies like Mexico and South Africa are well below 10-year averages[2]. Over a 3-5 year horizon, I think EM currencies are more likely to be stable or stronger against the U.S. dollar. Cycle: Longer-term structural weaknesses in these economies persist, but recent economic improvements are encouraging. Leading indicators in EM economies have drifted up in recent months, signaling better growth dynamics in the second half of 2016. For example, inflation is slowing in countries such as Brazil and Russia[3]. This is positive for the currencies and economic growth, allowing central banks to cut interest rates from a high level. On the negative side, we are wary of the potential risks from a pronounced slowdown in China on EM assets and any upcoming potential interest rate hikes by the U.S. Federal Reserve (the Fed). Sentiment: Momentum is turning positive for the asset class. A commonly used index used to measure the performance of the asset class is the JP Morgan Emerging Market Government Bond (GBI-EM) Global Diversified Index. It is up more than 18% year-to-date as of August 16 after having declined precipitously for the previous 18 months.

Despite potential setbacks noted earlier, our strategists believe the longer-term picture for EM currencies and local currency debt is positive. Relative to developed market bonds, the potential risk-reward balance of local currency debt now appears more favorable. Of course, whether you are an institutional investor or a private end investor, timing the right entry point into such an asset class is always important and difficult, often best aided by guidance from an expert. The main message from our CVS process is that these assets may be a very sensible part of a multi-asset portfolio.