The last couple of months have been quite volatile for capital markets – and bond markets1 were certainly no exception. Below is a summary of our latest thoughts on the recent turbulence in high yield markets.

After seemingly endless discussion over the inevitably of rising interest rates, to a chorus of yawns, the Fed finally raised the Fed Funds rate by a quarter point in December. Market reaction was muted immediately following the Fed’s decision and interest rates across the yield curve were little changed as markets had largely priced in the move at the front end of the yield curve. Longer term rates didn’t move much either given other market dynamics (e.g. low inflation expectations, decreasing interest rates outside the U.S. and rising credit spreads) at play. While the Fed stole the headlines, the real action in the bond market was happening elsewhere: in high yield credit markets.

Biting at the apple in credit

The U.S. high yield market has been on a roller coaster ride over the past year.2 Several factors contributed: As a result, by January 2016, high yield bond spreads rose to levels that are typically unsustainable for any length of time. Point in case: on January 20th, the U.S. high yield average spread6 closed at 790 basis points over Treasuries. 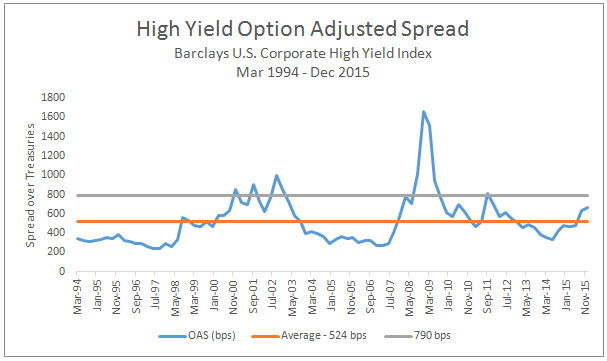 To put this into perspective: the high yield market has only broken through that level 5 times in the last 12 years.7 In all 5 of those historical cases, investing in high yield immediately when the spread widened beyond 790 produced a positive return over the next 2 years with cumulative returns ranging from 4% to 48% and an average cumulative return of 27%. As such, we’ve been observing managers we research actively rotating portfolios toward high yield credit. In addition, some managers have increased allocations to areas such as European bank capital and midstream energy, which despite the recent negative news headlines, we believe these sectors appear to be some of the most attractively priced parts of the market for the risk that they represent.

Of course, the bond market is composed of more than simply credit and there is merit to diversifying sources of return within the fixed income portion of an overall portfolio. In particular, we believe some attractive opportunities exist in the relative value currency space for investors with commensurate risk tolerance. Specifically, among commodity currencies, the Canadian dollar appears significantly undervalued, while the Australian and New Zealand dollars seem to be among the most overvalued currencies in G10.8 Similarly, within currencies that typically do well when markets retreat, the Japanese Yen currently appears undervalued, while the Swiss franc seems highly overvalued.

The Federal Reserve’s decision to begin raising interest rates didn’t have the momentous impact on bond markets that many pundits anticipated. Instead, short-term interest rates have moved little and long-term rates have stayed steady and now fallen in 2016. U.S. high yield credit markets have experienced some gyration – though that was already well under way before the Fed’s decision. With all of this in mind, we believe investors should stay the course, but consider a diversified bond exposure that is able to nimbly navigate the risks and opportunities in today’s bond market.

6 Spreads are represented by the average option-adjusted spread on the Bloomberg U.S. Corporate High Yield Index over Treasuries.

8 G10 refers to The Group of Ten – the 11 countries (Belgium, Canada, France, Germany, Italy, Japan, the Netherlands, Sweden, Switzerland, the United Kingdom and the United States) that co-operate on global financial matters.