As we have said before on this blog, active and passive both can have a role to play in helping investors achieve their desired financial outcomes. The key is ensuring that both investment approaches are used insightfully, with sensible expectations around risk and return, and as part of a well-managed portfolio. Sometimes, that’s easier said than done. The challenge often comes in reconciling your experience with your expectations and, particularly with active investing, assessing whether you should stick with it during the “hardest” times to potentially benefit from the more rewarding times. The cyclicality of active management So much of what we see in capital markets is cyclical. The same applies to enthusiasm around active management. When active manager results have a soft patch, the media is awash with obituaries for active investment. When results are stronger, triumphalist investors (maybe even your neighbor?) let everyone know how much money passive investors have left on the table. And so it goes, back and forth. As an aside, for those of us who observe and evaluate investors for a living, many of these analyses can be painfully off-target. They tend to use limited data sets and poorly formed hypotheses to draw overly broad conclusions. A recent example is a New York Times article, which found that the fact that no managers were top quartile five years in a row somehow “(supports) the considerable body of evidence suggesting that most people shouldn’t try to beat the market.” However, I would argue that even the most committed proponent of active management would never claim that top quartile performance five years in a row is a sensible ambition, much less an expectation. The last few years have certainly been hard times for active equity investors.  In fact, market results show that the past four years ending December 31, 2014 have been some of the worst since 1999 for those attempting to capture an excess return in equity, and in particular in U.S. Large Cap and Global Equity manager universes. A manager universe is a peer group of investment managers who have the same investment style. Manager universe data is often used for comparisons and evaluating the performance of money managers. We see a few simple reasons for this: I will talk about each in turn.

Security selection opportunity is not a constant

The magnitude of opportunity to make money through security selection ebbs and flows over time. One great way to measure the opportunity is by observing the performance gap between higher performing stocks and lower performing stocks. The larger that return difference, the more opportunity for active managers to add value from selecting the better stocks. On the other hand, as the gap shrinks so does that pool of active return opportunities. Using this measure, the data reveals that 2011-2014 has seen the smallest return difference we have seen in the last couple of decades, exceeding the 2003-2006 period in which opportunity was similarly compressed. Given this backdrop, you would expect it to be challenging for stock pickers to make much of an impact. 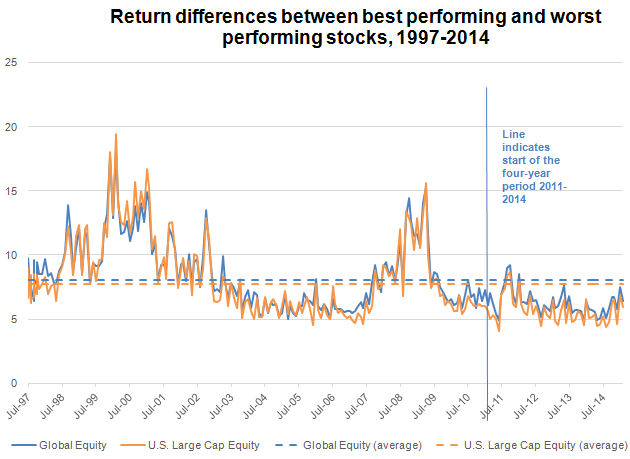 Over the same 2011-2014 period, active managers faced another challenge as shown in the subsequent charts and narrative: some of the investment positions that were favored by a meaningful portion of active managers in the Russell universes were significant underperformers relative to the broader equity market.

Active manager biases were most evident in global equity, where the longstanding active manager tendencies to overweight emerging market equity and underweight U.S. equity both took a toll on active returns. In fact, Russell’s proprietary database of active manager performance and holdings shows that over the past 12 years as of December 31, 2014, regardless of how well or poorly the U.S. market did relative to the rest of the world, about 75% of global managers were underweight the U.S. relative to the Russell Global Index. A bias of similar magnitude toward an emerging market overweight has also been in evidence among global managers over the past decade. 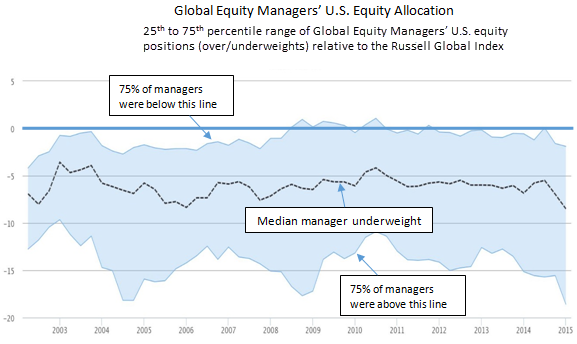 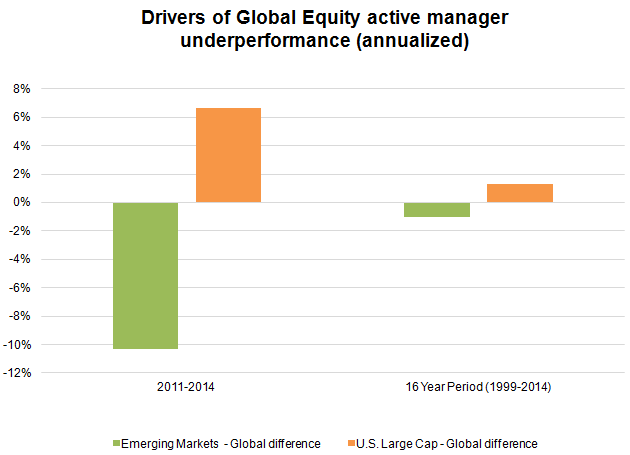 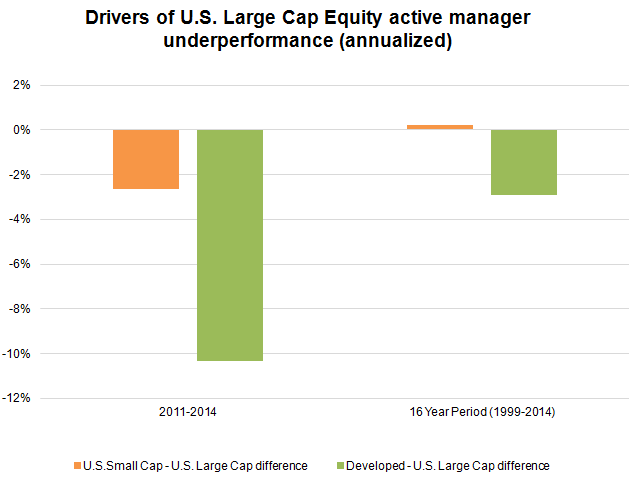 Even skill couldn’t bail you out

These headwinds have had a substantial impact on the success of the average active manager. But what if you had access to skillful managers who could do better than the average? How much benefit would investors have taken from having exposure to a skillful or “above average” manager? Internal analysis conducted using Russell’s proprietary manager database attempts to measure this skill payoff over different periods. The study simulates how much more excess return an investor could reasonably have expected to get if they constructed portfolios with a greater than average chance of picking outperforming managers. [The study assumed the investor had a 60% chance of picking an above average manager.] This allows you to gauge whether the skill could have reasonably been expected to balance out the headwinds of an otherwise hostile environment. In general, the findings were that the payoff varies widely over different time periods and that the recent past was a low point. First, the good news, though: On the negative side: Unfortunately, heroic levels of skill (much higher than was built into this study) would have been required to turn the tide. Seen in the context of the longer horizon results, this appears to have been the worst of times, but in our opinion, hardly a permanent state. 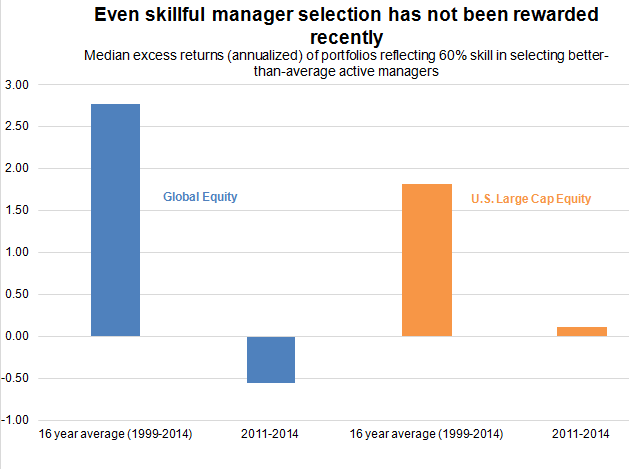 2011-2014 was undeniably a very challenging period for active equity investing. Security selection opportunity, payoffs for favored positions, and insufficient opportunity for skilled managers all weighed against investors attempting to earn a positive active return. This has led many investors to question the wisdom of choosing active management over passive alternatives. Investors should be aware, though, that none of these conditions are likely permanent (in fact, at Russell we believe that they are all cyclical), and in our opinion none imply any change in the odds of active management success over the long run. Although this fallow period may test your patience, we don’t believe it should shake your faith.