Go where most passive investors don’t: The “left over” 77% of the U.S. stock market

When taken as a whole, Russell Investments believes that U.S. equities (represented by Russell 1000® Index) are currently overvalued – and that’s been the case for some time. The price-to-earnings (P/E) ratio of the Russell 1000 Index is 19.7, compared to the P/E of 16.1 for non-U.S. equities (Russell Global ex-U.S. Large Cap Index) as of May 31, 2016. A more forensic look at the broad U.S. equity market reveals, however, that two extreme segments of the market have posted particularly strong returns over the last 12 months, making the rest of the market look expensive: What about the rest of the U.S. stock market – the remaining 77% of listed large cap companies included in the Russell 1000 Index? Those 794 companies returned a mere 0.2% in the 12 months ending May 31, 2016. Taken all together, the Russell 1000 Index returned 4.4% for that period.

Source: BNY Mellon. Data as of 5/31/2016. We believe this majority portion of the market includes companies with attractive valuations and return opportunities – companies with growth potential and defensive characteristics that aren’t overvalued. As of May 31, 2016, that group of 794 companies had a P/E ratio of 18.2, compared to the 27.4 P/E ratio of the combined Internet & Software and Utilities, Consumer Staples and REITs companies and the 19.7 P/E ratio of the overall Russell 1000 Index. Of course, not every one of those companies is undervalued – some are cheap for a reason. We believe that skillful active managers can distinguish between those companies that have the potential to add value over passive investments and those that don’t. 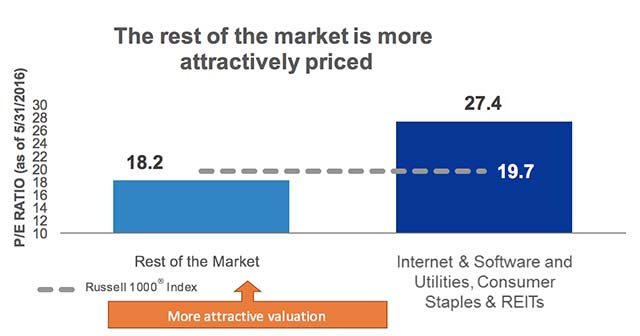 Although the U.S. large cap market appears expensive based on P/E ratios as of May 31, 2016, a deeper analysis of the Russell 1000 Index reveals that two pockets of the market representing only 23% of the total market cap of the Index are driving much of that valuation. Strip away those extremes and the valuation of the remaining 77% of the Index appears more reasonable, offering potential fertile ground for skilled active managers to identify the winners from the losers.