It’s March and, at least in the U.S., that means bracket-busting basketball is upon us. Year after year, emotions overrule logic and fans bet “their team” will go far in the tournament. It turns out, this type of bias extends beyond the realm of basketball brackets: it’s pervasive in investing too. As the chart below shows, the average U.S. investor appears to have a “home country bias” when it comes to their investment portfolio.1 According to the Investment Company Institute, within the stock part of their portfolios, the average U.S. investor chooses to allocate 77% of their retirement assets to mutual funds that invest exclusively in U.S. companies – and only the remaining 23% of their money outside the U.S. 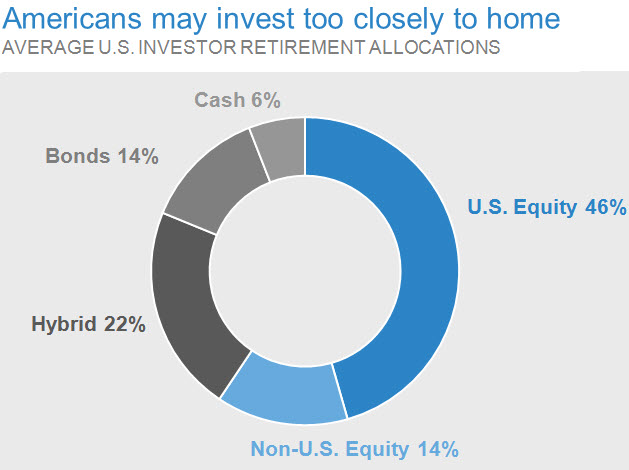 Source: 2014 Investment Company Fact Book, Investment Company Institute.
Hybrid funds invest in a mix of equity and bond funds. Unfortunately, that most closely reflects the opportunity set available to investors in 1970 when the U.S. made up 66% of the global investable opportunity set!2 At the end of 2014, the U.S. made up only 52% while Non-U.S. Developed Markets made up 37% and Emerging Markets 11%.3 Which raises the question, “how can we help investors take full advantage of the global opportunity that exists?” At Russell, we believe global diversification should be an integral part of an investor's portfolio. We have shared some reasons here. In this post, I’ll share some additional factors affecting the global landscape that I hope will bring this global opportunity to life for investors.

Future opportunities may lie where population and productivity intersect 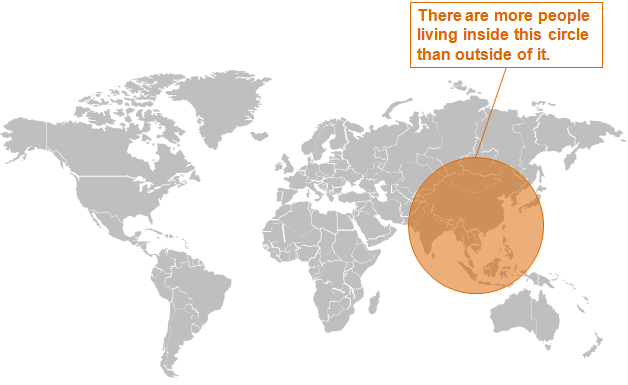 Source: “2012 World Population Data Sheet”, Population Reference Bureau. Did you know that there are more people living inside the orange circle in the map above than outside of it? All of North America, South America, Africa, Australia and Europe combined have fewer people than this circle. China is the world’s most populous country with 1.36 billion people. India has the next largest population – 1.25 billion. The United States is the third most populous country, with 316 million people.4 Put another way, China and India combined account for 37% percent of the world’s population. To get to 50%, you simply need to add the three largest metro areas in the world – Tokyo, Japan (37 million people); Jakarta, Indonesia (26 million people); and Seoul, South Korea (23 million people).5 My beloved New York City only lands the number eight spot globally! That said, it’s important to bear in mind that population does not equal gross domestic product (GDP) – the total market value of all the final goods and services produced within a country in a year. Labor productivity is an important factor in creating opportunities, too. Those nations with large and productive populations tend to expand the economic opportunity available to investors globally.

McKinsey estimates that by 2025, another 1.8 billion people – mostly from “the emerging markets” – will have joined the ranks of “the consumer class” (i.e., that group of people that has enough income to buy discretionary goods and services). Historically, as populations have urbanized, they have become wealthier, the local economy grows, the country – and entrepreneurs in it – look for funding to continue to grow and pretty soon investors abroad have opportunities to participate in that local growth. This is happening already in emerging markets. As the chart below shows, they accounted for 39% of the world’s GDP in 2013 and are on pace to contribute even more by 2019.

Source: International Monetary Fund, World Economic Outlook October 2014.
Gross domestic product, current prices (U.S. dollars). Of course, the country at the top of most everyone’s mind when “emerging markets growth” is mentioned, is China. Indeed, as the world’s second largest economy (behind the U.S.) China is a major contributor to emerging market – and global – growth. But lately, I’ve been getting questions from investors about how slowing growth in China may impact global economic growth. It is true: the days of double-digit GDP growth that we saw last decade in China have tempered. But, “slowing growth” is a relative matter. Consider that in 2000 the Chinese economy was just over $1 trillion in size. By 2013, Chinese GDP had crossed $9 trillion.6 Growing anything at the same rate once it’s gotten 10x bigger is hard! And keep in mind that, although China’s growth was “only” mid-single digits (7.4%) in 2014, that’s still considerably faster growth than what the U.S. (2.4%) and the Euro Area (0.8%) posted last year.7 Even with China growing at a slower pace than it did last decade, emerging markets remain an important catalyst for global growth.

Finally, the integrated and global nature of our world has changed the investment opportunity set for investors. With companies and brands Americans use every day actually owned, operated and deriving revenue in countries outside the U.S., it makes sense to consider how our investment portfolios should potentially adjust to reflect the changing environment – and changing opportunity set. For example, the world’s largest food producer is Nestlé. I don’t know about your home, but their brands show up in my household all the time – Nespresso, Purina, Butterfinger, KitKat, Dreyer’s ice cream and Poland Spring. These are such common brands that we could easily be forgiven for assuming that Nestlé is an American company. It’s actually Swiss. Or, take Apple. It’s the world’s largest brand – and yes, it’s an American company in the sense that it’s domiciled in the U.S. But Apple actually generates only 38% of their revenue from U.S. consumers. The remaining 62% comes from outside the U.S., split pretty evenly between emerging markets and developed ex-U.S. markets.8

As the world continues to become more integrated and emerging market populations join the ranks of consumers, it’s likely we will continue to see market dynamics shift and the global opportunity set grow. American consumers focused only on opportunities within our 50 states may miss out. Armed with these statistics, make sure your clients aren’t among those investors with a home-country bias. 1 2014 Investment Company Institute Factbook. 2 S&P Global Broad Market Index as of 1970. 3 Russell Global Index as of 2014. 4 The World Bank  5 World Atlas 6 International Monetary Fund (IMF) World Economic Outlook Databases, October 2014. 7 International Monetary Fund (IMF) World Economic Outlook Update – An Update of the Key WEO Projections, January 2015. 8 Factset.