How low can oil go?

According to our investment manager research, the same bearish factors that surfaced in 2015 continue to persist: a market that is estimated to be oversupplied to the tune of 1 million to 2 million barrels a day (MBD), posturing by Saudi Arabia and other OPEC (Organization of Petroleum Exporting Countries) members as they defend market share over price, U.S. shale production that remains resilient in spite of significant declines in rig activity3, a strong US dollar (USD), and consistently bearish sentiment by investors.

We believe that many of these forces should begin to shift, and the decline into (and below) $30 a barrel may expedite the adjustments necessary to push crude oil prices back into a higher equilibrium range.  Why do we think this?

First, there is significant financial pressure on non-OPEC suppliers.   The majority of non-OPEC oil production requires prices well in excess of $30 a barrel to operate profitably. As noted in the chart below, Bank of America Merrill Lynch (BofA Merrill Lynch) estimates the long-term breakeven price to be closer to $80 per barrel for non-OPEC suppliers.4 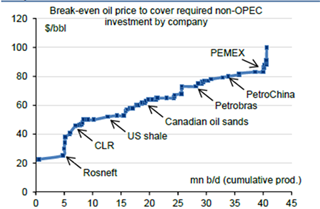 Secondly, global production figures have yet to respond to significant cuts in producer capital expenditure and rig activity. U.S. shale, in particular, has held relatively firm at 9.2MBD for the last three months (through December 2015) after falling from a record high 9.7MBD last summer.5 Efficiency gains, financing lifelines and hedging activity have been credited for the resilience of U.S. shale producers, but we believe their tolerance for low prices will be tested in the coming months. Cash costs, or the absolute minimum price required to keep operations afloat, have come down in recent months, but our research still estimates the $20 to $30 range to be the most efficient for shale producers.

Additionally, according to our internal research and discussions with external investment managers, Saudi Arabia has elected to draw from its foreign reserves (to the tune of $10-$12 billion per month in 2015) instead of defending prices as oil revenues have fallen dramatically. Iraq continues to produce at their estimated capacity and Iran is expected to add another 300,000 to 500,000 barrels a day to global markets as sanctions are lifted.

However, we see signs of a shift in 2016. In our conversations with external investment managers on January 22, we learned that a number of significant global producers have recently reigned in guidance for 2016.

While U.S. producers continue to emphasize cost reductions and growth, we believe that their time may be running short at these price levels and the market is beginning to reflect that:

So what does all this mean? We believe oil has reached price levels that are low enough to create a significant strain on producers, and that strain will inevitably lead to the fundamental changes in production in the oil supplier market to shift prices to higher. We expect that this transition will play out over the first half of 2016, and perhaps longer, before oil moves into a meaningfully higher trading range.

Given these circumstances, while we are still underweight commodities in many of our strategies, that underweight has diminished in recent weeks. From a portfolio perspective, we believe now may be a beneficial time to consider removing underweights to energy or explore opportunities to add energy exposures in 2016.

For more about how low oil prices may impact the European economy this year, see our 2016 Eurozone Outlook.

3  Rig activity and shale production searches on Bloomberg as of January 22, 2016.