How well do you know your Fed?

Sharpen your pencils because it’s time for a pop quiz: Hopefully you got a passing grade (you can check your score at the bottom of this post), but how many of these questions do you think your clients could answer correctly? The U.S. Federal Reserve is a highly influential decision-making body that has received no shortage of media coverage in recent years. And yet, many investors likely don’t know who “the Fed” really is, what they do and how to interpret their actions. And this is important. After seven years of near-zero interest rates, the Fed finally hiked short-term interest rates in December 2015 and signaled that it expected gradual increases in 2016. Since that time, however, market volatility has created considerable uncertainty around what the Fed will do next. To help make sense of it all, let’s go back to basics. In the face of a wave of economic panic in the early 1900s, the Federal Reserve was created in 1913 to act as a “lender of last resort” to the U.S. banking system. But the Fed’s responsibilities have grown over the last century. Today, when we talk about the Fed we’re typically talking about the Federal Open Market Committee (FOMC), which is the Fed’s primary decision-making body for monetary policy. Right now, all eyes are on the FOMC’s decisions around the federal funds rate, which is the overnight interest rate at which banks lend to each other. By moving this interest rate up and down the Fed is able to speed up and slow down the economy in line with what it considers to be sustainable and optimal over the long term. The FOMC typically consists of 12 members: seven members of the Board of Governors of the Federal Reserve System (including the chair), the president of the Federal Reserve Bank of New York and four of the 11 other Reserve Bank presidents, who serve on a rotating basis.1 They come together for eight meetings a year in Washington, D.C. In 2016, those meeting dates are in January, March, April, June, July, September, November and December. These meetings are widely watched by those looking for clues about the Fed’s interest rate decisions as they aim to balance economic growth and inflationary fears. At each meeting, members discuss developments in the markets and their own economic forecasts. The members debate viable monetary policy options and then vote to either maintain or alter the current policy. But just who are these members? Your clients are likely familiar with Federal Reserve Chair Janet Yellen. Yellen has considerable expertise and influence over the Fed’s decisions, but many of the other FOMC members regularly voice their views in the media, which can create confusion for investors. To help synthesize all of the Fed chatter, I created the following “who’s who” guide to the current voting members on the FOMC. These evaluations are my own personal opinion, but this summary might be helpful in your next client conversation about the outlook for Fed policy and the future path of interest rates. Click image below for expanded view 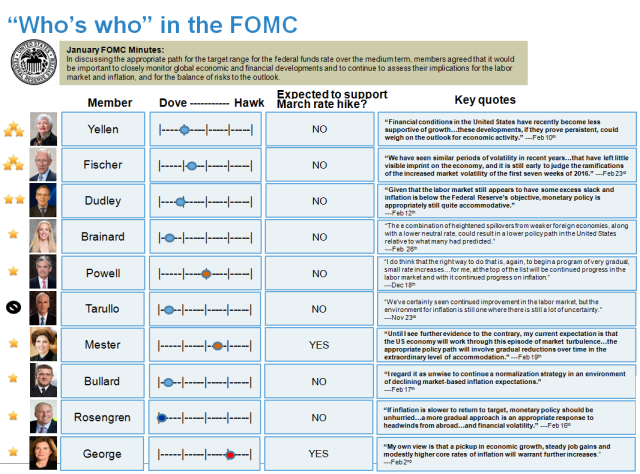 2016 voting members shown. Bold text denotes comments made since the last FOMC statement. The “star” rating represents how influential each member is in determining monetary policy. Your clients might know Yellen, but are they familiar with other highly influential figures such as Stanley Fischer, the vice chairman of the U.S. Federal Reserve Board of Governors? Fischer’s resume includes positions like chief economist at the World Bank and the head of the Bank of Israel. Fischer also taught many of the world’s most famous central bankers as a professor at MIT – including former Fed Chair Ben Bernanke and current European Central Bank President Mario Draghi. Some FOMC members are “dovish” — meaning that they generally prioritize stronger economic growth and employment over raising interest rates. Other FOMC members are “hawkish,” prioritizing rate hikes to combat current or expected inflation. Where members fall on this dove-hawk philosophical spectrum influences their views on 2016 interest rate hikes as well as the type of insight they share with the media, as captured in their key quotes. So, we have ten people with very different views. It can be hard to understand how they come together to make decisions. My fellow investment strategists at Russell Investments and I think about a “three-legged stool” that seems to influence Fed action. Those “legs” are: We believe that two of these legs, employment and actual inflation, are fairly solid today. The U.S. unemployment rate stands below 5% and measures of wage and price inflation appear on track towards the Fed’s 2 percent inflation target. The wobbly leg is the medium-term outlook. Financial markets remain very volatile and it appears difficult for the Fed to properly assess what, if any, impact this volatility will have on the real economy. As the quotes in the table above show, most FOMC members have vocalized a “wait and see” mode in the face of current market volatility. Against this backdrop, we don’t expect the Fed to raise interest rates at their meeting on March 16. That being said, we do continue to hold a cautiously positive medium-term outlook on the U.S. economy and with actual inflation starting to pick up a bit, we still anticipate two gradual rate increases later in the year.

The FOMC is clearly a complex group making complex decisions — so why should investors bother to learn the basics? I think that developing a better understanding can help investors interpret the flurry of activity, opinion and market movement that can be generated by FOMC decisions (or lack thereof). Educating your clients can enable them to manage headline-driven anxieties and understand how an increasing interest rate environment might impact investment decisions.
Quiz answers
1 Source: Federal Reserve Bank of St. Louis. In Plain English: Making Sense of the Federal Reserve Quote sources: • Yellen: Semiannual Monetary Policy Report to the Congress. Feb. 10, 2016. • Fischer: "Energy Transition: Strategies for a New World," 35th Annual IHS CERAWeek, Houston, Texas. Feb. 23, 2016. • Dudley: Remarks at the New York Fed’s Economic Press Briefing, Federal Reserve Bank of New York, New York City. Feb. 12, 216. • Brainard: 2016 Monetary Policy Forum conference.February 26, 2016.• Powell:“A conversation with a Federal Reserve Governor.” Marketplace Dec. 18, 2015. • Tarullo: “Fed's Tarullo Remains Worried by Low Inflation Despite Job Gains.” Bloomberg. Nov. 23, 2015. • Mester: “The Economy and Monetary Policy.” Federal Reserve Bank of Cleveland. Feb. 19, 2016. • Bullard: “St. Louis Fed's Bullard Discusses Changing Imperatives for U.S. Monetary Policy Normalization.” Federal Reserve Bank of St. Louis. Feb 17, 2016. • Rosengren: “Prospects for Returning to More Conventional Monetary Policy.” Federal Reserve Bank of Boston. Feb. 16, 2016. • George: : “The U.S. Outlook and Monetary Policy.” Federal Reserve Bank of Kansas City. Feb. 2, 2016.These views are subject to change at any time based upon market or other conditions and are current as of the date at the top of the page.Forecasting is inherently uncertain and may be incorrect. It is not representative of a projection of the stock market, or of any specific investment.Nothing contained in this material is intended to constitute legal, tax, securities or investment advice, nor an opinion regarding the appropriateness of any investment, nor a solicitation of any type.The general information contained in this publication should not be acted upon without obtaining specific legal, tax and investment advice from a licensed professional. The information, analysis and opinions expressed herein are for general information only and are not intended to provide specific advice or recommendations for any individual entity.

Copyright © Russell Investments 2016. All rights reserved. This material is proprietary and may not be reproduced, transferred, or distributed in any form without prior written permission from Russell Investments. It is delivered on an “as is” basis without warranty. RFS 16828