We’ve spoken in the past of the massive bet that pension plans have on rising interest rates. Well, they just rose; since the U.S. election, the 10-year Treasury yield has risen by fifty basis points (.50%). That’s a big jump in a short period.

The increase in yields means that corporate pension plans will have seen their funding level improve. Even though corporate bond yields (from which pension liabilities are calculated) have not risen quite as much as Treasury yields, a sustained increase in rates would mean significant improvement in the funding situation. For example, the funded status of our representative open and closed plans went up by 1.9% and 0.8% respectively between the end of October and the close of Friday 18th November.

Brian Frick, senior portfolio manager, LDI solutions at Russell Investments, observes that: “Funded status has been down for most of 2016, primarily due to discount rates continuing to drift lower. The increase that we’ve seen since November 8th has offset most of that, but there’s still a long way to go for most plans to achieve their funding goals. Many plan sponsors have been waiting for rates to rise before beginning or extending liability hedging strategies, so the potential for continuing increases in yields holds out a possibility of a big change in the pension picture.”

As we noted recently in this blog, low interest rates have prevented pension plans from fully recovering from the impact of the global credit meltdown of 2007-2008. That may change if the past week’s move turns out to be a signal of a re-alignment to a higher level.

When funded status improves, pension plans tend to want to buy more bonds. In many cases, this connection is automatic thanks to de-risking glide paths set up under a liability-responsive asset allocation (LRAA) strategy. The LRAA approach is now widespread, especially among plans that have closed to new entrants and/or frozen new benefit accruals. For such plans, shifting from equities to bonds occurs as a matter of course when funded status improves.

Even plans that do not make the move automatically will tend to apply the same logic in their decision-making: the closer to full funding they get, the less need there is to chase returns, and the more fixed income becomes attractive as a way to match asset behavior to liabilities.

So while the reaction of many investors to the prospect of a significant increase in government borrowing in order to finance the policy agenda of President-elect Trump has been to sell existing Treasury holdings, corporate pension plans are likely to find themselves on the other side of that trade.

Is there still a massive bet on rising rates?

One of the most-read posts in the four-year history of this blog was “Pension plans have a massive bet on interest rates rising”, which highlighted that, thanks to a combination of forward-curve pricing and a term premium, “a bet on rising rates is one that has historically had the odds stacked against it and investors ought to be wary before assuming that a rising rate environment means easy gains.” If pension plans do take advantage of higher yields to increase their bond allocations, there will still remain, in aggregate, a significant bet on rising rates.

The chart below puts recent developments into that broader context. Each line shows the following: 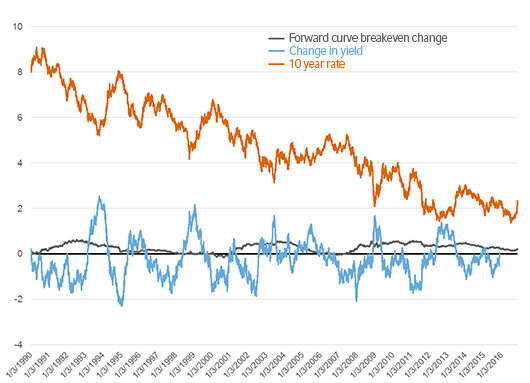 So even though yields have risen , they remain low compared to history. What’s more, the increase in yields priced in to the market is not significantly different than it was before the election. And there is, clearly, plenty of room for more change as the new administration is formed and takes office in the new year. So even though things have changed, the picture remains a complex one for pension plans.