Keep calm and carry on in the face of market volatility

With market volatility in recent weeks spiking past the previous highs of August/September 2011, I thought it would be helpful to revisit a post I wrote almost a year ago on the subject. Back then I noted that 10% U.S. equity market corrections have occurred quite regularly over the years. In fact, market corrections of more than 10% have occurred 21 times in the last 35 calendar years (based on Russell 1000® Index calendar-year returns from 1980-2015). We have now, as of August 24, 2015, experienced an 11% drop year-to-date. Many of the advisors we work with have been fielding calls from nervous investors as volatility has surged. Gyrations like we’ve recently seen almost always raise investor anxiety, but this is the moment to reaffirm that staying invested and enduring the dips can, in hindsight, often be the best decision. One way you can help clients remember this is by putting the recent rise in volatility into historical context.

Note: All year-to-date data is through 8/24/15. Indexes are unmanaged and cannot be invested in directly. Returns represent past performance, are not a guarantee of future performance, and are not indicative of any specific investment. So, market corrections are fairly common, and so are positive upswings. The U.S. equity market is resilient and has historically bounced back quickly from a correction. The chart below demonstrates these points as well, showing the Russell 1000® Index return and largest drawdown for each calendar year. 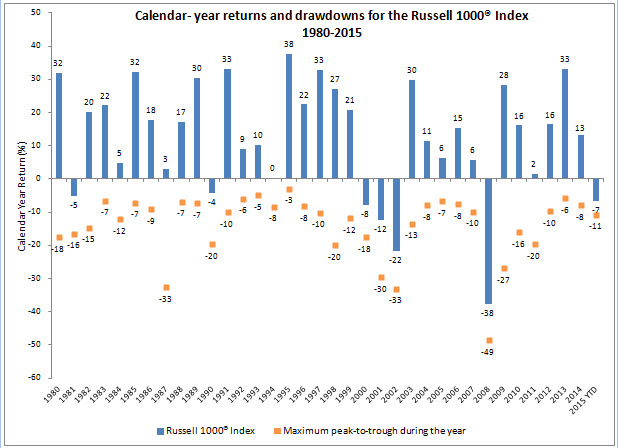 This chart helps support the point that staying invested through volatile periods has been a more rewarding strategy than selling during a correction year over the last 35 years. Indexes are unmanaged and cannot be invested in directly. Returns represent past performance, are not a guarantee of future performance, and are not indicative of any specific investment.

In the latest Q3 update of our Global Market Outlook dated June 25, 2015, Russell’s strategy team said that the advent of Fed interest rate tightening would likely cause some market volatility, and that has proven prescient. However, China’s currency situation has added more fuel to that fire. As we have seen in recent weeks, the market’s mood swings have been fast and furious – with intraday swings of 6% or more one way or the other. Fears of an economic slowdown in China may be offset by a dovish statement by a Fed governor. Or it can go the other way with a hawkish comment. So don’t be surprised if we see continued volatility in the coming weeks. In regard to China, our chief market strategist Erik Ristuben believes it faces tremendous structural challenges as its growth slows. He believes China is trying to limit the short-term pain the economy currently faces by delivering more monetary easing. He believes China can manage its current issues, which is one reason why we believe the current softness in its economy does not pose a serious threat to the global economy in the short-term. As always, Russell’s team of strategists will continue to monitor events closely and share our thoughts with you. For now, though, all eyes are on the Fed and their two-day meeting in mid-September. In the meantime, stay calm.

A market sell-off will always raise some level of anxiety for investors. Help your clients avoid panic-induced sell-decisions by reminding them that market corrections have historically happened on a very regular basis and are part of being invested in equity markets. Historical context, a well-diversified portfolio and a long-term plan can be strong antidotes to volatility-induced fear.