Life in a low-return world: To hedge or not to hedge?

At Russell Investments, we believe we will see low returns over the next seven to ten years. Pension funds, endowments and individuals may have to adapt their behavior and strategies or else risk failing to reach their objectives.

Currency risk is often viewed as a by-product of the broader investment strategies that an investor has employed, rather than an asset class in its own right. As such, it can be overlooked in multi-asset portfolios.

In a low-return environment, there are four strategies that may be employed to manage currency risk and help to make the most of the return opportunities from currency:

If a portfolio contains unhedged international assets, then an exchange risk is being automatically taken without being paid, i.e., unrewarded risk. This currency exposure is only a by-product of the asset exposures, not a clearly articulated currency investment strategy from which you expect to earn returns. For example, a typical global equity portfolio (from a U.S. investor perspective)1 implicitly holds a long position in a basket of currencies consisting of roughly:

We believe currency hedging using foreign exchange forward contracts is a useful way to reduce unrewarded risk. By selling an appropriate amount of foreign currencies forward, hedging creates positions that move in the opposite direction to the currency exposures in the underlying portfolio. Currency hedging can be performed in two different ways: statically or dynamically.

In a static currency hedging program, the currency hedge percentage remains constant (at 50%, for example). This percentage will not waver, even in the event of economic changes or shifts in market sentiment.

When compared to an unhedged position, static hedging often reduces unrewarded risk without giving up expected return over the long term. In the chart below, we’ve plotted the historical risk-return outcome of a standard global equity portfolio against the same portfolio, but statically hedged at 25%, 50%, 75% and 100%.

The chart shows that, between December 1999-June 2017, increasing the currency hedge percentage would have reduced portfolio risk without impacting realized portfolio return.2 As we can see, the unhedged portfolio has a standard deviation of 17.1%, whereas the 100% statically hedged portfolio has 14.3%, a 17% reduction in risk. That’s why some academics have called currency hedging a “free lunch”2.  Periods of market turbulence often see investors pile into so called ‘safe-haven’ currencies (such as the U.S. dollar). Hedging back to the U.S. dollar can be very beneficial for portfolio diversification properties because safe-haven currencies typically appreciate when risky assets fall. 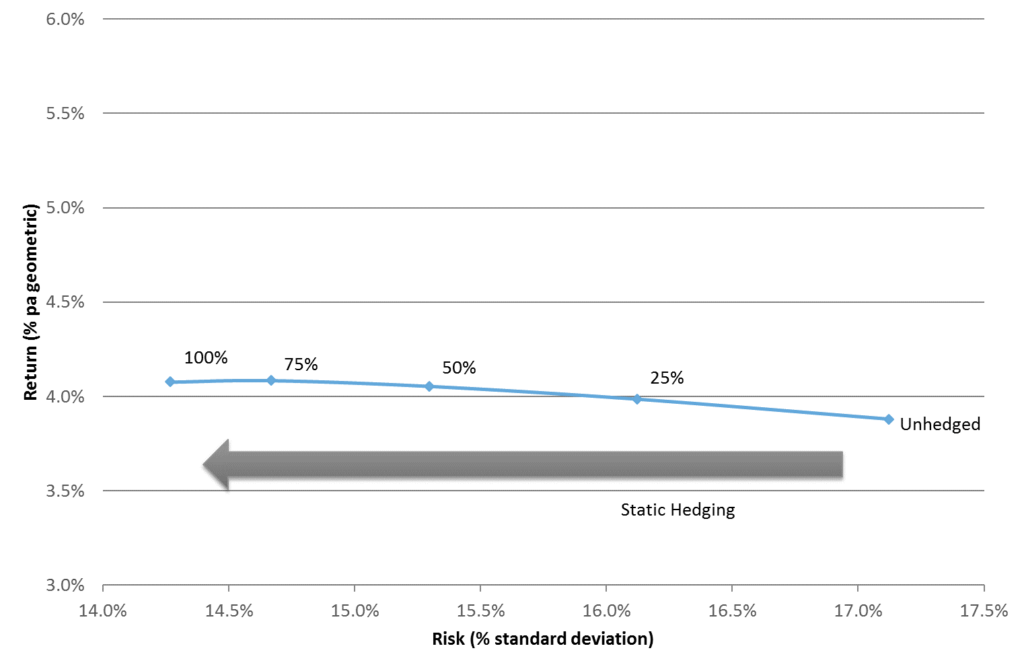 Dynamic currency hedging
Under certain circumstances, the sensible decision to protect against unrewarded currency risk by static hedging (rather than having unhedged currency exposure) can prove counterproductive. We know that currencies often go through prolonged cycles of appreciation and depreciation. As we can see in the chart below, the euro experienced an extended period of strength against the US dollar between 2001 and 2008, appreciating from 0.85 to nearly 1.60. In so doing, the euro went from 20% undervalued against the dollar to 20% overvalued compared to purchasing power parity, a common measure of “fair value” in currency markets. Hedging euro assets back to the U.S. dollar in periods of foreign currency strength can be detrimental to portfolio returns. 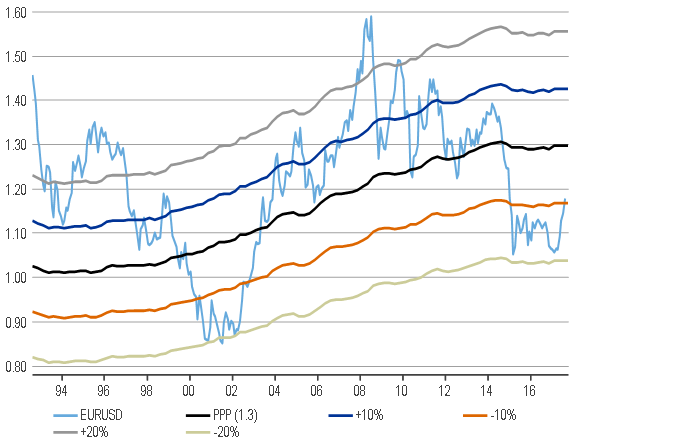 The Purchasing Power Parity (PPP) exchange rate, as measured by the OECD and sourced from Thomson Reuters Datastream, is the rate that would equalize the purchasing power of two different currencies. It is sometimes used by economists to gauge the “fair” value of an exchange rate.

Unlike static currency hedging, dynamic currency hedging percentages can vary on a regular basis.  This is because the hedging percentage is altered as market circumstances change. For example, when the U.S. dollar is expensive against foreign currencies, one may want to hedge it less than average. This is actually the case at the moment, as we saw in the EUR/USD chart above, where the euro is around 10% undervalued relative to purchasing power parity. A dynamic hedging overlay would reduce the hedge ratio relative to a “neutral” reference point.

We believe that dynamic hedging can preserve most of the risk reduction obtained from static hedging while adding significant returns over a full market cycle, as shown in the chart below. This is achieved by hedging less when the U.S. dollar is expensive and/or is in a downward trend against foreign currencies and more when the opposite is true. Successful dynamic hedging therefore may circumnavigate unexpected and large negative cash flows, reduce portfolio risk and raise the return from international equity investing, thereby enabling investors to capture the international equity premium more efficiently. 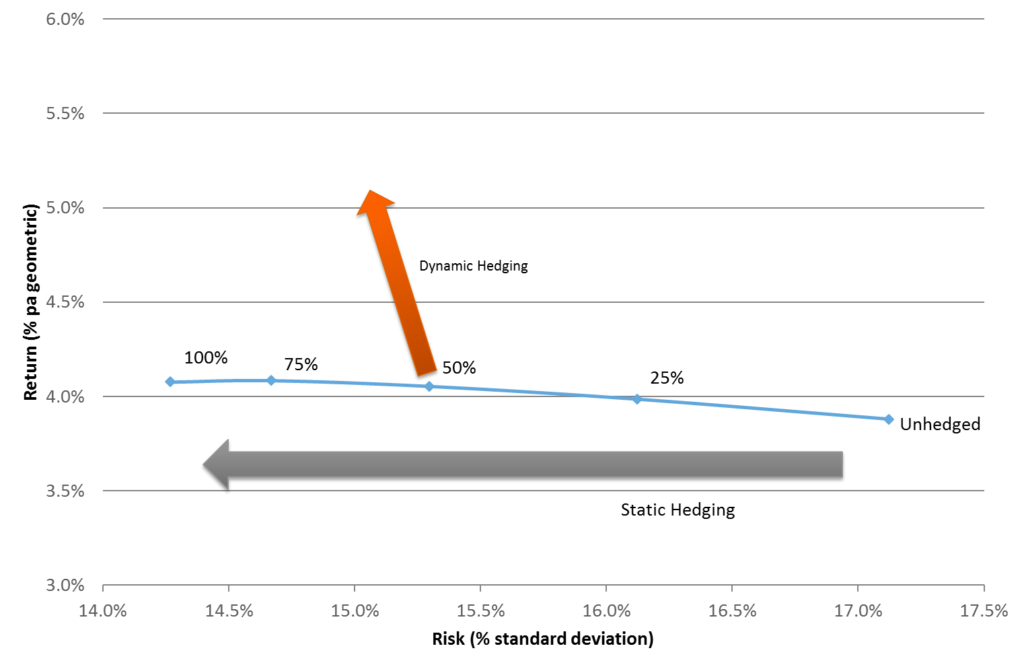 Source: Thomson Reuters Datastream, Russell Investments, as of June 2017.
Dynamic hedging is for illustrative purposes only.

1 We have defined a ‘typical global equity portfolio’ as per the holdings within the MSCI World Index, as at 31 July 2017

3 As measured by the annual standard deviation.